Fredriksstad mek Verksted, Norway, is to build another 42,000-dwt RO/RO ship for the carriage of forest products and cars on Seaboard's cross-Pacific trade. Like the first two vessels in the series, Skaugran and Skaubord delivered from the same yard two years ago, more than two-thirds of its 4,000-car payload will be stowed on hoistable MacGregor decks of the lightweight Omega construction.

The hoistable decks are a principal feature of the bold Seaboard concept, because in effect, they enable a vessel primarily designed for the carriage of packaged lumber and other wood products on the outward Vancouver-Japan voyage, to transport cars on the backhaul—and in quantities comparable with those carried by a PCC (Pure Car Carrier).

Some changes, based upon two years' operational experience with the first vessels, will be incorporated in the newbuilding. They include alterations to the internal cargo handling and stowage layout involving a 25-percent increase in the installed area of hoistable MacGregor decking.

The economic success of the Seaboard vessels — which, at 42,000 dwt makes them the world's biggest RO/ROs — is due in large measure to their very high utilization carrying cars on the backhaul, and the hoistable decking contributes directly to that success.

Thus its contribution to this third in the series will be even larger than it is with the earlier ships.

Key to the weight-saving properties of the Omega design lies in the configuration of its loadbearing members which, in crosssection is akin to the Greek letter "Omega." It has now been specified for installation on some 15 vessels, and this repeat Seaboard order provides continuing proof of its success under operational conditions.

The Seaboard Company is a prominent Canadian producer of forest products; its London company will operate the new vessel under British registration. 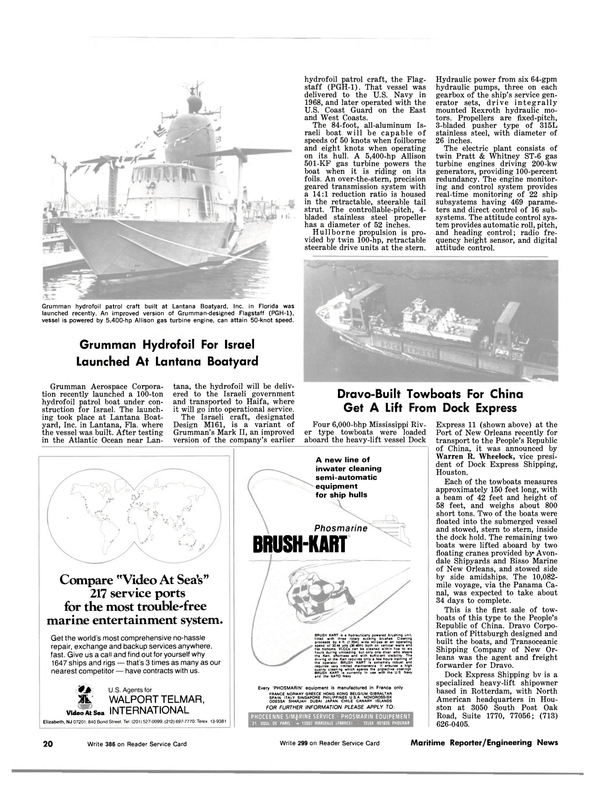