The regular monthly meeting of the Long Beach/Greater Los Angeles Section of the American Society of Naval Engineers was held recently at the Officer's Club of the Los Alamitos Armed Forces Reserve Center. The meeting was convened by Section chairman Capt. J.A. Gildea, USN, who gave a comprehensive report on the proceedings of the Annual ASNE Day in Washington.

Before starting the technical portion of the meeting, Capt.

Gildea, acting in behalf of ASNE president Vice Adm. Bryan, USN (Ret.), presented a Certificate of Appreciation to Robert Malone chairman of the Section for the 1979-80 term.

In the absence of program chairman Carl Erickson, Capt.

His topic was "Combat Systems of the U.S. Navy in Foreign- Built Ships." Mr. Hill commenced by pointing out that in the foreign area there are several shipyards building modern hull designs in the 1,000- to 2,500-ton categories, and the U.S. shipyards are not. The foreign navies have become acquainted with U.S. weapons systems by virtue of transfers of more than 115 destroyers of the Fletcher, Gearing, and Sumner classes, with Brazil, Greece, Spain, Taiwan, and Turkey accounting for more than half of the vessels transferred.

The current U.S. Navy is comprised largely of combatant vessels of over 3,500 tons, whereas the majority of our foreign allies are building vessels of 2,700 tons and less. We have exported weapons for installation by foreign shipbuilders in foreign yards, primarily for ships of that country's navy. Now we are being confronted with third country programs such as ships for Turkey built in Germany, ships for New Zealand and Saudi Arabia constructed in Italy, all wanting U.S.

The author pointed out that there appears to be a world market for naval ships in the 1,000- 2,500 ton sizes, and there are none of these currently being produced in the U.S. From this he deduced that, providing U.S.

shipbuilders are or can be competitive, perhaps our shipyards should become interested in production of these smaller ships for our foreign allies. 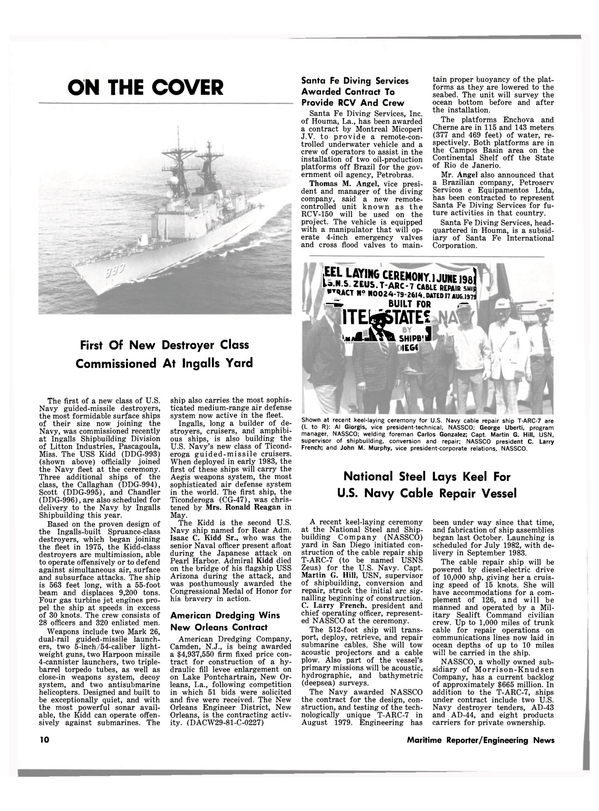