Over 550 companies will have exhibits at Fish Expo from October 26-29, 1983, at The Seattle Center in Seattle, Wash. This will make for the largest Fish Expo ever, topping the 535 companies that exhibited when the show was last in Seattle in 1981. Fish Expo alternates annually between Boston, Mass., and Seattle.

"After a drop in exhibitors in 1982, sales have come back strong for this year's show," said J on Stamell, general manager of National Fisherman Expositions, Inc., which runs the show with National Fisherman Magazine's sponsorship. "Suppliers have begun to speak with optimism. It seems that the economic recovery is beginning to find its way to the commercial fishing industry," Mr.

Fish Expo has become an outstanding educational opportunity for fishermen, processors and industry suppliers, and the 1983 program is also the largest ever.

Thirty-one seminars will take place at the Mercer Forum adjacent to the Exhibition Hall, the show's second largest exhibit area. The seminars will feature over 72 speakers from all facets of the commercial fishing and seafood processing industries.

Highlighting this year's seminars program is the Inshore Fisheries Conference, co-sponsored by National Fisherman and Pacific College Sea Grant. The Conference which takes place in the mornings will present 21 sessions covering four major areas of concern to fishermen who work within 200 miles of the coast: direct marketing; underutilized resources; vessels and gear; handling, packaging and on-board quality control.

The remaining 10 sessions held in the afternoons will cover topics of interest to offshore fishermen as well as processors, fish farmers and politicians.

New to this year's show are four exhibitor seminars and a film series to be held in Room V, Wednesday through Friday, from 9:00 am to 4:00 pm. Exhibitors were asked to submit seminars of their own for presentation outside of the regular program. The four seminars being presented cover fish detection, vessel insurance, safety and Scottish seining. The film series will be ongoing during Fish Expo and includes a Norwegian fish-farming film.

At the last Seattle show 16,623 attended and to get them into the show faster and provide more service, a new registration system has been introduced. The emphasis is on preregistration which is free to all who complete and mail the appropriate preregistration form which is available in Fish Expo advertisements, from exhibitors or from one of the Fish Expo offices. To those who register at the door, there will be a $5 registration fee.

Attendees at this year's show will receive name badges identifying their occupation which should result in better presentations from exhibitors. Other services new to the show include large discounts on airfare, airport transportation and tours while in Seattle.

The most visible new service will be the Fish Expo Visitor Information Center which will help with restaurant, theater, Seattle tour and Fish Expo banquet reservations.

The Information Center will also house the message desk, and messages will be provided to show visitors and exhibitors on five television monitors located around the show.

Fish Expo will close with two popular events. On Friday, October 28, the Fish Expo Banquet will take place at the Westin Hotel.

Seattle's top seafood restaurants and the executive chef of the Westin are working together to put on a banquet that will be an expression of the best seafood city in the country. On Saturday, October 29 the Trawl Crawl will be held. This five-mile fun run attracted over 1,000 runners in 1981.

It begins and finishes at Fishermen's Terminal in Seattle. 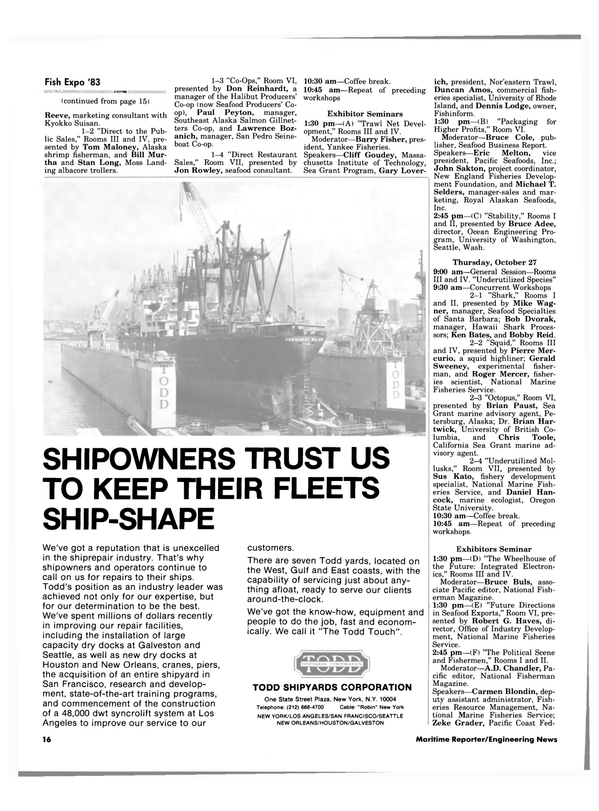