One of the most unique heavylift carriers in the world was delivered recently to Wijsmuller, the Dutch towage, salvage and transportation group, by Oshima Shipbuilding Co. Ltd., Nagasaki, Japan.

The ship, Mighty Servant 1, was named by Mrs. Mary A.

Tappmeyer, wife of Ron A.

After sea trials and commissioning, the Mighty Servant 1 left for France to pick up her first cargo.

At Dunkirk she will load the rig Glomar Labrador for transport to Sable Island, near Nova Scotia.

This rig, built by C.F.E.M. for Global Marine Drilling Co., Houston, is one of the largest jackups in the world.

The rig will be loaded with its total leg length of 494 feet installed.

Mighty Servant 1 will be positioned under the rig when it is standing on its legs. The platform will then be jacked down onto the carrier's deck when the legs will be raised again.

One of the main characteristics is a special underwater hull form, giving it the capability of carrying either light and fragile cargoes (such as modular equipment) or heavy and bulky cargoes under the most favorable trim condition.

When carrying light cargoes, the vessel is immersed to one waterline having an underwater hull form that is slender. Stability is then provided by the wings, which also provide a large deck-space.

When transporting heavy cargoes the vessel is immersed to a second waterline which increases the waterplane area, providing the required stability for transportation of this cargo type.

Other features include a lower cargo hold to accommodate additional cargo or equipment, a 250- ton capacity crane, and detachable buoyance casings aft, so that cargoes longer and wider than the carrier herself can be loaded.

Wijsmuller started its transportation activities in 1976 when it introduced two auxiliary-powered semisubmersible barges, the Ocean Servant class. These were the first barges which could be submerged horizontally. They have been employed successfully for long-haul transportation of very heavy loads such as rigs, dredging equipment, cranes, etc.

For further information on these vessels, Write 56 on Reader Service Card 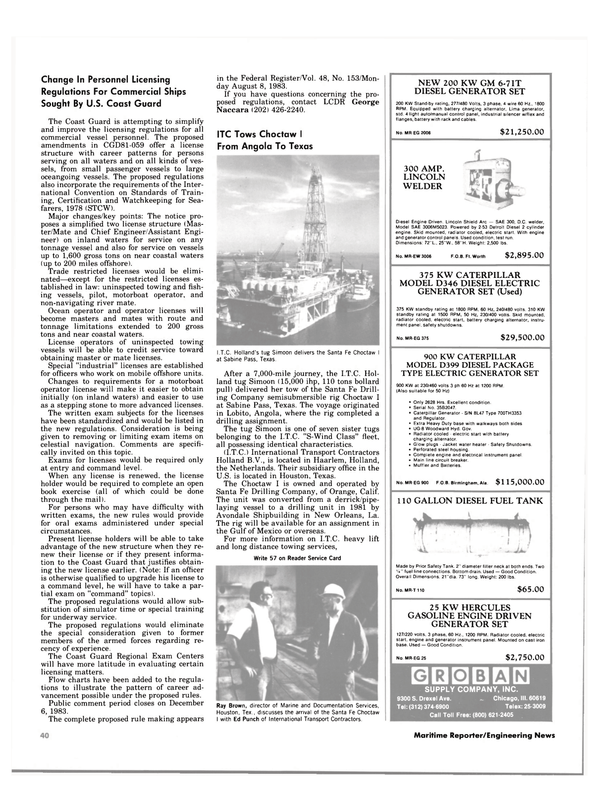