Art Engel, president of Southwest Marine and Roger Hedgecock, mayor of San Diego, rode the new dock into the harbor to mark the special occasion.

The computer-operated, self maneuvering, land transfer dry dock is part of Southwest Marine's $35- million renovation program. The modernized facilities will exceed all Navy requirements and allow Southwest Marine to effectively and efficiently service all types of commercial and naval vessels.

In December 1982, Southwest Marine formulated final plans for the modernized facilities. A 22,000 ton capacity dry dock which included many innovative design specifications was ordered from Kawasaki Heavy Industries. The "Pride of San Diego" is capable of transferring 10,000 ton (destroyer cruiser) ships from dock to shore platforms using a new method of dry transfer. Another unique feature is its ability to transfer ships with its computerized system, regardless of tide changes.

The "Pride of San Diego" is outfitted with remote control articulating dock arms, which, in most cases, will reduce the need for staging normally required for hull preservations.

The "Pride of San Diego" is an example of what a management team with foresight can create with the new technological capabilities available today.

As part of the plan for moderni- zation, a new 700 foot by 60 foot pier was built to service ships in water with drafts up to 35 feet. A new 65-ton gantry crane was designed and built for ships alongside the pier and in the dry docks.

The next stage of the project will include construction of a second large pier, and the construction and outfitting of a new shop production building. The new shop, which will increase the facility space by 30 percent, will be located between the two shore transfer platforms that are soon to be built. The location of the shop will aid in productivity, keeping repairs on time and under budget.

At the completion of the modernization project Southwest Marine will provide San Diego with the finest and most capable ship repair firm on the West Coast, as well as create 1,500 new jobs. 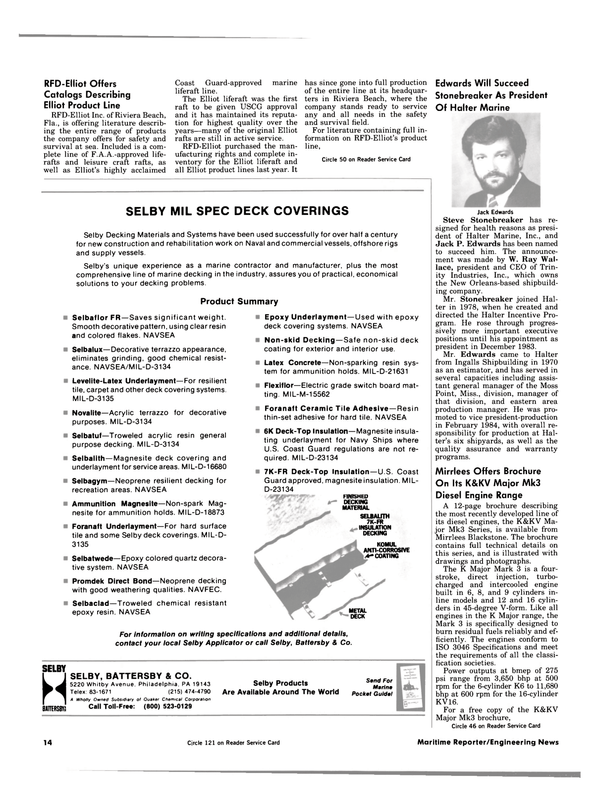