The liquefied gas carrier Sultan Mahmud Badaruddin II was delivered recently by Jos. L. Meyer GmbH & Company in Papenburg, West Germany, to P.T. Pupuk Sriwidjaja (Pusri) of Indonesia. Pusri is a state-owned fertilizer manufacturer and distributor, with responsibility for distribution of all fertilizer and fertilizer-related products in Indonesia.

The vessel is the first semi-refrigerated liquefied gas carrier in Indonesia and in Pusri's fleet of modern self-unloading urea carriers.

It is designed to transport ammonia from a new ammonia urea production facility in Kalimantan on the island of Borneo to domestic and foreign ports in Southeast Asia.

Cargo is carried in three independent bi-lobe tanks at a temperature of — 48 C and pressure up to 4.5 bar. It is capable of transporting ammonia, propane, butane, butadiene, propylene, and vinyl chloride monomer. Cargo is cooled by a reliquefaction plant that includes two Sulzer compressors. Six deepwell pumps discharge cargo at a combined rate of 540 cubic meters per hour.

The vessel has a dual classification, with Lloyd's Register of Shipping and Biro Klasifikasi Indonesia as a Type IIC Liquefied Gas Carrier, and is provided with an IMO certificate according to the Gas Code, Resolution A328(1X).

Marine Consultants & Designers, Inc. of Cleveland, designers of Pusri's self-unloading urea carriers, provided a transportation study to define the ammonia carrier's requirements and speed, prepared the design and specifications for tendering and contract documents, and represented Pusri during tendering, contract negotiations, and construction, providing both plan review and construction supervision. Marine Consultants & Designers was assisted in these tasks by Intership Services, Inc. of Waltham, Mass., who provided design and consultation for the liquefied gas aspects of the project.

New Superliner For Home Lines Against strong European competition, Meyer Werft has succeeded in getting a contract for construction of a 1,260-passenger cruise ship. The big vessel—she will be 670 feet long overall with a beam of 95 feet—was ordered by Home Lines Inc. of Panama, a company that has been active in the cruise business for a long time.

The liner is designed to operate in the Caribbean or worldwide.

Passengers will be carried in 550 cabins. Two diesel engines, each with an output of 15,820 bhp, will give the vessel a service speed of 22.5 knots 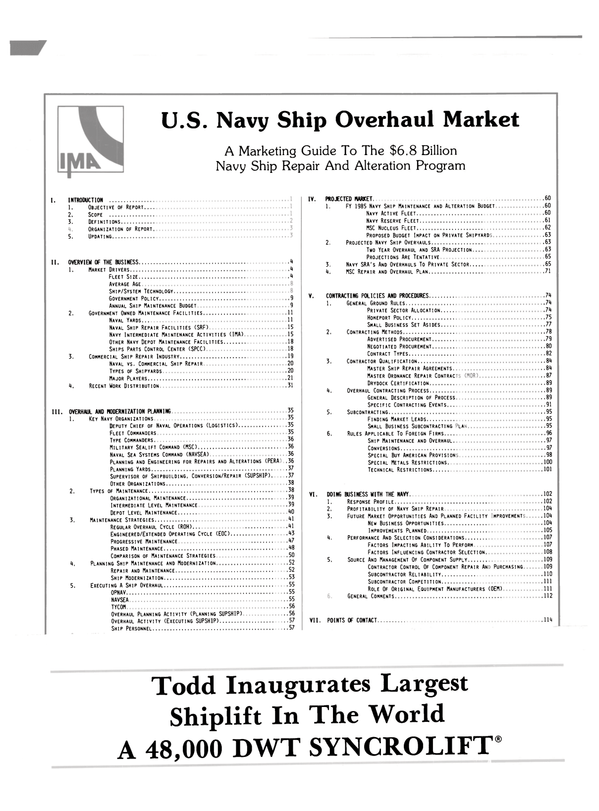