The handbook has long been in demand for its informative, easy-toread maps that show, in addition to the ship channels, the location of docks, berths, terminals, warehouses, fireboat stations, bridges, ferry crossings, shipyards, etc.

The Bay-Houston Towing Co. has been in the water transportation and towing business along the Texas Coast for more than 100 years. The "Port Reference Handbook" traces the history of the company from 1877, when a young man named William Douglas Haden went to work as a cabin boy on the schooner " M e r m a i d . " Captain Haden founded the company, which prospered and expanded over the years.

Today, the Haden family still operates the towing company—Captain W.D. Haden's son, C.R. Haden, and grandson, W.D. Haden II, devote themselves to upholding the tradi- tion of pride and performance in the towing, docking and off-docking ser vices offered by the company, draw ing on the "get-it-done" heritage of Captain W.D. Haden. "Our log books are a history of the Gulf ports," the text states. "If it floats, we've probably pushed it or pulled it." The history of the company is fol- lowed in the publication by a num- bered map of Houston showing, along with other important points of interest, the exact location of the home office of Bay-Houston Towing Company. This is followed by maps of the previously mentioned ports, printed in blue and black on white.

The type is in large letters, and this uncluttered simplicity makes the handy maps easy to follow and extremely useful.

In addition, the booklet contains a Hurricane Map, as well as a table listing the approximate distances between Gulf ports. Houston Ship Channel distances are also included.

For a free copy of the new edition of the "Port Reference Handbook" from Bay-Houston Towing, Circle 92 on Reader Service Card 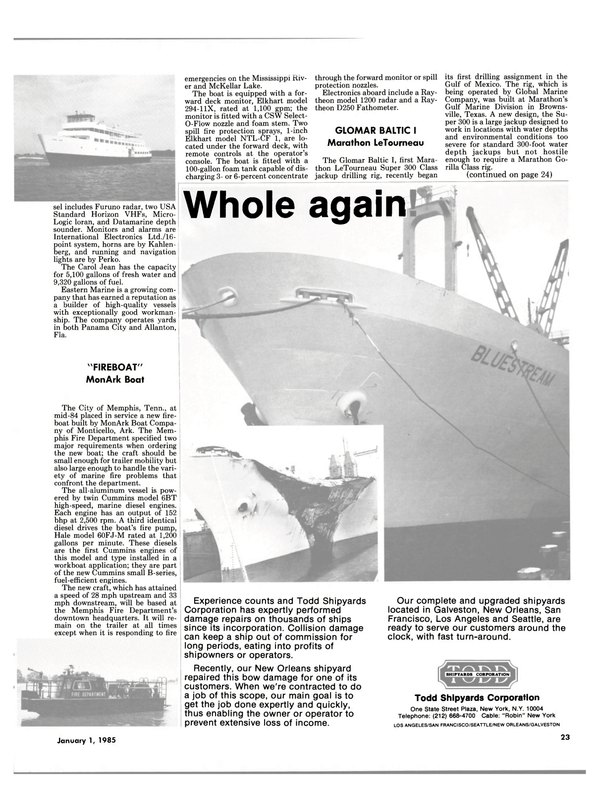