Fincantieri-Cantieri Navali Italiani SpA in Italy has completed major conversion work on the rollon/ roll-off containerships Amaranth Jolly and Grey Jolly owned by Ignazio Messina. Without increasing the main dimensions, the cargo capacity of each ship was almost doubled—from 500 to 976 TEUs.

The ships, built in Japan, had void areas under the hangar deck that were converted to cargo holds.

A fixed approach ramp from the hangar deck to the hold deck (double bottom top) was installed, along with a hydraulic door. A longer and wider ramp betweent he hangar deck and the upper deck was placed atop the existing one. Access to the middle deck was provided by a movable ramp.

Watertight bulkheads in the holds were removed and replaced with supports, and beams and new floors were arranged inside the double bottom. Beams, supports, and pillars were fitted under the upper deck.

A new lighting system and fire detector were installed in the lower hold, as well as a C0.2 system in the same area. An existing elevator going from the hangar deck to the upper deck was removed and the decks were closed off using prefabricated panels. A watertight bulkhead was fitted in the steering gear room to accommodate the increased draft.

Trestles for the loading of containers were installed on the upper deck, and various other modifications were made to air vents, pipelines, fender supports, accommodation ladders, etc.

For more information on Fincantieri's facilities and services, Circle 10 on Reader Service Card 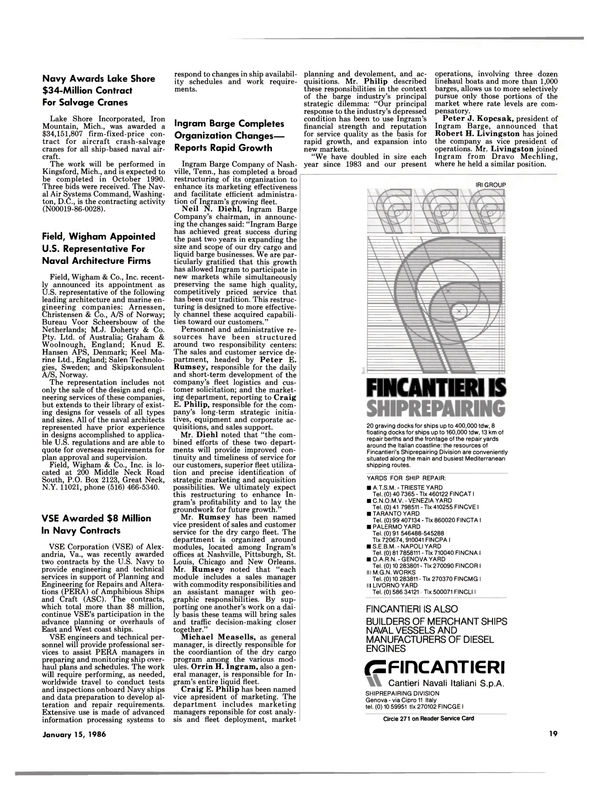