The majority of steam-driven ships now in service were built in an era of low fuel oil prices, with their steam plants designed at or near maximum performance ratings. In those bygone days, operating a ship at lower horsepower was not a practical consideration. However, with the escalation of fuel oil prices during the past decade or so, the need exists for slower steaming to reduce fuel consumption as much as possible.

Derating of the boiler feed pump is a major, positive step in this direction.

The boiler feed pump is totally amenable to efficiency improvement through derating, and relatively easy to achieve (Figure 1). As about 90 percent of all steam-driven tankers and containerships employ either DEB-16 or DEB-22 Coffin® feed pumps, it is a simple matter for the installer to obtain the needed parts from the original equipment manufacturer, either directly or through a marine agent. The marine agent could also provide whatever field service that may be needed.

The less steam it takes to run the boiler feed pump, the less fuel is burned. Using a standard two-stage DEB-16 turbo pump operating at 532 hp, even a 10-percent saving effected through derating would be the equivalent of not having to run a 50-hp motor. All that the service specialist or the ship's engineer needs to know are the flow and pressure readings to begin the derating process. If, for example, the present pump steam flow is 900 gallons per minute, and 500 gpm is calculated to be an efficient level, the conversion might entail a new impeller, diffuser, diaphragm, or perhaps all of these parts.

Whenever a reduction in vessel speed is indicated, the steam plant and feed pumps operate at a lower capacity, and generally at lower efficiency.

The reduction is such that exhaust steam from the feed pump normally returned to the deaerator tank goes back to the condenser and is wasted. The amount of water a feed pump must deliver to the boiler is an approximate function of the ship's speed (Figure 2). If, for example, a 35,000-shp VLCC requires some 160 cubic meters per hour of feed water to reach a speed of 16 knots, it would take approximately 60 m3/h of feed water to attain speeds of between 10 and 11 knots.

Consequently, this capacity reduction could be even greater if derating is initiated.

It is possible to set up a curve (Figure 3) to show how effective derating can be when comparing a derated pump with an existing pump.

These curves correspond to just two of a variety of possible internal configurations that can be fitted to either the DEB-16 or DEB-22 pumps to obtain a specific performance characteristic. Such characteristics are only approximate, and are intended to show the relationship between water flow and steam consumption.

However, they also demonstrate how boiler feed pump efficiency can be improved to meet slower steaming conditions.

In terms of dollar outlay, in a typical situation where a shipowner or operator has a VLCC or ULCC fitted with a 35,000-shp power plant, operating at a reduced speed under 12 knots, a modified boiler feed pump can net an annual saving of between 0.25 and 1.0 percent in the fuel rate.

The payback period for this type of suggested modification averages about 18 months, based upon a formula calling for an assumed fuel cost of $175 per ton. In reality, the exact value of an efficiency gain depends on the type of steam cycle, and should be evaluated for each situation.

Reducing horsepower from 35,000 to 15,000 shp, the corresponding feed pump capacity of 60 m'5/h achieved would permit a saving of about 1,200 kg/h of steam—some 228 tons annually. The saving could be more or less, depending on the type steam cycle and the original internal combination fitted in the pump.

If a standard turbo boiler feed pump is being used, very likely the modification would involve replacing the impeller/diffuser combination with the associated wearing parts. These replacement parts would differ from the original equipment in that the flow passages would be designed to achieve low flows with higher efficiency.

In a situation where the derating work calls for a major reduction in performance, the discharge head and associated diaphragm would undoubtedly need to be changed.

Still, it would not be necessary to disconnect any of the piping to make external changes.

Whatever the modifications, the internals must maintain the highest optimum turbine speed for best results.

One or both nozzle plates in the turbine should be replaced and, therefore, the most energy can be extracted for the available steam.

It is entirely feasible to perform all derating modifications within a day or two. The changes are also reversible; if a return to full steam capacity is desired at some point, the original parts can easily be retrieved from on-board storage. They can also be retained for emergency use and as replacement equipment.

Marine agents are available on short notice to handle derating conversions throughout the world.

Recirculation management is another means of effecting savings. To aid preventive maintenance, the recirculation system should be checked routinely for the following: system opened too early, system that is always open, leaking valves, and oversized orifices (caused by wear or excessive sizing in the original design).

Over the years, the boiler feed pump aboard ship has been a reliable performer. Even so, fuel oil prices are likely to remain high for some time to come, so any means at hand to improve the efficiency of fuel-consuming systems is a plus. By derating boiler feed pumps, shipowners and operators have an exceptional opportunity to boost efficiency, save on fuel, and reduce costly maintenance. 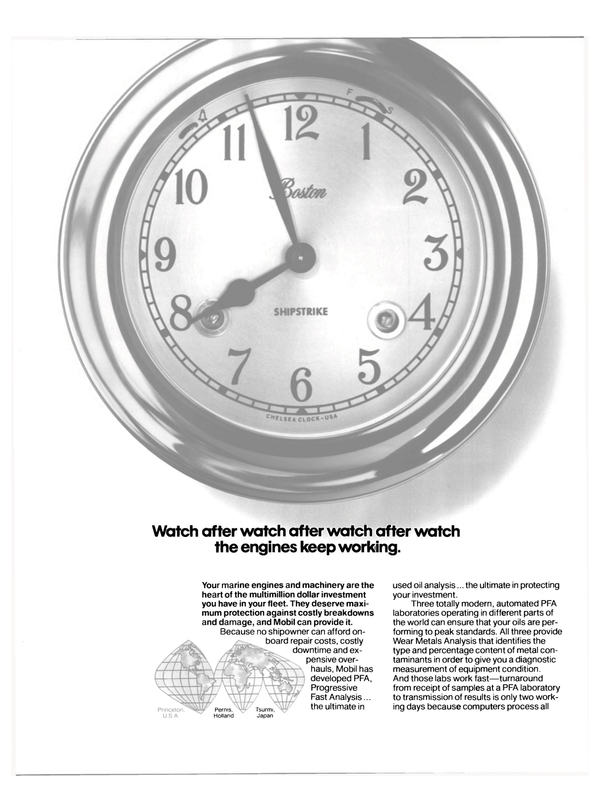