—Literature Offered The Detroit Diesel Allison Division of General Motors has announced a significant expansion of its product line by virtue of marketing agreement with Deere & Company, and has moved to streamline and tighten its manufacturing operations in North America.

"With these moves, DDA is making clear that it intends to be one of the top diesel engine producers in the world," said Ludvik F. Koci, DDA general manager and GM vice president.

To that end, DDA's marketing agreement with Deere & Company gives it s significantly broader base in the lower horsepower ranges. It will distribute John Deere engines ranging in horsepower from 50 to 250.

"In the past, these engines have been used mainly in off-highway, industrial and agricultural applications," Mr. Koci said.

The Deere engines in the 50- to 250-hp class will be designated as Detroit Diesel Series 30 and 40, which include 13 individual engines to fit a wide variety of applications.

And with the integration of the John Deere Engine Distributor Group—per the marketing agreement— DDA has assumed responsibility for marketing the line and providing parts and service through its worldwide distributor network.

The availability of the Deer engines has also expanded DDA's die- sel/electric generator set line. Slated for a variety of industries requiring portable or stand-by power, the new gensets will range from 35 to 160-kw output.

It marks the first time in nearly 15 years that DDA has offered a completely assembled genset and the line is expected to be expanded to include larger units up to 1,500 kw in the near future. In recent years, the packaging of generator components with Detroit Diesel engines has been done by individual DDA distributors.

It is anticipated that the Series 30 and 40 diesels will also fit into DDA's own extensive and highly favored line of marine engines for both commercial and pleasure boat application. John Deere engines have been used in marine applications in the past and have acquired an excellent reputation for fuel efficiency, reliability and durability.

DDA now has set its sights on expanding the sale of John Deerebased marine models which augment the present Detroit Diesel marine line.

The consolidation is planned to include the modernization of DDA's Redford, Mich, facility and the relocation of the division's parts machining and 8.2L medium-duty diesel operations from its current location in Romulus, Mich.

"As the consolidation gains momentum," Mr. Koci observed, "it will trigger other changes in our manufacturing operations, ranging from where and how we purchase our materials and components, to how we apply the most up-to-date technology available to the manufacturing process." For free brochures containing complete date on the full line of Detroit Diesel Allicson Division engines, Circle 14 on Reader Service Card 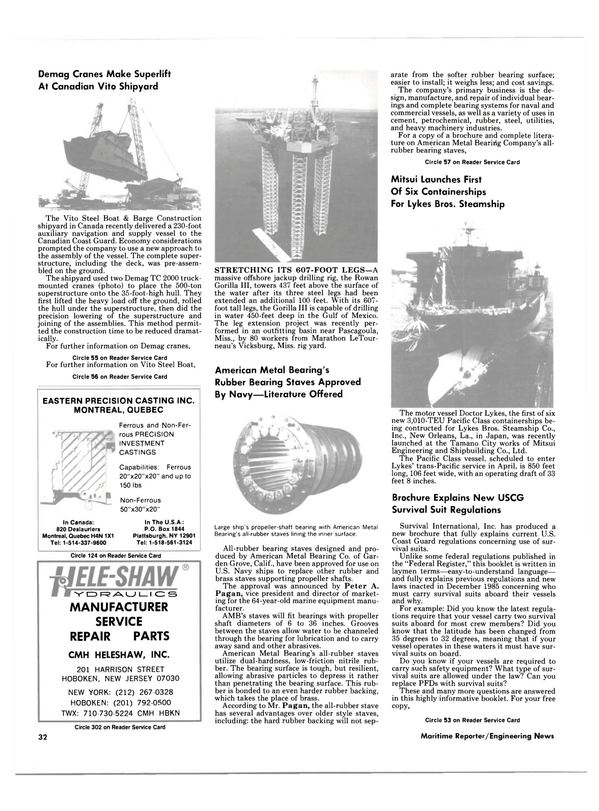