The PNOC Marine Corporation facility at Batangas Bay in the Philippines has experienced dramatic and rapid growth during its short five-year life. It has developed into a modern Lloyds-rated Class A shipbuilding and repair complex.

Strategically located on a 50-hectare site at San Miguel, Bauan, Batangas, PNOC successfully competes for business with the world's leading yards. In large measure, its position in the industry is based on an economical, tradition-breaking approach to yard outfitting which allows the yard to offer competitive prices for construction and repair work.

PNOC Marine Corporation (PMC) is a wholly owned subsidiary of the Philippine National Oil Company (PNOC). In 1974, PNOC acquired a shipping transport fleet to secure the movement of petroleum products. A repair and maintenance facility was planned to support the requirements of the fleet. In 1980, the support facility was completed as a fully equipped shipbuilding and repair yard. With its commissioning, the corporation increased the national capacity by nearly 20 percent.

With its 1,000-plus work force, the yard undertakes construction and repair work (up to 23,000 dwt); dockside repairs of vessels with drafts of up to 40 feet; and engineering works and fabrication of components, modules and prefabricated structures. In total, PMC has constructed ten vessels and handled the repair of over 350 tankers, tug boats and barges since 1981.

When designing the facility, PMC consulted with Bardex Hydranautics of Goleta, California for the most cost-effective yard layout possible.

The result has been an integrated facility that allows maximum scheduling flexibility, easily accessible work areas, and utmost utilization of available space. A two-fold savings was realized in the new yard construction: first, in initial installation costs and, then later, in costs associated with ship repair and maintenance.

The centerpiece of the yard is a hydraulic chain jack shiplift elevator and a hydraulic wheeled transfer system (bogie train) designed and supplied by Bardex Hydranautics.

The lift is Lloyds-rated Class A with a maximum net lift capacity of 12,000 long tons. A total of sixty, 250-long-ton, hydraulic chain jacks lift the 28-meter by 172.5-meter platform in safe synchronized steps of one chain pitch at a time. The chain is a predictable tension member in terms of safety and long life.

In designing the shiplift system, Bardex Hydranautics took into account the many classes of ships anticipated at the yard. As a result, the platform can accommodate varied load distributions. The platform is lifted or lowered by a single operator at a variable speed depending on the load.

One of the most important features of the yard is the "pitless" wheeled transfer system that operates in concert with the new shiplift system to service eight repair berths and a new construction/erection area having varying capacities up to 23,000-dwt tons.

The bogie train (which can be divided for smaller ships) rolls under the blocked ship in the platform and is hydraulically jacked up to lift the vessel from the platform blocks.

The train then moves the vessel off the platform onto the land rail system.

During this transfer, the lift cylinders serve a dual purpose, that of lifting and load limiting. If an overload occurs on a bogie due to yard variations, the hydraulic-operated cylinder on that bogie will retract to relieve and redistribute the load to the adjacent bogies, thus preventing damage to the wheels, bearings and vessels.

The hydraulic bogie system saved on the amount of tract and structural steel required and on wheel costs.

Further, the cost of excavating a traditional side transfer area pit was completely avoided.

The Bardex system provides a hydraulic interface between the ship and the yard level and allows a much higher yard level tolerance.

The hydraulic interface can accommodate tolerances of 2-inches. Allowing yard settlements in this range permits the use of crushed rock with ties for load spreading. In areas of settlement above tolerance, added rock can be worked in and under ties to return yard rail to within tolerance. Overall, the company estimates that a traditional transfer system could have cost PMC 70 percent more.

Foot and vehicular traffic can also move safely across the transfer area to any of the adjacent repair berths as well as to the new construction berth.

Another key design element in the lateral transfer scheme makes use of portable longitudinal track that is lifted by the bogie train and carried with the ship on the lateral rails in the transfer area. When the ship has been aligned with the desired berth, the portable track is lowered by the bogie train and becomes the longitudinal track on which the ship is moved into the berth. 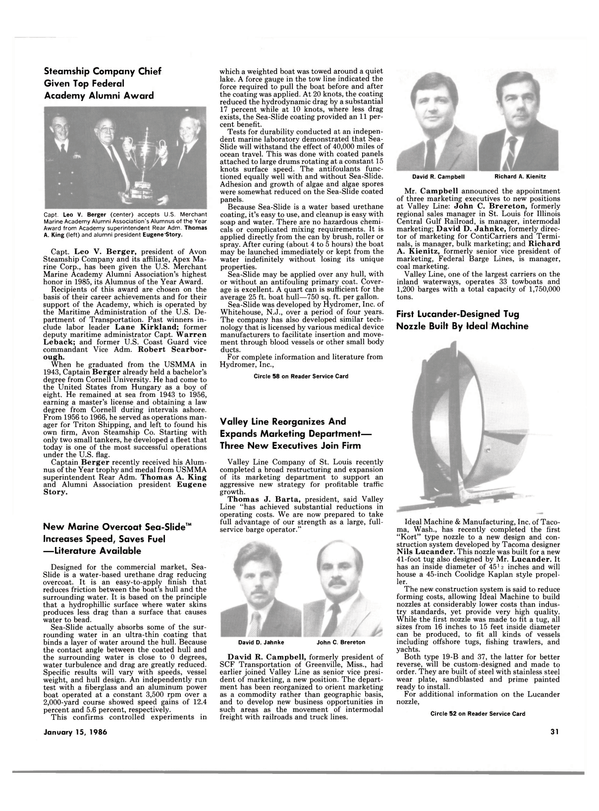