The 50-foot move of a 160-footlong, 200-ton glass fiber reinforced polyester (GRP) mold is done safely in 3Vi minutes on a film of air at the Mercantile-Beliard N.V. shipbuilding plant in Ostend, Belgium. Each of six mold sections are moved the same way by the yard, which is in the middle of completing a government contract to build 10 new GRP minesweepers — one every six months. Using the air bearing system, savings in labor time and equipment costs are considerable, according to G. Delhasse, technical assistant manager at the new plant.

As minesweepers must be nonmagnetic, GRP hulls were specified, requiring production of a special workshop to meet stringent Belgian military specifications. When the contract was signed, however, a plant for molding large hulls in GRP did not exist in Belgium, so Mercantile- Beliard began almost immediately to build one. One year later the 10,000-square-foot facility was completed, fully air conditioned, and equipped with extensive dust controls to accommodate polyester resin molding production.

Erection of gantry cranes was first considered to handle the heavy mold, but proved to be too costly because of their limited use. Floor rails were also considered and rejected because of the desire for flexibility of movement and an unencumbered floor. Air bearings were finally selected for their limited load-bearing capacity, clean opera- tion, omnidirectional travel, and low cost, according to company officials.

The ship's hull mold is made of 17 parts—four bottom parts, 12 side parts, and a transom flat panel. All are connected by bolted flange and centering pins. When the hull molding is completed and stiff enough to be moved without permanent distortion, the four bottom parts are removed and replaced by seven specially built keel beams. These beams are used with air bearings to raise the ship's hull a few inches out of the mold. This is done by inserting a modular load-handling system of 14 air bearings, designed and manufactured by Aero-Go., Inc. of Seattle, under each end of the seven keel beams and then applying shop air.

In seconds, the air bearings inflate, raising the keel beams and the ship's hull approximately 2 inches out of the mold form. Next, the keel beams are chocked to free the air bearings, allowing the bearings to be removed and used in a similar way to move the six mold parts on one side of the hull. These mold parts are easily pushed across the floor on a film of air and positioned out of the way by two to six workers.

Approximately one pound of force will move 1,000 pounds on the air bearings. An average mold section requires 20 to 30 pounds of total pushing force by the workers to move it. The six female mold parts on the other side of the hull (against a wall) are kept in permanent position by hold-down bolts.

To remove the GRP hull itself, the 14 air bearings are again placed under the keel beams supporting the hull, and the beams are connected by cable to four side winches.

Transport of the 200-ton hull across the floor on air bearings to the next work station 50 feet away is fast, easy, and safe, according to plant manager E. De Winter.

"The entire move is made at the rate of about 14 feet per minute with the side winches pulling, and six men helping guide and at the central control station," says Mr.

De Winter. "When the hull mold arrives at the second work station, it is quickly and accurately aligned again, as GRP is a very flexible material." Re-erection of the mold parts starts immediately by sliding the air bearings under the six mold parts, inflating the bearings, and pushing the mold parts into place so they are precisely positioned to form the next GRP hull. The air bearings are deflated in seconds, removed, and the mold is prepared for producing the next hull.

"The air bearings keep the shop floor free from any obstructions and make it easy to clean," says Mr. De Winter. "In addition to our use of the air bearing system to move heavy and cumbersome mold parts, which require gentle movement and accurate positioning, we use the air bearings to quickly move many other parts and equipment in the plant.

The system is working out quite satisfactorily in our molding operation." When the ships are completed, they will constitute part of a Tripartite Agreement between Belgium, France, and the Netherlands to build up to 40 GRP minesweepers.

These vessels are intended to rejuvenate the mine countermeasure naval capability of each member country.

For additional information and free literature on the Aero-Go air bearings, Circle 96 on Reader Service Card 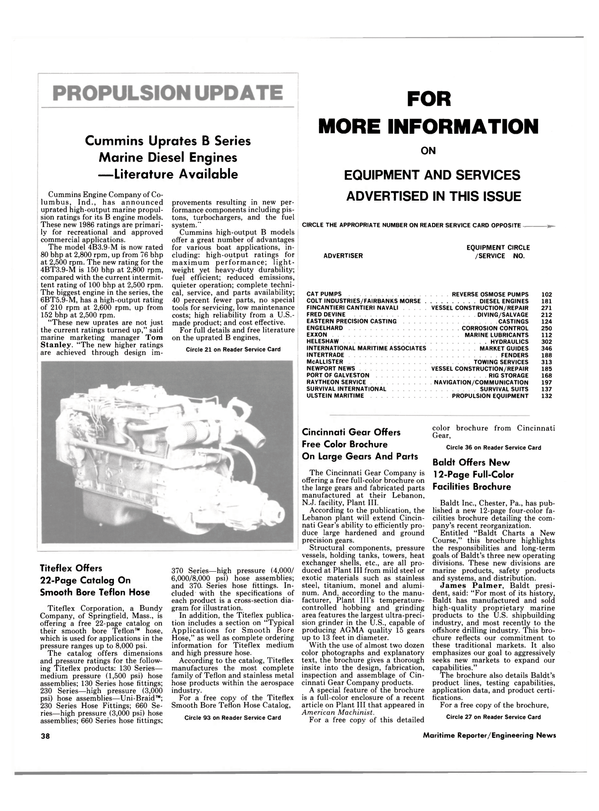