U.S. YARDS OPTIMISTIC ABOUT THEIR FUTURE It had been assumed by many observers that, with the termination of construction subsidies in 1981, American shipyards could not win competitively placed commercial ship orders. But current trends indicate that American yards are beginning to pay attention to the commercial market and to the potential that market has for future orders.

Overview In 1981, the Office of Management and Budget (OMB) began efforts to terminate subsidies to the commercial shipbuilding industry and to freeze existing operating subsidy contracts for U.S.-flag operators.

These actions were undertaken because the Reagan Administration believed that government should not be in the business of market interference. But, this philosophical argument was an ideological overlay for the real argument that OMB was advancing.

First, it was argued that American shipyards were hopelessly noncompetitive.

Some owners/operators complained that a 50-percent subsidy was insufficient to match a subsidized U.S. price with the world's price levels.

Second, OMB believed that there would never be a revitalization of t h e commercial shipbuilding market, either in the U.S. or abroad, because speculative demand in the 1970s would lead to severe overtonnaging for decades. OMB argued that since shipbuilding capacity was outstripping demand, the United States as a high-cost producer, should reduce excess capacity.

Third, internal OMB papers made it clear that it was cheaper for the U.S. Government to allow U.Sflag operators to take advantage of foreign subsidy practices, rather than try to compete with those foreign governments in a subsidy war.

Since the 1981 termination decision, American shipbuilders have seen their commercial market collapse.

The irony is that this decline has come in the face of the greatest peacetime naval construction buildup in our history.

Current Period The termination of construction subsidies drew American shipyards into the military shipbuilding and repair markets. Throughout the 1980s, there was a continuous growth in the share of workload dedicated to Naval contracts as opposed to commercial contracts. In 1990, it is expected that more than 90 percent of the industry's workload will be performed for the U.S.

And, although some observers believed that the Jones Act would be a basis for commercial market development, it has not. In fact, since 1984, only eight oceangoing Jones Act vessels have been ordered.

In addition, no U.S.-flag operator engaged in the foreign trade has ordered tonnage in the United States since 1981.

So, American shipyards are faced with virtually no commercial orders and a Navy market that is forecast to decline by 30 percent.

Key Events And, yet, in this environment, four recent developments give rise to some hope for American shipyards.

First, despite a slight dropoff in the third quarter 1990 data, the international shipbuilding community has its largest backlog in 13 years. This boom comes in an international market where shipbuilding capacity has been cut back by about one-third in the last 10 years.

Second, the Shipbuilders Council campaign to end foreign shipbuilding subsidies practices (through negotiations at the Organization for Economic Cooperation and Development) is beginning to have some effect, with some of the most blatant of subsidy practices being restrained.

Third, with the growth in worldwide demand, the tightening of shipbuilding capacity, decline in Navy work and the scrutiny of foreign government subsidy practices, American shipyards are becoming more interested in the commercial market. In fact, the Navy argues that to maintain the size of the current industry throughout the 1990s will require about 30 new commercial ships to be ordered each year.

The level of commercial ship repair work in U.S. shipyards has increased, and there is a growing number of reports hinting at discussions between owners and yards about potential projects.

Fourth, recent competitions between American and foreign shipyards indicate that U.S. yards are closing the gap in some market niches. Southwest Marine's $75-million conversion contract with Royal Caribbean Cruise Lines to double the cabin capacity on the Viking Serenade is the first major commercial export order in 30 years. Avondale has been awarded a contract to do a contract design and production proposal for the Phoenix World City project. Avondale's initial price estimate for this 5,600-passenger cruise ship newbuilding project was onethird lower than that of the European competition. Finally, Trinity Marine-Halter's bid on the British Columbia ferry project was the lowest (when Canadian tariffs were factored in) of all international bidders including Mitsui of Japan, Masa Yards of Finland, and Brodosplit of Yugoslavia. In any event, the highest bidding Canadian shipyard was given the contract, thereby making a mockery of Canadian adherence to the Free Trade Agreement. But, the point is, the American yard was the low bidder.

The Council believed two years ago that in a nonsubsidized market, there were market niches in which U.S. yards could be immediately competitive. Thus, the first baseline requirement was to discipline foreign subsidy practices.

U.S. shipyards have seen the cost of the factors of production stabilize or decrease in the U. S., while world pricing levels are beginning to approach something closer to true production costs. In fact, Japanese sources continue to say that VLCC prices need to go up by another 20 to 25 percent to return Japanese yards to profitability.

Despite recent press comments, U.S. costs are no longer twice as high as the rest of the world. Labor rates in the U.S. now rank eighth in the world. For example, Germany's rate is $6/hour higher, while Japan is approaching $2/hour higher than comparable U.S. wage rates (about $14.50/hour, including benefits).

There is considerable debate about the cost of material, since it is likely that with the constraints on the international market in the supply of marine equipment, there will be price increases as demand accelerates.

In addition, some foreign yards tell us that the cost of U.S.

Coast Guard-approved systems adds 15 to 20 percent to the cost.

The Coast Guard denies this, but this is an area where further investigation is warranted.

Despite the debate over production and material costs, it is clear that the competitiveness of U.S.

yards in complex, high-outfit ships is improving. We should be costcompetitive when it comes to the export of military vessels as well.

But, saying this does not ignore the necessity with moving ahead with analysis and product development of new ship designs where series production has its learning curve pay-offs. This includes innovative double-hull tankers and selfunloading bulkers, where there is already some initial work being done in U.S. yards.

The Future For American Shipyards Given nonsubsidized market niches, the answer is yes, American shipyards can build high-outfit ships at competitive prices. But, we cannot simply be satisfied with a single market niche. A single market niche is a prescription for downstream market maintenance problems.

The world shipbuilding market goes to that industry capable of responding to standardized demand. And, in meeting that potential demand, a transitional effort will need to be undertaken—such as the Sealift program and meeting double-hull tanker requirements— where we can bring investment, training, and product development to bear on the larger market issues facing us. This transitional period of about three-to-five years will give us time to structure innovative and creative ship finance mechanisms and help us move out of the Navy and high-outfit, complex market niches into the mainstream commercial shipbuilding market.

There is a future for American shipyards in the post-Cold War period and that future lies in the commercial shipbuilding market. Further, it is that unthinkable of unthinkables, where the potential for growth and success lies—the international market—that the real future of American shipbuilding can be seen. 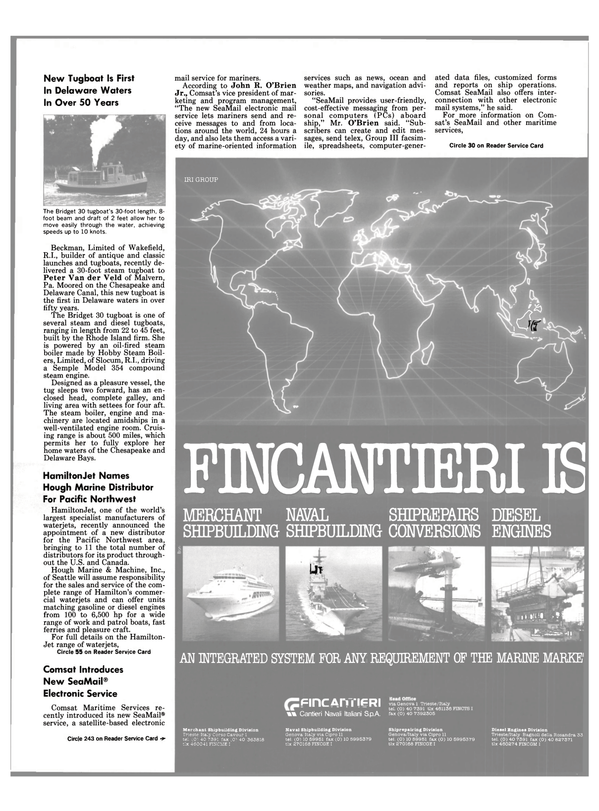