Supplemental Funding Package Likely The projected cost for U.S. naval operations related to Operation Desert Shield through September 30 has more than doubled—from $230-million to $490-million —according to figures released by the Pentagon recently. Pentagon officials attributed the increase to various factors, including a $10-per-barrel increase in the price of oil, increased operating tempo for ship steaming and aircraft flight operations and additional personnel costs required by the call-up of Reserve units. The skyrocketing costs of U.S.

operations in the Persian Gulf region has increased the likelihood t h a t Congress will be asked to approve a supplemental appropriations bill soon after it reconvenes.

The combination of increased ship steaming and aircraft flight operations will add $175- million to the overall bill for Desert Shield, the Pentagon says. Deployed ships usually only steam for 51 days per quarter but, those ships currently deployed as part of the "intercept" effort—designed to enforce U.N. mandated sanctions against Iraq—are expected to increase steaming to 90 days per quarter, a 76% increase.

Navy involvement in the deployment of other U.S. forces is also increasing Service costs.

The eight SL-7 class Fast Sealift ships being used to transport equipment to Saudi Arabia have cost $34-million to activate, crew, equip and deploy. The activation and operation of 16 Roll-On Roll-Off ships from the ready reserve fleet has cost an additional $95-million. A further $9-million in added costs has resulted from the activation and deployment of two Navy prepositioned ships required mainly for aviation logistics support.

The skyrocketing costs of Desert Shield and the looming end of the fiscal year will most likely cause the President to seek a supplemental funding package, Pentagon officials say. The DOD will have three options to fund operation in the Persian Gulf. These include seeking a supplemental appropriation; reprogramming funds between existing programs and soliciting contributions from foreign nations.

Pentagon spokesman Pete Williams said there "is some cost sharing going on" but declined to specify what countries were giving and how much they have contributed. Mr.

Williams also noted t h a t it would be possible for the President to utilize a little known law, the so-called "Feed and Forage Act" of 1861 that would allow DOD to "spend now and send Congress the bill later." This act has been used by DOD seven times since 1963, often due to late appropriations, he said.

Mr. Williams also noted that naval forces of other nations are actively participating in the U.S. organized blockade of Iraqi and other regional ports. However, while U.S. ships have boarded several vessels to examine cargo and determine destination, Mr. Williams said he was unaware of any boardings undertaken by foreign naval vessels. The multinational naval force now in the Gulf or on its way to the region represents the largest such flotilla in recent history. The Pentagon estimated the cost of the Desert Shield operation in Saudi Arabia to be $2.5-billion through the end of the fiscal year. In early August the cost was estimated at $1.8-billion. The cost includes support for ground troops, reserve call-up and deployment of three aircraft carrier battle groups to the area. 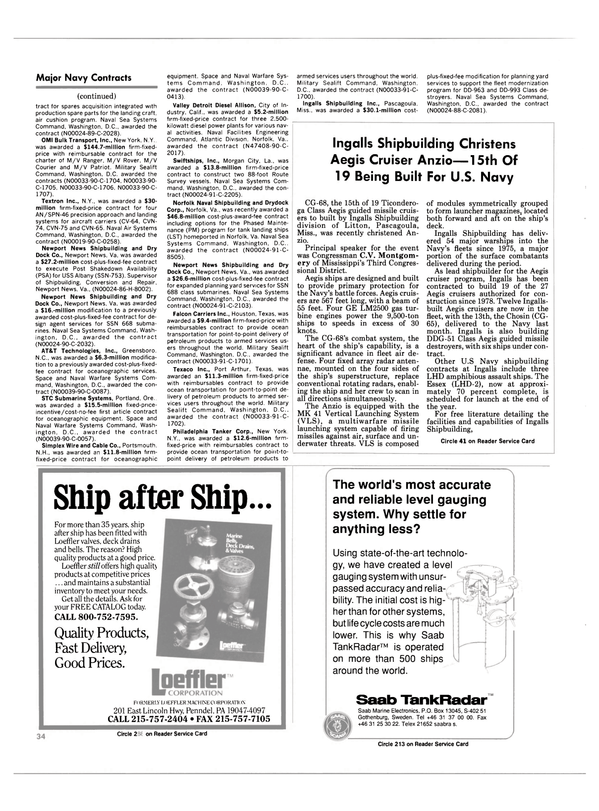