The rebuilding of the U.S. petroleum carrying fleet to OPA 90 standards continues, as Bollinger Gretna, Harvey, La., and K-Sea Transportation Corp. of New York have signed a contract for the construction of four double hull, ocean service, OPA '90 oil barges. The barges will have capacities of 80,000 to 100,000 barrels. Terms were not disclosed. The barges will be built primarily for oil service on the Northeast U. S. coast. They will be coupled with existing K-Sea tugs using a connection system designed and delivered by Acomarin Engineering.

Walter Berry, executive vice-president and COO of Bollinger said. "K-Sea has been a valued customer for service, repairs and regulatory inspections. This is our first opportunity to demonstrate to them why Bollinger is also a leader in construction of double hull barges and other vessels. We are also pleased to announce the return of new construction work at Bollinger-Gretna as Kenneth Boothe, Sr., its general manager, and his shipbuilders have built numerous large double hull barges and many other barges and boats in the yard's long history." Formerly known as Gretna Machine & Iron Works, a multi-use construction and repair/conversion shipyard, its previous owner had dedicated the 66 yearold facility exclusively to repair and conversion work in October 1997. Modules for all four barges will be fabricated at Bollinger Marine Fabricators Amelia, La and shipped to Bollinger- Gretna where they will be joined to other components produced at Bollinger-Gretna, where final assembly and installation of piping and other systems will be completed. Delivery of the first barge is planned for summer of 2002. with delivery of the remaining three barges scheduled at regular intervals. 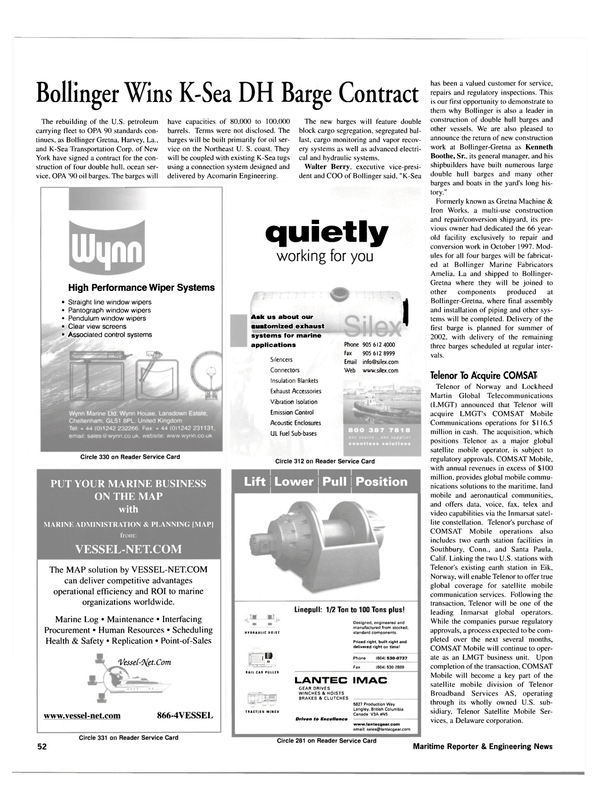