Maritime veteran Captain Luther Blount has done it again in terms of firsts in the maritime industry — the 84- year-old founder of American Canadian Caribbean Line (ACCL) has named his daughter, Nancy Blount as president of the small ship cruise line.

Captain Blount, the founder and president of the line, which is headquartered in Warren. R.I., has retired as president of ACCL. While he will still hold the title of the line's chairman, Nancy will assume duties as president — making her one of the few women to hold such a post in the cruise industry.

"We have had a succession in place for some time." Captain Blount said. "Over the years, Nancy has been assuming more responsibility in the operations of our cruise line. In the past year, she has increased company sales by 20 percent — making the year 2000 the best in our 35-year history." Prior to her current position, Ms.

Blount was corporate vice president and director of operations, a position that she assumed in 1979. Since then she has developed corporate policies and procedures, annual cruise schedules and itineraries, as well as administering personnel and operations of the company. Ms.

Blount was also part of the management team, which oversaw company expansion from one to three vessels and the extension of itineraries into South America and the Caribbean.

"This cruise line has been part of my life for as long as I can remember," said Ms. Blount, who began her career with the company in 1966 holding a variety of positions from deck hand to shipyard welder for Blount Marine. "My goal is to ensure that my father's vision remain at the core of the company." 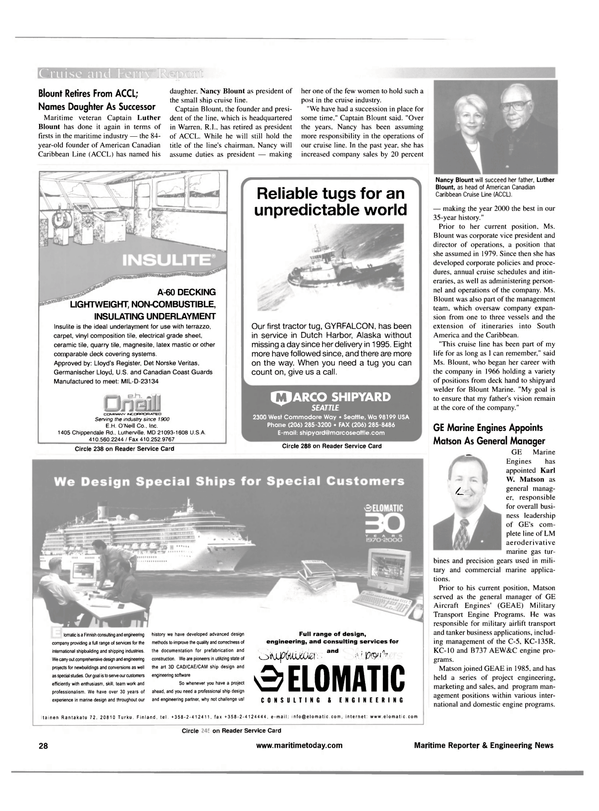