Prevention and control of fire aboard ships present a number of unique problems.

Special attention must be paid to fire safety, and in particular to evacuation procedures from enclosed areas that can fill quickly with the toxic fumes generated by fire. A number of cruise lines are addressing this situation by providing their crews with a type of fire safety device that protects against these potentially lethal gases.

Royal Caribbean Cruises Ltd. has joined several other major companies in the cruise industry with the decision to equip its fleet of cruise ships with EVAC-U8 Emergency Escape Smoke Hoods. These fire-safety products protect against smoke inhalation in the event of a shipboard fire.

Royal Caribbean is the most recent cruise line to install this potentially lifesaving technology, but it is certainly not the first. In the spring of 1999, Princess Cruise Lines deployed between 300 and 700 EVAC-U8 smoke hoods on each of the nine ships in its fleet, also for crew safety in the event of a fire emergency.

Disney Cruise Lines has recently purchased EVAC-U8s for its ships as well.

Considered by many fire-safety experts to be the world's most advanced smoke hood, the EVAC-U8 is a state-of the-art respiratory protection device that provides up to 20 minutes of breathable air in a toxic environment. About the size and shape of a beverage can, EVAC-U8 combines a state-of-the-art catalytic filter with a heat and flameresistant hood that protects the user's head and eyes from smoke, heat and flame. This development follows a recent International Maritime Organization (IMO) recommendation that Emergency Escape Breathing Devices, or EEBDs, be installed in the engine rooms of marine vessels. In a document drafted by the IMO's Maritime Safety Committee, guidelines were established regarding "location, use and care of emergency escape breathing devices, to provide personnel breathing protection against a hazardous atmosphere while escaping to an area of safety." Circle 6 7 on Reader Service Card 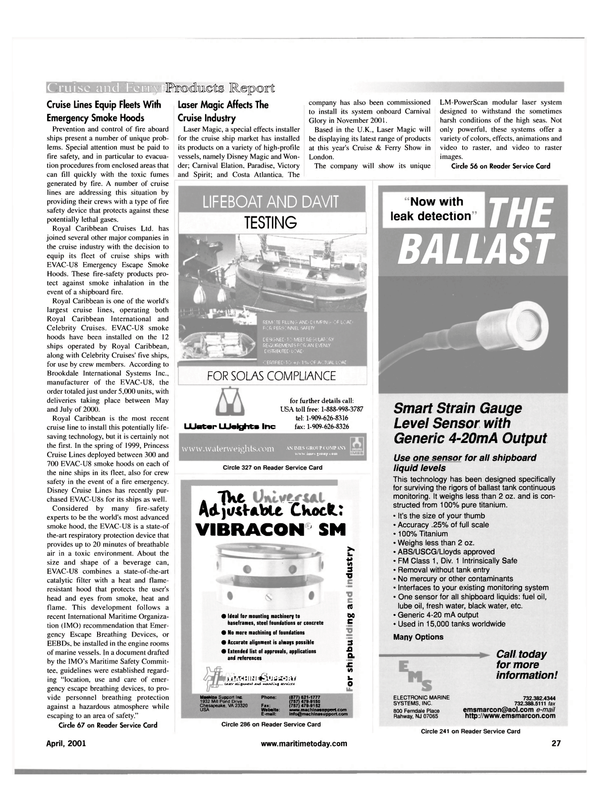