Despite reports earlier that the company was headed for bankruptcy protection, Friede Goldman Halter announced that it and several of its affiliates have signed a letter of intent with Pegasus Partners II and affiliated entities for Pegasus to loan $100 million in the form of a senior secured note with a threeyear maturity. In connection with the proposed transaction, the company will issue Pegasus warrants to purchase the company's common stock. The recommended transaction is subject to the negotiation and execution of a definitive agreement and the satisfactory completion of due diligence by Pegasus.

Shares of Friede Goldman Halter Inc., fell on April 3 after the company said it may have to seek bankruptcy protection.

Friede Goldman, whose problems stem from cost overruns on a number of oil rigs it is building, said it plans to reschedule the call. Shares fell $1.52 to $0.90 cents on the New York Stock Exchange the day after it disclosed it was carrying $107.7 million in overdue debt.

In an SEC filing, the company said if it can't renegotiate its credit and raise more capital, it may not be able to meet our obligations in the ordinary course of business and it may be necessary for us to seek protection under a petition of bankruptcy.

The company said costs for two rigs it is constructing for closely-held Petrodrill IV and Petrodrill V would run some $121 million more than it expected. 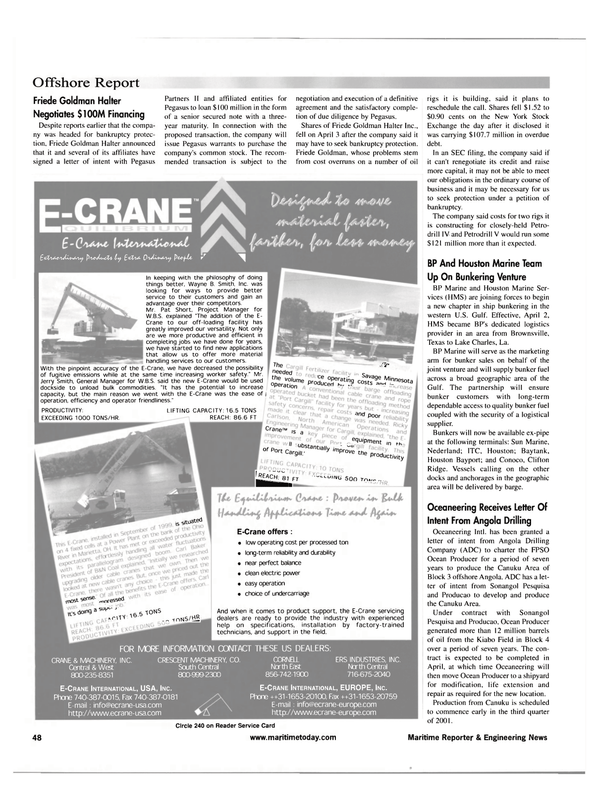