Holding on to its 128-year -dam tradition, Holland America unveiled two new additions to its fleet — tns Zuiderdam and ms Oosterdam — at the Seatrade Cruise Shipping Convention. Measuring 951 ft. (289.8 m) each, the duo, which will mark the beginning of the five-ship Vista Class Series, will be constructed at Fincantieri for delivery in September 2002 (Zuiderdam), and July 2003 (Oosterdam).

Representative of the South and East "Vista " points on the compass, the vessels embody technologic allyadvanced designs that will secure Holland America as a pioneer in the future of cruise ship design.

By Regina P. Ciardiello, Senior Editor At 85,000 tons each, the first two ships of Holland America Line's (HAL) Vista Class series, Zuiderdam and Oosterdam, due for delivery in September 2002 and July 2003, respectively, will serve as the homes for a host of emerging marine technologies, and will surely, raise the quality bar for the entire industry. With ground-breaking technology seemingly remaining at the forefront of the cruise industry, last year could have been dubbed the "year of the gas turbine" when Celebrity Cruise Lines introduced this type of power on its new Millennium class ships.

Never before utilized by the cruise industry, the GE LM2500+ gas turbine received much exposure from these ships, and since then other cruise lines such as Royal Caribbean and Princess have opted to use this power source.

Interestingly, Holland America (HAL) has decided to play the role of innovator (rather than follower) — with its own innovative power package. HAL, which is owned by Carnival Corp., who last year partnered with Finnish engine manufacturer Wartsila for a new smokeless diesel engine, has decided that each of the new ships will feature five Wartsila "Enviroengines," one gas turbine and Azipod propulsion. The Wartsila engine, which debuts on the new Carnival Spirit scheduled to set sail on April 29, has gained even further exposure as the diesel engine component of the power package onboard Cunard's mega ocean liner Queen Mary 2, which will debut in 2003.

Since each of the 1,848 passenger vessels will be operating on seven-day Caribbean and Alaskan cruises, the gas turbine concept will be a valuable asset while the ships are at port during their Alaskan itineraries.

According to HAL's director of newbuildings, Pieter C. Rijkaart, the vessels will operate on five diesel engines as their primary source of power, while the gas turbines will be utilized when the ship is at port, and in environmentally sensitive areas, such as Glacier Bay, Alaska.

Rijkaart, who has been designing the line's newbuilds for 16 years, has designed the Vista Series with two separate engine rooms — something that has never before been implemented on a cruise ship. The model of the new ship series that was unveiled at the Seatrade press conference demonstrated this idea with the presence of two side-by-side funnels placed strategically on the top deck of the ship.

When conceptualizing the new Vista design, Rijkaart envisioned that the new class would be the safest cruise ships afloat — what better way to capture this notion than to design a vessel that can still run on the gas turbine if the diesel engine package shuts down — hence the two engine room concept.

"If there is a fire in the engine room, the ship can still move via one gas turbine at 10 knots," Rijkaart said.

While the two rooms are adjoining, according to Rijkaart, they will operate on two separate electrical switchboards.

Safe Evacuation is Key Another unique feature that HAL ships are known for are their large outside decks. While this is pleasing from a marketing standpoint, it is also beneficial in terms of safety. Since the decks are in fact so large, there is capacity for all passengers to remain outside during evacuation drills — hence no need for muster stations. According to Rijkaart, HAL's evacuation process is detailed and organized — passengers will find their lifeboat assignments located on the back of their stateroom doors. The crew is also given a complete list of occupied staterooms in order to perform a comprehensive roll call during these evacuation drills.

In addition to the standard IMO-required lifeboats and tenders, the Vista ships will also boast a fast rescue boat. Able to accommodate eight persons, the IMOapproved unsinkable vessel is lowered into the water like a conventional lifeboat, except it is designed to move at high speeds for quick aid to passengers.

As a member of the International Council of Cruise Lines (ICCL), HAL has adhered and will abide by a recommendation by the National Transportation Safety Board, (NTSB) to ICCL for locally sounding smoke alarms. As part of ICCL's new mandatory safety and environmental standards, all member-lines will now house smoke alarms that are audible in all passenger and crew staterooms, adjacent corridors and bridge.

Prior to this new standard, cruise ships were only required to have smoke alarms on the bridge — therefore the entire Vista class will employ this new safety measure. 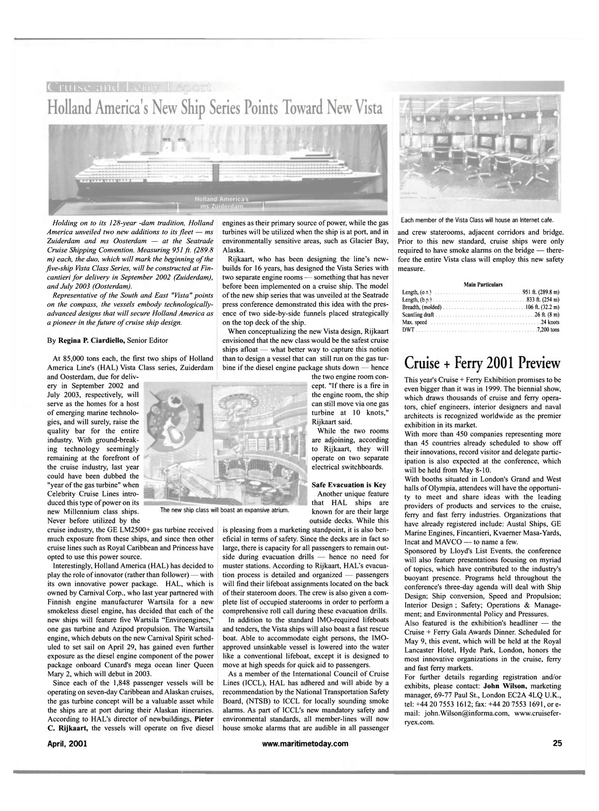