A multi-role hospital and support ship, built at Gijon yard within schedule, was delivered by IZAR to its owner, Spain's Instituto Social de la Marina (ISM, a fishermen's welfare and health care organization, part of the Spanish Social Security).

IZAR was awarded the design and construction of this vessel, that is intended to sail the oceans in support of the nation's fishing fleet — although the vessel will also assist any other vessel of any flag with logistic aid, medical care, pollution control, and even emergency towing and lire-fighting.

High priorities have been given in the design to the access and arrangement of the hospital and medical area as well as to the ship's maneuverability and operational efficiency, and its ability to launch and recover rescue and salvage boats.

The vessel, which measures 319 x 58 ft. (97.3 x 17.7 m), has been designed from scratch around the hospital and medical facilities, concentrated on one single level (the main deck), with direct and clear access from the helideck and rescue boat platform.

Facilities include emergency and first-aid room, operating theater, intensive-care unit, X-ray unit, isolation rooms and laboratory, as well as accommodation for 17 people in single and double outer cabins, plus a forward lounge for convalescent patients.

A forward cargo hold has space for medical containers carried under controlled temperature and humidity conditions, and an emergency power plant is installed for exclusive hospital use.

Additionally, separate accommodation on the upper deck is also provided for rescued people in 15 double outer cabins able to house 30 people, with their separate rest and dining rooms.

Two further decks over the main deck accommodate a crew of 38, including two health and other specialist staff, such as divers, expected to be employed on solving common fishing problems such as clearing fouled propellers and repairing hull leaks.

The vessel, which carries the most updated equipment for spill control and oil recovery, and for fighting fire on other vessels, is able to supply emergency towing, fuel, drinking water, power and compressed air.

The arrangement grants the hospital, medical and rescue assistance areas a full independence and insulation from the rest of the vessel. Insulation, including an extremely low level of noise and vibrations, actually was required not just for comfort, but for meeting surgical and medical specifications.

While onboard safety remains a top priority, Izar also took into consideration the vessel's comfort, which is ensured by a pair of folding fin stabilizers. All the latest regulations for passenger ferries are met, including an ability to survive 500 mm water on the main deck.

The system, combined with a pair of flap rudders, guarantees improved maneuverability and steering, and reduced noise and vibration, even at very low speed.

With an operational range of 7,000 miles, the vessel has a service speed of 16.9 knots; a trial speed of 17.2 knots at 90 percent of the maximum engine rating has been programmed. 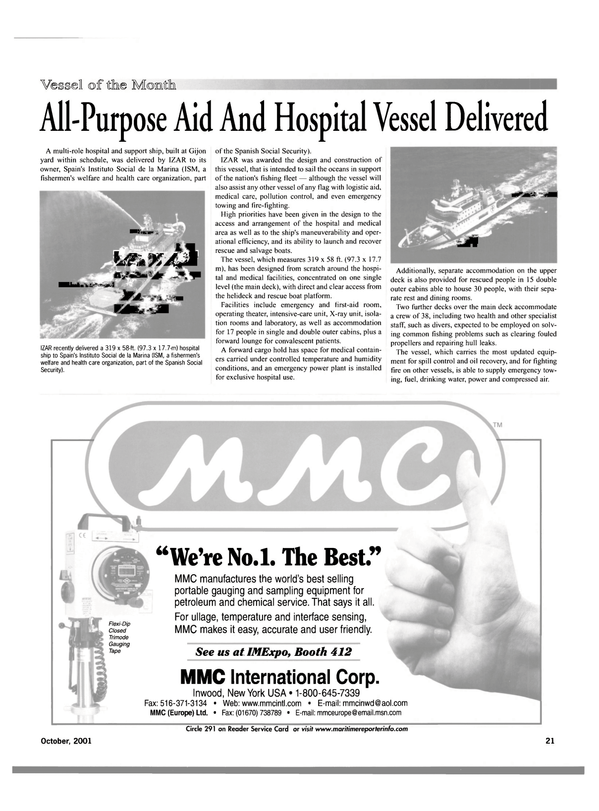