Sea-Kindly: A Steady Vessel by Design

Seakeeping refers to motions of a vessel in waves, but sea-kindliness is a characteristic sought after in most vessels. A sea-kindly vessel is easy on its crew and easy on its gear. Trying to d e f i n e sea-kindly is d i f - ficult. The deep sea mariner may use qualitative descriptions such as "an easy roll" or "a wet boat," but the vessel designer must look for quantitative descriptions.

There are six degrees of motion in a vessel, three are linear: surge, heave, and sway; three are rotational: pitch, roll, and yaw. (See Fig. 1). Each of these degrees of motion has associated values of amplitude, velocity, and acceleration. A vessel in a b e am sea can be rolling up to 30 degrees (amplitude) and the associated acceleration could be 0.5 g or 1 g. To a designer, the accelerations are usually the key value since they translate into forces on equipment and people. (Motion sickness is a f u n c t i o n of acceleration levels and periodicity.) The energy input for motions comes f r om waves and there are several terms that need to be considered.

Each distinct wave has a height (distance between trough and crest) and a period (time between succeeding crests). The sea is a spectrum of waves, which is comprised of a variety of waves of different heights and periods. The s p e c t r um can be characterized by two terms: the significant wave height and the modal period.

If we collect a thousand observations of wave heights and periods we can produce a graph similar to Figure 3. If w e take the average height of the 1/3 highest waves, that number represents the significant wave height. This method quantifies what people have his- torically observed qualitatively.

The modal period is determined by finding the average value of the wave periods.

Other factors that affect waves are the fetch and the water depth. Fetch is the distance of open water available for a wave system to develop. A protected bay has little fetch and waves cannot fully develop, regardless of the wind . strength. Water depth can produce larger waves, especially when the depth of water is less than half the wavelength. A good example of this occurs at harbor entrances, where a bar or local shallowing can develop. Such a bar can produce larger than ordinary waves as the wave energy is compressed by the rising ocean bottom.

In extreme seas two other characteristics come into play. These are deck wetness and slamming. Deck wetness refers to the presence of green water on deck, not just spray. Having waves board the vessel clearly limits the crew's ability to handle equipment or to safely move around. Deck wetness is a criteria that can be used for limiting operation.

Slamming is more serious. A vessel slams when the bow area is struck by or comes down on a wave. Slamming is characterized by zones of high pressure on the hull and associated shaking of the vessel. When slamming occurs, the operator must reduce speed in order to prevent structural damage to the hull.

Mariners have long known that if the wind begins to blow on an open, calm sea, after a while waves will develop and build until equilibrium condition is reached. This phenomena was categorized by the 19th century English sailor, Admiral, Sir Francis Beaufort, KCB.

This terminology has been adopted to define design conditions for vessels.

For the vessel designer, sea kindliness or ride quality must be expressed as a set of standards. Because of the varying nature of winds, operating areas, seasons of the year, resistance to motion sickness, etc., this usually means that statistics must be used. To say that a vessel has to work through Sea State 3 and survive a Sea State 5 is not precise.

Before defining the governing sea state one must consider where the vessel is to operate, what kinds of seas are prevalent at what times of the year, and what type of work will be done with the vessel.

For example, a research vessel handling plankton nets over the side can operate in higher sea states than one that will be handling an ROV. Therefore, it is important that the designer understand the vessel's mission and its limitations.

Having looked at the environment that provides the energy input to cause vessel motion, we next look at the vessel's response. The vessel system can be modeled as a linear mass spring system with a dampener. (See Fig. 4.) The vessel is the mass, the spring is buoyancy to restore the vessel to its equilibrium position as the waves pass under it, and the dampener is the sum of friction, turbulence, and drag. The equation of a linear system takes the form of F(t) = mg + mA + cV + kD where: F(t) = force varying over time m = mass g = acceleration due to gravity A = acceleration of the vessel c = damping coefficient V = velocity of the vessel k = buoyancy D = distance the vessel moves Note: It is important to recognize that vessel mass is a key factor in the equation.

For a given wave height, a heavy vessel will have lower accelerations or move less than a lighter weight vessel.

Another factor is the damping coefficient.

Adding bilge keels to a vessel increases the drag and turbulence when a vessel rolls, reducing motion. Finally, the buoyancy constant is proportional to the amount of waterplane area of the vessel. A slender spar buoy will move less than a fat can buoy.

This equation applies to each of the six degrees of freedom. Given the difficulties in solving six simultaneous differential equations, some standard simplifications are used. First, surge and sway are typically ignored since their magnitudes are usually small compared to the other motions. Yaw can be assumed to be countered by rudder steering forces, leaving roll, pitch, and heave as the primary motions of concern.

For example, in roll the "spring" is the vessel righting arm. A low center of gravity due to weight in the form of ballast will produce a different ride from the same weight carried as deck cargo.

Whether the ride will be better or worse will depend on factors such as hull shape, wave spectrum and weight distribution.

For the latter, consider an ice skater spinning around. By changing position of the arms, the speed of the spinning can be altered, with the arms tucked in close to the body causing the highest rate of rotation. Similarly, the distribution of weight on a vessel can affect the pitch and roll performance.

Many different approaches have been tried to improve seakeeping, from fundamental differences in hull shape to active or passive appendages. A brief discussion of each of these follows: M o n o h u l l - The traditional monohull has been the subject of much investigation for seakeeping. What we have learned is that long slender hulls have less pitching behavior, while short fat hulls are typically better in roll and heave. Deck wetness can be limited through good bow shape and hull flare.

A round bilge hull will have less roll dampening than a hard chined hull.

Hard chine boats can be subject to slamming in the bow area depending on the wave height and the vessel's forward speed.

C e n t e r b o a r d s - Centerboards are typically an airfoil shape with mechanisms mechanisms allowing them to be retracted into the hull. Placed at approximately 30 percent of the waterline length back from the bow, they dampen rolling motion and incidentally allow sonar transducers to be placed well away from noise sources in the hull.

Seakeeping is an important characteristic of any vessels. Motion, energy and design play key roles in the sea kindliness of a vessel. How friendly is yours?

John W. Waterhouse, P.E. received his B.S. in Mechanical Engineering from U.C. Berkeley in 1979 and his M.S. in Naval Architecture and Marine Engineering from M.I.T. in 1984. Before f orming EBDG, John worked for Nickum & Spaulding Associates as part of their preliminary design group.

Pick Your Design Many different approaches have been tried to improve seakeeping, from fundamental differences in hull shape to active or passive appendages. A brief discussion of each of these follows: (NOTE: Monohulls and Centerboards, not illustrated here, are discussed on page 30) A c t i v e R u d d e r s - Similar to the fin stabilizers, an active rudder system will turn the rudders to generate a counter force to vessel roll. This allows for the use of existing equipment, but obviously suffers in efficiency with comparison to fin stabilizers F i n S t a b i l i z e r s - By using airfoil-shaped fins mounted low in the hull amidships, significant roll reduction can be achieved when the vessel is underway. Such fin stabilizers use a motion sensing controller that signals the fin to change its angle of attack to the water, thus producing a countering force to the wave motion. Fin stabilizers are typically electrohydraulic units and are more effective the faster the vessel is moving.

Bulbous bows - These were originally developed as a means of reducing vessel resistance.

Researchers later observed that depending on the bulb's size and shape it could improve pitch resistance. In extreme seas however, when the forefoot of the vessel emerges, an improperly designed bulb can contribute to slamming.

C a t a m a r a n Hull - This type of vessel has some limits for seakeeping imposed by the hull design. If the wave period is twice the spacing of the hulls, then the natural frequency in roll creates a resonant condition and extreme motions.

Further, the cross structure is vulnerable to slamming if the wave heights are large enough.

Finally, due to the relatively short hull length for the displacement, catamarans can experience significant pitch motions.

Anti-roll tank - To combat vessel rolling, designers have used different styles of water ballast tanks. By placing such tanks up high on a vessel and by tuning them to the vessel's natural roll period, significant improvement in motions can be achieved. The disadvantage of these tanks is that they need to be located in prime parts of the ship to be effective. A particular advantage of such tanks is that they are effective at a range of vessel speeds.

SWATH Hull - This type of vessel, a Small Waterplane Area Twin Hull, has excellent seakeeping characteristics. The design consists of two submerged hulls with slender struts rising through the water's surface to support a crossstructure.

Because the buoyant hulls are well below the water's surface and by keeping the struts as slender as possible, there is little opportunity for the waves to act on the vessel.

The main vulnerability is slamming on the cross structure when the waves get large enough.

B i l g e k e e l s - These passive devices have typically been used to add damping in roll. A fixed plate running approximately 40 percent of the vessel's length along either side of the hull, the bilge keel must be placed to maximize hydrodynamic drag in roll and minimize hydrodynamic drag while underway. A drawback of this design is that gear being worked on over the side can potentially foul on the bilge keels 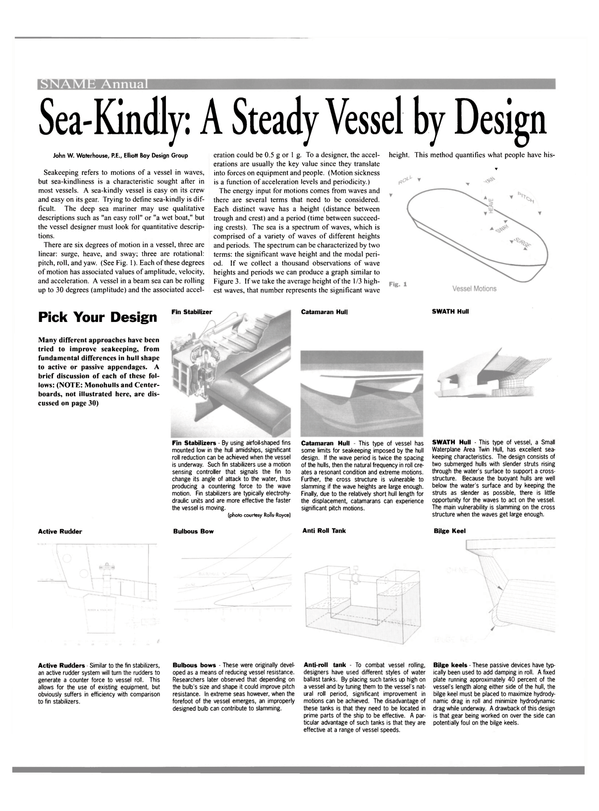