signed a preliminary contract with Verolme Botlek b.v. to attain an 85 percent interest in the Dutch offshore repair and conversion shipyard for $17.9 million.

The remaining interest will be held by the management (10 percent), and workers' foundation (five percent).

The acquisition of the shipyard, which is expected to be completed in the next few months (subject to due diligence and definitive agreements), is in synch with Keppel's near-market, near-customer strategy for a stronger foothold in the North Sea and European offshore and marine markets. Mainly, the North Sea holds Europe's largest oil and natural gas reserves and is one of the world's key non-OPEC producing regions — reaching 5.9 million bpd in 2001.

Established in 1954, Netherlandsbased Verolme Botlek provides integrated services and activities in offshore repair, conversion and modification work. Reporting a revenue of $13 million and profit before tax of approximately $5.9 million in 2001, the yard encompasses a total of 54 hectares.

Equipped with three drydocks up to 500,000 dwt and advanced workshop and craneage facilities, the yard's location in the Port of Rotterdam offers convenient access to both the North Sea and most of the industrial hinterland of Western and Central Europe.

Adding to its list of growing contracts, Verolme Botlek was awarded an order for the conversion of the world's largest stone dumping vessel. The contract, which was granted by Gorinchem-based Van Oord ACZ. involves the conversion of bulk carrier Kvitnes into the world's largest flexible fall pipe vessel. With work beginning this November, at one of the yard's graving docks, the main tasks, include: installation of an advanced dynamic positioning system (DP) system; installation of two retractable azimuth thrusters and two additional bow thrusters; alteration of the existing propulsion system;and expansion of safety equipment.

The conversion itself involves the 545 x 80-ft. (166.3 x 24.5-m) bulk carrier Kvitnes to be drydocked on a 9-ft. (3-m) dock block arrangement in dock 6, one of the yard's three graving docks — requiring 800 tons of steel. Following the conversion, Kvitnes will be re-christened Rocknes by Van Oord as the fourth fall pipe vessel to be operated by the company. 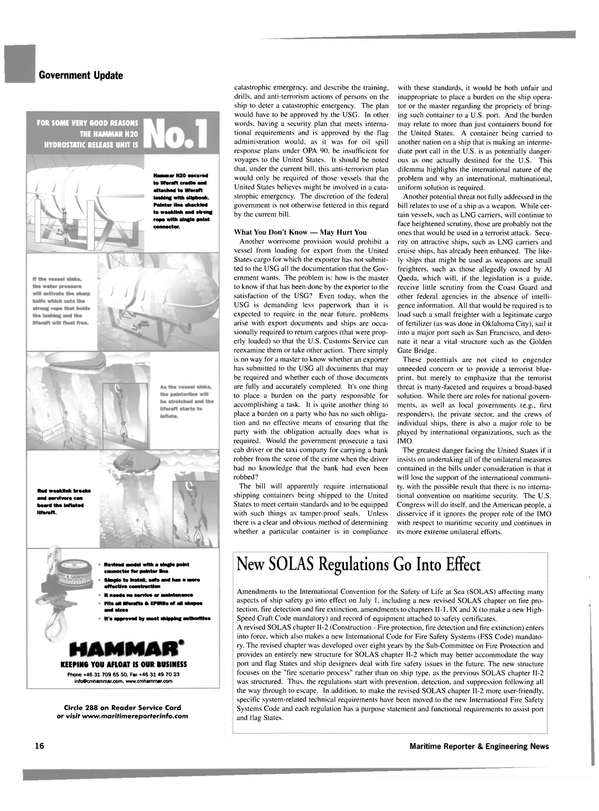