Cunard Line celebrated a milestone when a prefabricated section of the keel was lowered into the building dock of Queen Mary 2. The new $800-million Cunard flagship will enter service in January 2004 and will be the largest, longest, tallest and most expensive passenger ship ever built. Cunard chose July 4, 2002, as the date of its official ceremony because it is 162 years to the day that its first ship, Britannia, sailed from Liverpool on her maiden voyage to Halifax and Boston.

The first liner to be built since the line's Queen Elizabeth 2 entered service in 1969, QM2 is the first ship for Cunard by the renowned French shipyard Alstom Chantiers de l'Atlantique, one of world's most technically advanced shipbuilders who have built such famous luxury liners as Normandie, France and lie de France.

Because QM2 is a prototype of such unique design, the multi-million-dollar project employs teams of naval architects, engineers and maritime experts, including the marine interior design firms of SMC-Tillberg and Designteam, both based in London. Facilities include 1,310 fully equipped staterooms and suites, nearly three quarters of which will have a private balcony. On the technical side, QM2's powerplant will include two gas turbines and four diesel engines. More than two-thirds of this energy will be used to power a state-of-the-art Mermaid Pod Propulsion System, comprised of two fixed and two azimuthing pod units. The first four-pod installation to date, the powerful new system will provide a speed of nearly 30 knots with low noise and vibration levels and maximum maneuverability. 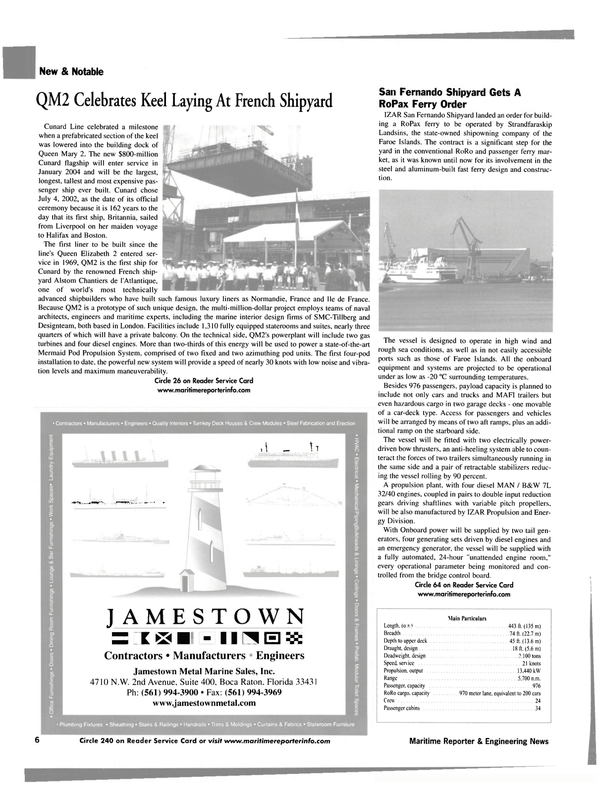