Ferry services to Venezuela's Margarita Island will be improved with the delivery of a second 282-ft.

The aluminum catamaran offers a more direct service for up to 828 passengers and 243 cars, and has been configured to carry trucks — another first for the Venezuelan fast ferry industry. For Conferry, this capability provides a year round source of income to supplement its more seasonal tourist traffic, while freight companies benefit from a significant reduction in transit time compared to the alternative of driving to Puerto La Cruz and taking a slower conventional ferry.

The addition of truck capability is one of a number of significant differences between Lilia Concepcion and Conferry's first Auto Express 86. Featuring bow and stern doors for drive-through operation, the garage deck has also been enhanced with a hoistable mezzanine deck. With this raised, 10 trucks may be carried in the three central lanes, which are strengthened for an axle loads of up to 12 tons. When the deck is lowered, a total of 243 cars can be carried, 21.5 percent more than on Carmen Ernestina.

Using the same propulsion package as Carmen Ernestina (4 x Caterpillar 3618 diesels each driving a Kamewa waterjet), Austal's latest Auto Express 86 achieved a loaded speed of just under 41 knots at 90 percent power during sea trials. This represents an increase of 1.5 knots over the contract speed. To ensure that the passengers' journey is as comfortable as it is fast, the vessel is fitted with a Seastate Motion Control System incorporating active interceptors aft.

Forward T-foils are not considered necessary for Conferry's service, however provision has been made to allow these to be retrofitted in the future if desired. 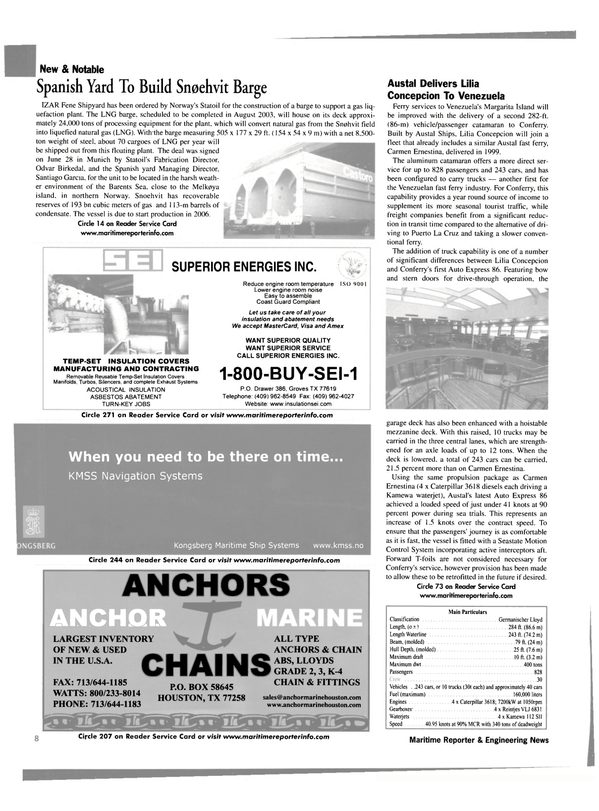