In considering activities in the U.S. maritime industry for the short and long term, it is unwise to start the conversation without a mention of the patrol and defense needs of the country in the mounting effort to secure nearly 95,000 miles of coastline. As plans emerge during the coming weeks, months and years, the only certainty is increased funding for a variety of ships, boats and marine-borne electronic surveillance systems geared toward meeting and defeating enemy attacks, both large and small.

An embodiment of the push for new technology is embodied in the activities of companies such as Larry Wieber's Aluminum Chambered Boats Inc. (ACB) in Bellingham, Wash. ACB has maintained a low profile during its first four years of operation, but with a growing demand for security craft, ACB and its product line have shone brightly in front of government buyers. Fresh from a defense exhibition in Virginia where his boats were put through rigorous paces, Wieber reports that the opportunities currently presented are vast, ranging from large contracts on the Federal level extending to a vast multitude of opportunities on the regional and local level. Wieber's ACB is well positioned to capitalize on the current and projected future spending spree by the U.S. government to shore up port, coastline and inland waterway security. As homeland security plans and funding still take shape, it is impossible to gauge the depth or breadth of the impact on small boatbuilders across the nation.

"There's a lot of jockeying for position right now," said Wieber. "With FEM A taking an active part in homeland security, there will be a lot of money funneled to local police and sheriff departments." Thus, demand will be high for a lot of 23 to 26 ft. trailerable boats, creating a highly mobile fleet able to be marshaled in a hurry.

"There is quite a large amount of money available for small boat procurement" for both the Navy and Coast Guard, echoed Rob Neal, a spokesman for U.S. Representative George Nethercutt (R-Spokane). For the Navy alone, the budget for the procurement of small boats more than tripled from $12.6 million in FY '01 to $37.3 million in FY '02. President Bush's Budget Request for FY '03 includes $33.6 million for Navy small boat procurement. Congressman Nethercutt was instrumental in introducing ACB technology to the Navy, and being that he is Vice Chairman for Defense Appropriations, he was the right man for the job.

Aluminum Chambered Boat was established by Wieber four years ago. The origin of the concept comes from New Zealand and Australia.

The flexibility of the ACB boat is embodied in its wide variety of applications, from recreational craft to heavy duty commercial workboat to military and patrol craft. One high-profile ACB owner is Jean-Michel Cousteau, who chose an ACB 2600 with twin 150-hp Evinrude outboards for work with the Ocean Futures Society.

About two years ago, a rapid succession of planning, opportunity and luck helped to put ACB firmly on the map, and on top of the wish list of public and private entities that seek a rugged, versatile and high performance boat with astounding weight-to-power ratios and low fuel consumption.

Wieber credits Congressman Nethercutt of having information on the boats put before the Navy.

According to Neal, a spokesman for Nethercutt, the Congressman jumped onboard an ACB earlier this year for a test ride and immediately became aware of the boats potential for use in military and harbor patrol capacities. Neal said his office regularly works with small companies in Washington State — small companies without large lobbying dollars — to introduce them to decision makers in Washington. "We made the initial contact and delivered a video, but the boat sold itself," Neal said. That point was obvious, as just two days after viewing the tape Wieber received a call from NAVSEA saying "We are very, very interested in your boats ... where have you been hiding? We are coming to see you." Tour of Duty The U.S. Navy and U.S. Coast Guard, with the DD(x) and Deepwater projects, respectively, have grabbed headlines while announcing billions in new business opportunities that will sustain the U.S.

maritime infrastructure for some time to come. The trickle down from military and coast guard projects will be significant to all sectors of the U.S. business, but the opportunity offered under the broad category of "port and waterway security" — which will include federal, regional and local dollars — should not be underestimated.

The waterborne forces tapped to protect and patrol, both near and far, is literally being reinvented. Military authorities are actively pursing the integration of small, fast, versatile craft that will allow a vast expansion in the collection, dissemination and utilization of information so that larger, slower, more expensive assets such as aircraft carriers, can be further shielded from potential harm. A vessel central to this concept — Westpac Express — though considered a surrogate technology, has won rave reviews from all corners of the military.

military by Austal Ships has exceeded all expectations in its first year of operation.

Having traveled in excess of 85,000 n.m. at an operational availability rate of practically 100 percent, West- Pac Express is now also playing an important role in the development process for future advanced vessel concepts for military use.

The U.S. Army Tank-automotive and Armaments Command (TACOM) has tasked the Carderock Division of the Naval Surface Warfare Center (NSWCCD) to conduct a range of propulsion, fuel economy and seakeeping trials on the Austal TSV 101. This information will not only provide baseline technical data for the wider Theatre Support Vessel program but will also establish performance thresholds against which future advanced vessel concepts can be compared.

"Austal considers the enhancement of the military sector's understanding of the true capabilities of its high speed craft platforms to be an important process in furthering their use in defense applications, and is thus keen to assist in projects of this type," said managing director. Bob McKinnon.

"We are very pleased that WestPac Express has been selected for this project." That role includes the deployment of troops, vehicles and cargo in the Western Pacific region for the Third Marine Expeditionary Force (I1IMEF) of the US Marine Corps based in Okinawa, Japan. WestPac Express arrived in Okinawa on July 12, 2001 to begin a proofof- concept period of operation. The success of the vessel during this period led to a three year contract with the U.S.

Military Sealift Command being signed in January this year — the first time the U.S. Military has contracted a commercial vessel of this type for military support.

The vessel has impressed the U.S.

Marines, as Lt. General Gregson, Commander of the IIIMEF in Okinawa, described the Austal catamaran as "a faster, better and cheaper way to deploy than any other we have had before. Not only has it lived up to our expectations, it has exceeded our expectations. 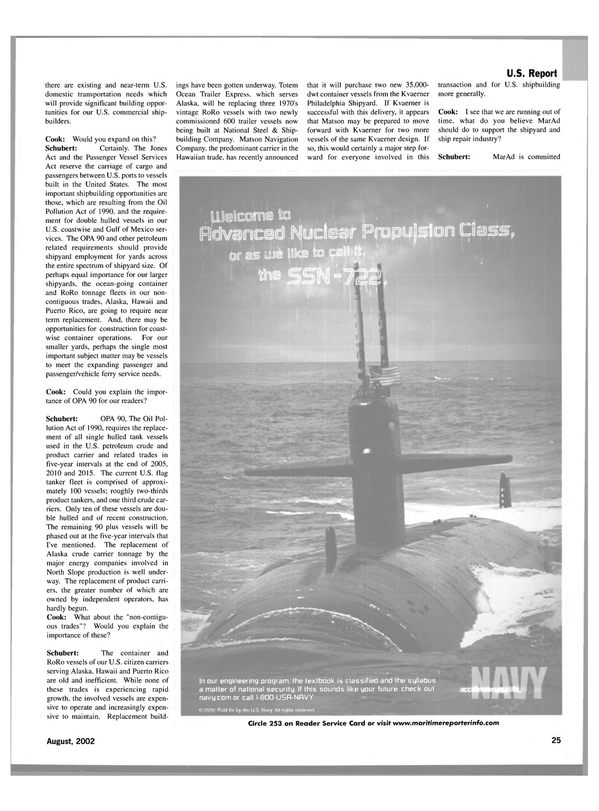