SAFENVSHIP, a $14.9 million EU project to develop design methodologies and testing technologies, which can be used in the development of future large passengerships, was launched at the Genoa headquarters of Italian classification society RINA on July 5. The project aims to provide the basis for a "safe and almost zero emission" cruise ship or ferry.

According to Fincantieri, coordinator of the project, "SAFENVSHIP is a good example of collaboration between shipyards, owners, class societies and manufacturers.

We are joining forces to provide the basis for designing and building environmental friendly and safe passenger ships at an achievable cost. It is a challenge at which we are sure to succeed, because the team is made up of companies who are the world leaders in their market." SAFENVSHIP. part of the Eureka R&D project, which is planned to be completed by September 2004, covers issues connected with fire and structural safety, evacuation, reduction of emissions into the air and minimization of releases to the sea. Besides the general management, Fincantieri will be in charge of the design aspects; RINA will be in charge of the fire safety aspects and of all the regulatory issues; Carnival and Grimaldi will be in charge of the impact of the new technologies on ship operations respectively on cruise ships and on RoRo passenger ships; Wartsila will be looking at further reduction of emissions from the engines; Rochem, UF and Scanship will explore promising technologies for (black and gray) water treatment and waste incineration; SAFETY AT SEA will be mainly in charge of the evacuation models; Marintek and Vienna Model Basin will be in charge of an exhaustive model test program related to structural safety and to the effect of wind and waves on the ship stability. 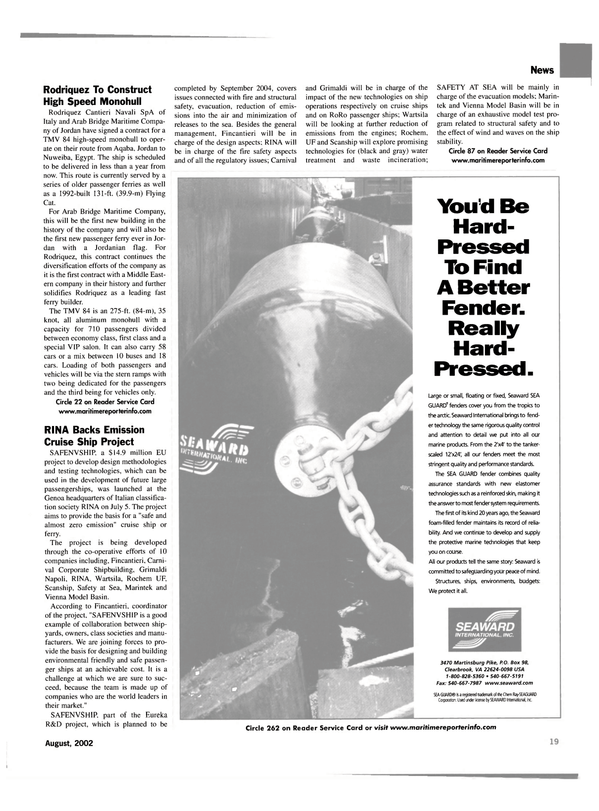