Derecktor Shipyards held a plate cutting ceremony on July 15 at its Bridgeport, Conn., facility for the first piece of plate cut for the high-speed ferry Fairweather. With Joe Perkins, Commissioner of State of Alaska's Department of Transportation & Public Facilities kicking off construction of the 235-ft. (71.6-m) ferry with one button push, thus began the computer controlled machinery, cutting the first plate for the ferry's hull. The $70-million project, which is funded by the Federal Government, will allow the State of Alaska to link Sitka to Juneau with fast modern boats, capable of an expedient one-day round trip, thus improving service to communities in Prince William Sound. The first of the two-part vessel series will go into service in 2004 — the second vessel will follow one year later. It was also made known at the ceremony that $12 million will be set aside for the option for a third boat. Derecktor, which teamed with naval architects Nigel Gee & Associates will use one of the firm's original designs — developed expressly for the Alaska project. Designed to DNV standards, the new boats are created to be safe, high-speed RoRo passenger ferries that are cost-effective and can transport 250 passengers on the main deck and 35 large vehicles at a service speed of 35 knots. 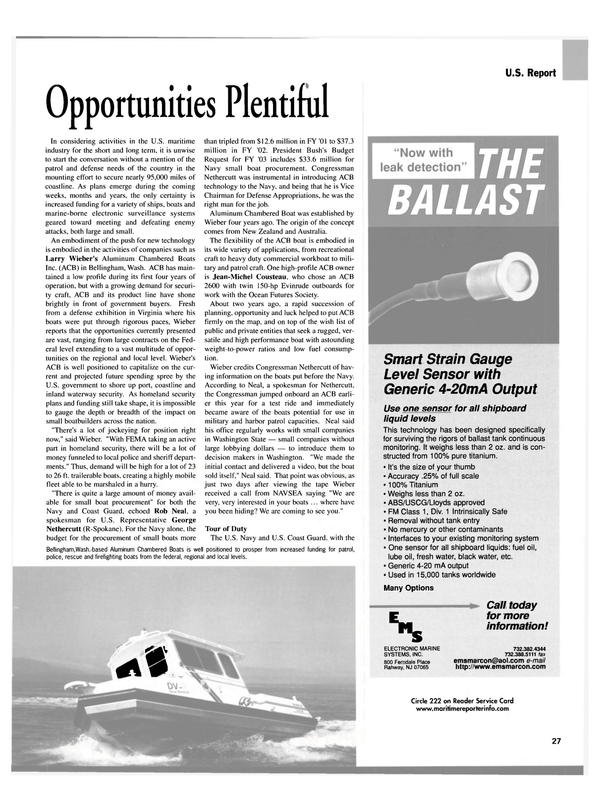