Maritime Security and the Hazards of Unilateralism

At the same time and under the leadership of the United States, the International Maritime Organization (IMO) is working hard to develop an international convention on maritime security. There is little doubt that Congress will complete its task before IMO completes its mission. There is also little doubt that, in some areas, the U.S. approach will differ from that to be taken by IMO. The international maritime community will thus be facing a situation not wholly dissimilar from that of just over ten years ago when the U.S. Oil Pollution Act of 1990 (OPA 90) challenged the approach taken by IMO with regard to double hulls on oil tankers and related matters. It is hoped that Congress will attempt to minimize the likely differences, but the Senate and House bills from which the final bill will be crafted, upon close examination, give one pause.

While the final version of the legislation remains under negotiation between the Senate and the House of Representatives, various provisions of the bills before the Conference Committee present potentially major international issues.

For instance, one provision would allow the United States to prohibit entry of a ship arriving from (or carrying cargo from) a foreign port found to not maintain effective security measures. It is one thing to place special conditions on a ship that may be carrying suspect cargo (e.g., quarantine), as another provision in the bill would do. It is quite another thing to impose a ban on the ship because, for instance, one container on board was transshipped through a port that did not have a United States Government seal of approval.

The measure also conflicts with at least the spirit of the message being conveyed by USG Administration officials, such as Customs Service Commissioner Robert Bonner, about how the new U.S. maritime security program will be implemented.

According to IMO Standards...

A related provision would allow the United States to prohibit a U.S. or foreign flag vessel from providing transportation between the United States and any foreign port that is served by vessels navigating to or from a foreign port found not to maintain and carry out effective security measures. This effectively would say that not only must you do things our way, you must also ensure that all your friends and acquaintances do it our way. It raises unilateralism to amazing new heights.

Under the draft international convention, carriers and individual ships would be required to develop security plans in accordance with IMO standards. Yet, it seems clear that these plans would not prove sufficient under the domestic legislation being considered in the United States. In the U.S., under the proposed legislation, vessel anti-terrorism plans would have to comport with national and area plan requirements, identify a qualified individual having full authority to implement the plan, ensure the availability of anti-terrorism measures to deter a catastrophic emergency, and describe the training, drills, and anti-terrorism actions of persons on the ship to deter a catastrophic emergency. The plan would have to be approved by the USG. In other words, having a security plan that meets international requirements and is approved by the flag administration would, as it was for oil spill response plans under OPA 90. be insufficient for voyages to the United States. It should be noted that, under the current bill, this anti-terrorism plan would only be required of those vessels that the United States believes might be involved in a catastrophic emergency. The discretion of the federal government is not otherwise fettered in this regard by the current bill.

What You Don't Know — May Hurt You Another worrisome provision would prohibit a vessel from loading for export from the United States cargo for which the exporter has not submitted to the USG all the documentation that the Government wants. The problem is: how is the master to know if that has been done by the exporter to the satisfaction of the USG? Even today, when the USG is demanding less paperwork than it is expected to require in the near future, problems arise with export documents and ships are occasionally required to return cargoes (that were properly loaded) so that the U.S. Customs Service can reexamine them or take other action. There simply is no way for a master to know whether an exporter has submitted to the USG all documents that may be required and whether each of those documents are fully and accurately completed. It's one thing to place a burden on the party responsible for accomplishing a task. It is quite another thing to place a burden on a party who has no such obligation and no effective means of ensuring that the party with the obligation actually does what is required. Would the government prosecute a taxi cab driver or the taxi company for carrying a bank robber from the scene of the crime when the driver had no knowledge that the bank had even been robbed?

The bill will apparently require international shipping containers being shipped to the United States to meet certain standards and to be equipped with such things as tamper-proof seals. Unless there is a clear and obvious method of determining whether a particular container is in compliance with these standards, it would be both unfair and inappropriate to place a burden on the ship operator or the master regarding the propriety of bringing such container to a U.S. port. And the burden may relate to more than just containers bound for the United States. A container being carried to another nation on a ship that is making an intermediate port call in the U.S. is as potentially dangerous as one actually destined for the U.S. This dilemma highlights the international nature of the problem and why an international, multinational, uniform solution is required.

Another potential threat not fully addressed in the bill relates to use of a ship as a weapon. While certain vessels, such as LNG carriers, will continue to face heightened scrutiny, those are probably not the ones that would be used in a terrorist attack. Security on attractive ships, such as LNG carriers and cruise ships, has already been enhanced. The likely ships that might be used as weapons are small freighters, such as those allegedly owned by A1 Qaeda, which will, if the legislation is a guide, receive little scrutiny from the Coast Guard and other federal agencies in the absence of intelligence information. All that would be required is to load such a small freighter with a legitimate cargo of fertilizer (as was done in Oklahoma City), sail it into a major port such as San Francisco, and detonate it near a vital structure such as the Golden Gate Bridge.

These potentials are not cited to engender unneeded concern or to provide a terrorist blueprint.

but merely to emphasize that the terrorist threat is many-faceted and requires a broad-based solution. While there are roles for national governments, as well as local governments (e.g., first responders), the private sector, and the crews of individual ships, there is also a major role to be played by international organizations, such as the IMO.

The greatest danger facing the United States if it insists on undertaking all of the unilateral measures contained in the bills under consideration is that it will lose the support of the international community, with the possible result that there is no international convention on maritime security. The U.S.

Congress will do itself, and the American people, a disservice if it ignores the proper role of the IMO with respect to maritime security and continues in its more extreme unilateral efforts. 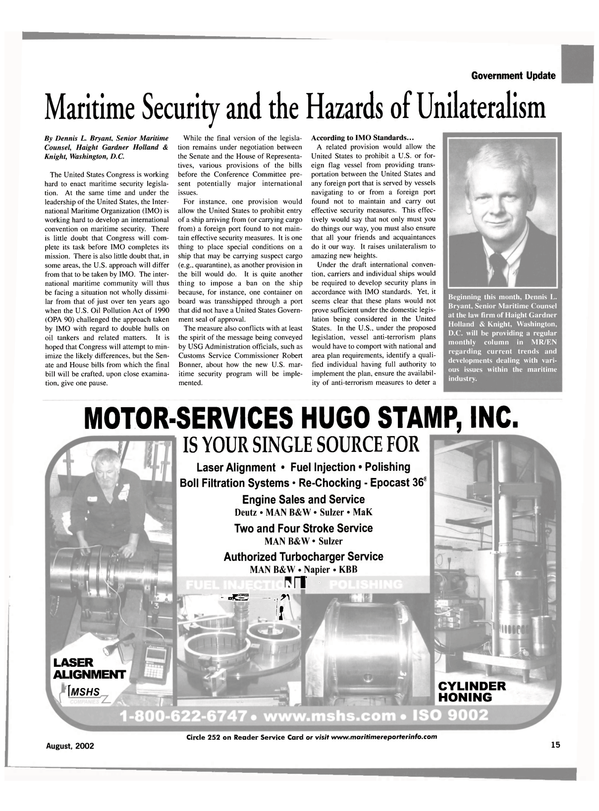 Read Maritime Security and the Hazards of Unilateralism in Pdf, Flash or Html5 edition of August 2002 Maritime Reporter