Disasters at Sea & Their Impact on Shipping Regulation

OPA OPA Double Hulls
The U.S. responded with the Oil Pollution Act (OPA) 90, essentially the first time a Port State had acted on its own to create and enforce rule that would affect global shipping. OPA created a comprehensive program to address prevention, response, liability and compensation for oil pollution incidents within U.S. waters.
It set requirements for construction (double hulls), crew licensing and manning, created the national Oil Spill Liability Trust Fund (up to $1B  per spill incident), mandated contingency planning and the development of disaster response plans from tankers, ties driving records with mariner licenses and mandated post-casualty drug and alcohol tests. It also decreed that all tankers entering U.S. water after a certain date be double hulled.
“The whole world felt that change,” said Bennett. And resisted at first. But a pile up of oil spills in European waters, particularly the Prestige and the Erika, brought an outraged EU in line with U.S. thinking quickly.
While not a perfect solution, the move to double hulls added to the level of environmental protection. “It’s why the record of the industry is better than it was in 1990, never mind 1970. It’s a combination of technological innovation and improved operating practices,” Bennett said. Indeed, figures from multiple sources show a steady drop in oil spills.
U.S. regulators also boosted the oil company pollution compensation ceiling while making the cost of having an accident “so prohibitively expensive that the industry got seriously inventive to avoid this liability,” said Bennett.

Coast Guard Gets a Wake Up Call
On the inspection front, the Marine Electric, and indirectly the SS Pendleton and SS Mercer, were game changers as well. All three were aging World WWII ships retrofitted to carry coal and other cargo. All three split in two, and sank. Eerily, the Pendleton and Mercer broke up almost simultaneously in almost the same spot off Cape Cod in November of 1952. With great difficulty and heroism, most of the crews were saved.
The Marine Electric has no such luck. In 1983 the “jumbo-ized” coal ship broke up during a winter storm off the Virginia Coast, and quickly sank. Only three out of the 34 men aboard survived. Survivor and Chief Engineer Robert Cusick decided to speak out about the conditions of the Marine Electric and other WWII ships of its ilk. Built with dirty or brittle steel during the war, some of these ships  had been “stretched” and then “banded” in place. Most were badly patched and barely hanging together. All of the ships were horror shows, says Frump.”
“The Coast Guard had been allowing a lot of American flagged ships to pass inspection even though it was abundantly clear that they were unsafe to operate, because the thinking was, ‘let’s keep the American merchant marine going. If we’re too strict, all these ships will be forced to shut down,” said Smith. And, noted Frump, “The truth of it was, if the owners and unions did not have these ships to sail, they would not have ships to sail.”
As an example of what the Coast Guard was letting slide by, Frump said that the cargo hatches for the Marine Electric were approved when it was in drydock – and the hatches were 200 miles away.
“It was that horrible and terrible.” When the hatches did arrive, they had 200 holes patched with expoxy.
Frump estimated there were at least 500 deaths due to the unsafe conditions of the old WWII ships, which he said “were sinking pretty consistently through the ‘50s, ‘60s and ‘70s.”
“You can’t have planes falling out of the sky, but apparently, you can have ships breaking in two over a period of 40 years, before any serious action is taken,” he said. Cusick’s decision to speak up, coupled with a scathing report from the Coast Guard’ s own investigatory board headed by Captain Domenic A. Calicchio, changed all that.
The Coast Guard was forced to reexamine and restructure its inspection policies and did an about face on WWII-era ships, establishing safety standards for older ships,  essentially sending 70 of them to the scrap yard in short order.
The inability to extract the exhausted Marine Electric crew from the frigid waters by helicopter lead to the launch of the Coast Guard’s elite helicopter rescue swimmer program in October 1984, whose motto is, “So that others may live.”  Despite the years of work often involved in getting a proposed safety change through the IMO process of member state committees and debate, IMO acceptance and individual government approvals, followed by typically phased-in enactment, the process works.
Figures from multiple sources, including the “Safety and Shipping 1912-2012” report from Allianz Global Corporate & Specialty, the International Union of Marine Insurance, and the 2012 report, “15 Years of Shipping Accidents : A Review for WWF,” from Southampton Solent University,  show that the incidence of Marine accidents is significantly down, and has been trending down for some time now.
A Little Bit of that Human Touch
Looking forward, and some might say, very much in a proactive sense, the U.S. National Transportation Safety Board (NTB) hopes to see a shift in focus to what it sees as more key to the future of marine safety - the human element.
Aging ships, bad weather, high seas traffic and runaway cargoes aside, it’s estimated that 80-85% of all marine accidents can be traced back to human error.
And that is what many observers think the next generation of IMO protocols should  target.
“I think some of the more recent accidents highlight arguable the more challenging element to address – the human element,” said Tracy Murrell, NTBS director of marine safety.
“‘Blame the captain and fire that person.’ I always cringe when I see that, it’s just the easy way out.
Seafarers want to do better; they don’t want to go to work and cause accidents,” says Tim Donney, global head, marine risk consulting, Allianz Global Corporate and Specialty.
The biggest change he’s seen in 35 years of experience in global marine surveying and loss control is an evolution in how the industry approaches maritime safety. It’s moving from engineering fixes to problems, to addressing the human factors, he says.

Dealing with the ship
•    SOLAS (International Convention for the Safety of Life at Sea, 1974) lays down a comprehensive range of minimum standards for the safe construction of ships and the basic safety equipment (e.g. fire protection, navigation, lifesaving and radio) to be carried on board. SOLAS also requires regular ship surveys and the issue by flag states of certificates of compliance.
•    MARPOL (International Convention for the Prevention of Pollution from Ships, 1973/1978) contains requirements to prevent pollution that may be caused both accidentally and in the course of routine operations. MARPOL concerns the prevention of pollution from oil, bulk chemicals, dangerous goods, sewage, garbage and atmospheric pollution, and includes provisions such as those which require certain oil tankers to have double hulls.
•    COLREG (Convention on the International Regulations for Preventing Collisions at Sea, 1972) lays down the basic “rules of the road”, such as rights of way and actions to avoid collisions.
•    LOADLINE (International Convention on Loadlines, 1966) sets the minimum permissible free board, according to the season of the year and the ship’s trading pattern.
•    ISPS (The International Ship and Port Facility Security Code, 2002) includes mandatory requirements to ensure ships and port facilities are secure at all stages during a voyage.

Dealing with the shipping company
•    ISM (The International Safety Management Code, 1993) effectively requires shipping companies to have a licence to operate. Companies and their ships must undergo regular audits to ensure that a safety management system is in place, including adequate procedures and lines of communication between ships and their managers ashore.

Dealing with the seafarer
•    STCW (International Convention on Standards of Training, Certification and Watchkeeping for Seafarers, 1978/1995/2010) establishes uniform standards of competence for seafarers.
•    ILO 147 (The ILO Merchant Shipping (Minimum Standards) Convention, 1976) requires national administrations to have effective legislation on labor issues such as hours of work, medical fitness and seafarers’ working conditions.  This was superseded by the ILO Maritime Labor Convention, 2006) which entered into force on 30 August 2013. 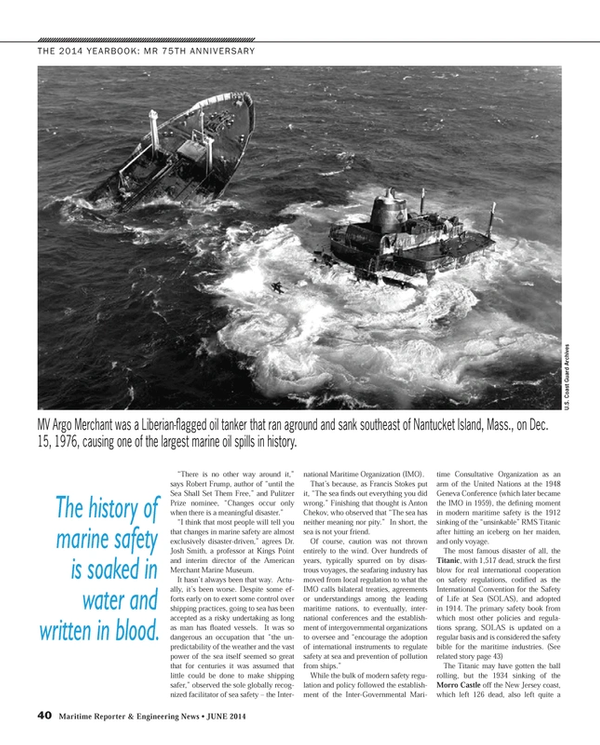 Read Disasters at Sea & Their Impact on Shipping Regulation in Pdf, Flash or Html5 edition of June 2014 Maritime Reporter