Metalcraft Marine Delivers for the Port of Houston

The Port of Houston Authority’s firefighting team recently received the third and last in series of high-performance emergency response vessels, a fleet of new vessels designed to keep one of the country’s busiest and strategically important waterways safe: The Houston Ship Channel. The Port of Houston Fire Department operates three fire stations stationed along the 52-mile-long Channel, and emergency professionals respond to marine and land fires and other emergencies along the upper ship channel. The three new vessels – the Firestorm 70 command center and high-speed response vessel built by MetalCraft – is a central piece to completing its missions safely and efficiently.
The new Firestorm 70 has quad diesel inboard engines to propel the boat to a top speed of 45 knots, versus the port authority’s current fleet which clocks in at 14-16 knot range. When selecting the new boats, the improvement in speed was deemed important to providing fire protection for the ship channel. But the vessels are not simply fast, as they are designed to be highly maneuverable, able to make quick stops and direction changes within three boat lengths.
Part firehouse, part boat, the vessel enables the crew to stay on station for extended periods. The cabin includes a primary care berth with four secondary berths in the cuddy. Portable berths can be positioned in the aft equipment cabin to handle injuries during incident.
Four firefighting pumps can produce flow meter results of 13,600 gpm at 150 PSI and 17,000 GPM at 130 PSI and stream up to 450 ft. with a roof-mounted Stang monitor, which is a stark improvement to the Authority’s current fleet and is three times the discharge rate of any of the Port Authority fireboats being retired. As a shore hydrant, the FireStorm 70 can pump 7,000 GPM at 70 PSI through 1,000 ft. of hose from a 5 in. Storz outlet before staging pumps are required.
Each fireboat is 70 ft., 10 in. long with a breadth of 22 ft., 10 in. and a draft of 34 inches. Funds for these vessels come mostly from federal grants to replace the three aging fireboats commissioned in 1973 and 1983.
MetalCraft Marine is a fully integrated designer and manufacturer of custom high-performance fire, rescue, patrol, research and other specialized work boats. The business was established in 1987 has emerged as a leader in the design and manufacturing of aluminum water-jet propelled craft with more than 550 hulls built to date.

History
In 1924, a fire in the hold of a steamship carrying cotton prompted the Houston Fire Commissioner to declare that the Port of Houston needed adequate firefighting apparatus to attack fires from water as well as land. A bond election to pay for the city’s first fireboat passed with a wide margin. This election occurred just one day after a fire along the banks of the Houston Ship Channel spread to oil on the water and burned for more than two hours, with flames as high as 40 ft. As a result, the fireboat Port Houston was built in 1925 and delivered the following year to the delight of thousands of spectators watching its arrival. The following day, another 4,000 citizens turned out for a demonstration of the fireboat pumping water.  In 1950, a new replacement fireboat, the Captain Crotty, was purchased, christened and put into service. The crew fought five ship fires and six refinery fires in the boat’s first year of service. In fact, at a fire at the General American Tank Storage Terminal, the fireboat spent 44 continuous hours at the scene, pumping for 36 hours nonstop.
Houston Ship Channel industries began to install manifolds on their docks in the 1950s to ensure that water would reach incidents at their facilities. The Channel Industries Mutual Aid group was also formed at this time. In 1971, the state legislature gave the Port Authority specific duties that included providing “for the prevention, detection, control and fighting of fires and explosions on and adjacent to the waterways, channels and turning basins within its jurisdiction.”
With such increased responsibility, fire-fighting capability had to be improved. The fireboat Captain W.L Farnsworth was acquired in 1973. In 1981, the decision was made to retire the Captain Crotty and purchase two newer fireboats, the J.S. Bracewell and the Howard T. Tellepsen. 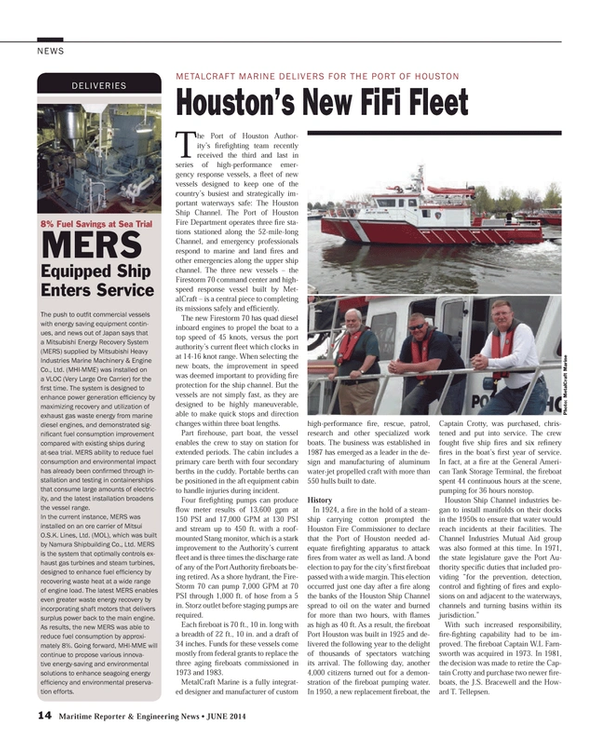 Read Metalcraft Marine Delivers for the Port of Houston in Pdf, Flash or Html5 edition of June 2014 Maritime Reporter