After 75 years another first: An MR-sponsored 6U T-Ball Team

West Palm Beach - The boys of summer are now proudly wearing the red & black of Maritime Reporter. With this publication’s backing, a 6U T-ball team is setting course for a championship.
This fleet of tiny titans drops anchor at Phipps Park in West Palm Beach each weekend, followed by a flotilla of fans. The boys, some of whom have played together for three seasons running, are seeing their hard work pay off.
New to the squad, first baseman Robert Howard is formidable at the plate and has a glove like a gill net. Anything but an ordinary average guy, pitcher Joe Walsh holds down the center of the infield, while shortstop Yampiel Chavez provides speed, range and power. Utility man Gus Doskey has never seen a base he didn’t want to slide into. Simon Fox comes from a long line of baseball-playing brothers and can play any position on the field, and Brian “Big B” Fowler provide depth at second and third, while free spirit Harrison Warwick handles the catching duties. In the outfield it’s brotherly love when Angel Perez and James Perez-Gomez hustle to the ball. To be fair, they’ve also been known to fight over it. The family affair continues with Bud Miller, Walsh’s cousin, who is the resident roughneck, and has the scars to prove it. Rounding out the group is Mr. Nice Guy Samuel Mojica, a gentle soul and man-child of few words who lets his bat do the talking. The Maritime Reporters are managed by Dan Doskey, who would be lost at sea without assistant coaches Rob Howard, Joe Walsh & Roger Warwick. However, the real captain of this ship is team mom Tracy Mojica, who keeps the dugout running on plane at all times. Big Red’s championship aspirations fell just short in mid-May, but the ensuing team party at a local restaurant buoyed the young slugger’s spirits, and presumably left the staff of the restaurant scarred for life. 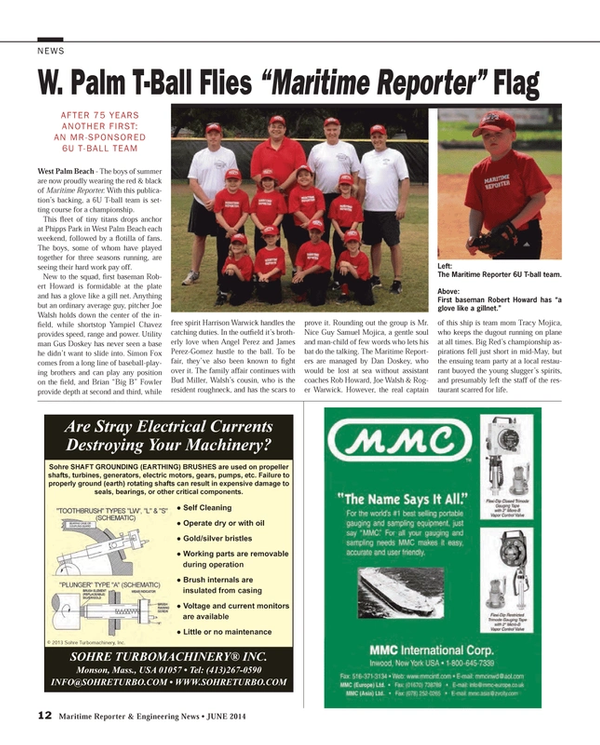