“Out of the Water in 60 Seconds”: Innovative Survivor+ Personal Overboard Survival System is new class of PFD with potential to significantly improve safety

Many people are still drowning unnecessarily at sea. Preparation, training and equipment undoubtedly save many lives, but the key questions remain: why are so many people still drowning and what solution exists today that may significantly reduce fatalities?
For anyone travelling by sea, whether a passenger on a ferry or a maritime worker, being in the water after falling overboard, abandoning a vessel or being involved in a helicopter ditching is a dangerous situation. Survivors face a greater risk of death with every additional minute spent in the water due to swimming failure and hypothermia followed by drowning. A key component to survival is being able to get out of the water as quickly as possible.
The regulations surrounding survival craft for the shipping industry is a key factor currently under debate and, more specifically, the subject of cruise ship safety has also been brought to the attention of legislators at a recent NTSB (National Transportation Safety Board) hearing. Whether lives could have been saved in recent tragedies such as the South Korean ferry disaster in April and the Costa Concordia shipwreck in January 2012 is also now being addressed.
In his March 2014 report, ‘The Need to Provide More Protection to Cruise Passengers,’ Captain William H. Doherty, Director of Maritime Relations for Nexus Consulting Group, warns about “reactive legislation.” He said: “To date, all legislation and regulatory activity has been more “reactive” to events which occurred that painfully identified our inadequacy to fully protect human life and our environment in the large cruise ship arena.”

Loss of Life at Sea
The highest loss of life worldwide is in the transport of passengers either on RoRo, passenger ferries, or cruise ships.  A number of these sail from under privileged countries and capsize as a result of overloading.  However other causes include collisions, rough seas, fire and or grounding.  During a 10-year period (2004-2014) approximately 4,631 people died on 13 maritime disasters. Statistics for the U.S. Fishing industry for a 10-year period (2000 to 2010) reports 545 casualties. Of these, 279 (51%) result after a vessel disaster, 40 flooding, 27 vessel instability, 26 large wave and 148 severe weather.
In man overboard (MOB) situations, freezing sea and air temperatures, disorientation, panic, high sea states, exposure to sea spray and frigid winds all combine to overcome a person in water within just a few seconds, even if they are wearing a PFD (Personal Floatation Device). Data published by the U.S. Coast Guard on the effect of hypothermia on most adults states that in a water temperature of 32.5F (0.3C), exhaustion or unconsciousness will occur in under 15 minutes with an expected time of survival of under 15 minutes to 45 minutes. In temperatures of 40 to 50F, exhaustion occurs in 30 to 60 minutes with the expected time of survival at 1 to 3 hours. In temperatures of 50 to 60F, expected time of survival is 1 to 6 hours.
John Swain, the CEO of Survival Systems Training Ltd in Nova Scotia, Canada, is an offshore safety and survival specialist, especially in relation to cold water emergencies: “There are three things that happen when you hit the water. First, cold water shock, which then introduces swimming failure, so negates your ability to tread water or reach safety if, indeed, it is available. Then quite quickly, hypothermia starts.”
Equipment such as buoyancy devices, life jackets, immersion suits and other PFDs have been the primary means to protect from drowning when entering the water without a life boat, but sometimes they are not enough in the most extreme circumstances. It is also true that multi-person survival craft and other life rafts can be very difficult to launch and board in extreme conditions.
There are many partial solutions that keep the survivor in the water, but there is also a more complete solution which could significantly reduce the risk of fatalities at sea by getting the person out of the water quickly, according to Cobham Life Support, part of Cobham plc’s Cobham Mission Systems division, an established safety systems market leader in the defense sector.

“Out of the Water in 60 Seconds”
Dr. Chris Brooks is an internationally recognized authority on life jacket and PFD use and cold water survival, and has produced reports in which he covers the need for forward-looking solutions. In the 2008-published report, ‘Survival at Sea for Mariners, Aviators, and SAR Personnel,’ Dr. Brooks writes about the inadequacies of life rafts and life boats, stating: “…a whole new concept is required to design a person-mounted life raft that may incorporate personal flotation and hypothermia protection, and most important of all be easy to board….”
One answer could be a completely new class of PFD which has just been launched for the offshore sector, but could also help save lives in other areas such as fishing, ferries and merchant ships. Cobham Life Support’s innovative wearable personal overboard survival system, Survivor+, uniquely incorporates both a SOLAS-approved inflatable life jacket and a tethered personal life raft into a single compact vest. It enables the MOB to remove themselves from the water and the elements in as little as 60 seconds, therefore significantly improving the chances of survival. The lightweight system can be worn without hindering movement, is easy to use and deploys automatically when the wearer is immersed in water, with a manual-only option also available.
“We need a different perspective on how to save lives,” said Don Blackman, Engineering Research Manager, Cobham Life Support.  “People are always going to end up in the water in the event of a disaster, but, if passengers or offshore workers had Survivor+ instead of just a regular life jacket, they will be able to be out of the water in only one minute. Survivor+ will not take up any more room than the current life jackets and we believe it would be less costly for the industry to adopt them.”
The major components of the Survivor+ system are already in use around the world.  The personal life raft has been in use by the US, UK and other military services for more than 20 years and was originally designed to save the lives of pilots and air crew who might have to ditch or bail out over cold water, and then have to wait for some hours for rescue to arrive.  The life jacket, as a SOLAS approved device, is used in a wide variety of global maritime operations. Survivor+ is a commercial version of the survival system used by the military, but with enhancements to make the product easy to use with minimal or no training.
Whatever the outcome of the current debate on future legislation surrounding out-of-water-craft on vessels, there is a strong case for the use of Survivor+ systems. If more boats are forced to carry survival craft, Survivor+ could be the answer for older vessels. It is less costly and will not require vessels to undergo the necessary rebuilding work to accommodate multi-person craft.
“We certainly identify with both sides of the debate,” said Don Blackman. “We agree with the experts that you must get people out of the water as soon as possible and into their own personal safe environment. We also recognise that the addition of large multi-person craft may not in fact save lives. They can be expensive and unwieldy, difficult to launch and difficult for people to board. Regulating the shipping industry to carry survival craft will not necessarily save lives if people can’t board them in a catastrophic disaster situation. As with the recent Korean ferry that capsized very quickly, the captain stated he was worried about giving an abandon ship order because the passengers would end up in the cold water and potentially perish from hypothermia or cold water shock. These victims were unfortunately in a no-win situation.”
Awarded a certificate of compliance from Lloyd’s Register after successfully completing all the materials and performance testing required under the IMO Life-Saving Appliance (LSA) Code, Survivor+ integrates a life vest and raft, using Cobham’s own vacuum-packing technology, and is so ground-breaking, that no specific SOLAS category exists for it. Other distinguishing features of the Survivor+ life raft include ballast bags and sea anchor to provide stability and a water activated strobe light fixed to the top of the canopy for enhanced night detection. An integrated PLB option is also available.
The debate will continue about reducing loss of life at sea and finding pro-active solutions. Survivor+ looks certain to form a part of these discussions, a point reinforced by Bruce McDonald, Technical Manager for Fire and Safety for Lloyd’s Register, who said: “Survivor+ provides a definite improvement to safety at sea.” 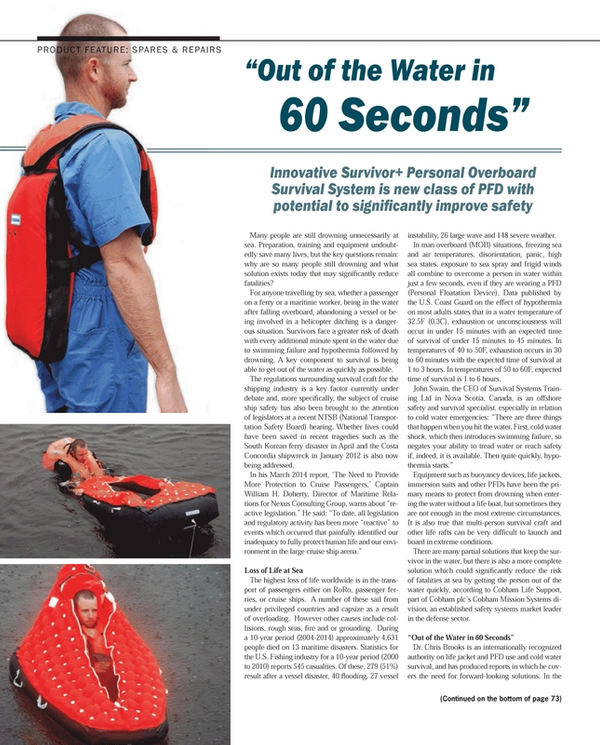