To address the sudden need for supplies overseas during World War II, the United States government launched the Emergency Shipbuilding Program in 1941 that resulted in the construction of more than 5,700 cargo ships for the U.S. Maritime Commission. 2,710 of these vessels were of a design that became known as Liberty ships. These vessels were designed as economically and quickly built cargo steamers that formed the backbone of a massive sealift of troops, arms, materiel and ordnance to every theater of the war. Two-thirds of all cargo that left the U.S. during the war was shipped on Liberty ships. From beans to bullets and, in some cases, troops, each ship carried almost 9,000 tons of cargo.
Located in Baltimore, Maryland, the S.S. John W. Brown is one of two surviving fully operational Liberty ships preserved in the U.S. Launched at the Bethlehem-Fairfield Shipyard in Baltimore on September 7, 1942—Labor Day—the Brown was crewed by about 45 civilian merchant seamen, and its guns were manned by 41 Navy Armed Guard personnel assigned to the ship. The Brown was fitted out to carry troops as well as cargo. Around 500 soldiers at a time could be transported aboard the ship.
The John W. Brown saw duty in many Mediterranean ports during invasions and steamed in convoys that were attacked by enemy aircraft and submarines, but it was never seriously damaged. In total, the Brown made 13 voyages during and immediately after World War II. Her maiden voyage was to the Persian Gulf, carrying military equipment for Russia. Most of the rest of the ship’s wartime voyages were to the Mediterranean Sea, including duty during the Anzio landings. She also served an important supporting role for the invasion force of southern France during Operation Dragoon in August 1944.
Immediately following the war, the Brown carried government cargoes to help rebuild war-torn Europe. From 1946 to 1982, the ship served as a floating maritime high school in New York City. In 1983, Project Liberty Ship acquired the Brown and, in 1988, moved the vessel to the harbor of her birth where it serves as a memorial museum ship to this day. The John W. Brown is one of only a few ships listed in the National Register of Historic Places.

Quick Build, Long Life
Liberty ships like the Brown were not expected to last much longer than five years, but the 441-foot-6-inch-long Brown looks and sails almost exactly as she did at the end of the war. Still powered by a reciprocating, triple-expansion steam engine, a relic from an earlier time in maritime history, the Brown’s engine is fed with steam from two oil-fired boilers and drives a single four-bladed propeller 18 feet in diameter.
The longevity of the Brown can be credited to the students and instructors who lovingly cared for the ship during her years as a high school, and to the all-volunteer crew that returned it to operating condition and continue to maintain it today. Another element of its longevity is the systems selected and installed all those years ago, including the ballast lines that are joined with Victaulic grooved couplings.
According to Mike Schneider, a retired Navy captain and volunteer on the Brown for more than 25 years, while not all of the ballast lines are still used for their original purpose, “the lines still have fluid in them so they have to be integral or pipelines with integrity; we can’t have any leaks in them.”
For more than 70 years, the lines have remained leak-free. According to Schneider, there is no known record of any maintenance being performed on the ballast lines. The grooved couplings visible on the piping today are the original couplings installed in 1942. In more than 70 years of service, the couplings never leaked or required replacement.

The Details
Found on the grooved carbon steel piping of the ballast system are flexible malleable iron Victaulic couplings, which at the time were referred to as standard couplings for grooved steel pipe. Victaulic Style 77 flexible grooved couplings are the equivalent of these couplings today.
Lines from the engine room to the forepeak tank, the bilge wells in the forward three cargo holds, and the #1 and #2 cargo deep tanks are joined with the couplings. The four lines to the deep tanks are 4-inch diameter lines and have around 32 couplings. These cargo deep tanks and the associated piping are not in use today, but were designed to handle cargo oil carried in the tanks. The single line to the forepeak tank is a 3.5-inch diameter line and has approximately nine couplings. This line is still in use and carries fresh water stored in the forepeak tank.
The four lines to the bilge wells in the #1 and #2 cargo holds are 3 inches in diameter and are for pumping water from the bilge wells. There are approximately 18 couplings on these four lines. All numbers are estimates because not all couplings are presently exposed.

The Benefits
From ease and speed of installation to accommodation of piping system movement and vibration, many of the reasons grooved couplings were likely selected for the John W. Brown are the same reasons grooved systems are specified for new ship construction, retrofit and repair today.
Because Liberty ships needed to be constructed quickly—Bethlehem-Fairfield could build one in as few as 28 days and launched an average of almost two each week—speed and ease of installation was probably the most important factor in selecting grooved joining systems for the Brown. Simply put, grooved mechanical piping systems help yards build, commission, test and turn over ships quicker.
A grooved joint comprises four elements: grooved-end pipe, a gasket, coupling housing, and nuts and bolts. The groove is made by cold forming or machining a groove into the end of a pipe. A gasket is centered around two abutted grooved pipe ends, and the coupling housing segments are placed over the gasket so that the key sections of the housing engage the grooves. The bolts and nuts are tightened with a socket wrench or impact wrench. In the installed state, the coupling housing encases the gasket and engages the grooves around the circumference of the pipe to create a leak-tight seal in a self-restrained pipe joint. Following installation, the joint can be visually inspected: metal-to-metal bolt pad contact confirms proper assembly.
With no heat or flame required for assembly, grooved systems offer easier, safer installation than welded systems. The lack of welding reduces or eliminates fumes and particulate matter emissions, hot works, fire watches and the confined space considerations and other precautions specific to welding. Compared to flanges, grooved couplings offer considerable weight and space savings.
The flexibility and vibration attenuation qualities of grooved couplings likely helped increase the life of the Brown’s ballast system piping. Flexible grooved couplings permit a limited amount of linear and angular movement at the pipe joint, which can accommodate system expansion and contraction and help absorb the strains and stresses imposed on the piping as a result of typical ship operating conditions. This flexibility can also accommodate minor misalignment, which would have simplified the assembly of large prefabricated sections of the Brown and the coordinating piping systems within each section. Excessive vibration can decrease the lifetime of a piping system, but the elastomeric gasket contained within the grooved coupling creates discontinuity, reducing noise and vibration transmitted through the piping.
The longevity of the John W. Brown and its ballast system demonstrate the advantages grooved piping systems can bring to the shipbuilding industry. Many of the qualities considered in pipe-joining systems 70 years ago still hold true today: speed and ease of installation and maintenance, safety, reduced fire hazards and issues associated with welding, reduced downtime, and reduction in vibration and noise transmission. Liberty ships were at one point referred to as “five-year ships” for their expected service life, but the Brown has proven that a well-maintained vessel with durable, reliable piping systems—the veins and arteries of a ship—can greatly exceed expectations.

Project Liberty Ship
Project Liberty Ship is dedicated to the preservation of the Liberty ship S.S. John W. Brown as a living memorial to the men and women who built the great Liberty Fleet and to the merchant seamen and U.S. Navy Armed Guard who sailed the ships across the oceans of the world.  Project Liberty Ship offers public tours, educational programs and Living History Cruises aboard the Brown. This “Voyage into History” is an exciting six-hour ride during which guests learn about the ship’s history through historical reenactments, live music, flybys of vintage World War II aircraft and tours of the museum spaces, crew quarters, bridge, flying bridge, chart room, radio room, mess rooms, troop berthing areas, stern gun deck and more.
Visit www.liberty-ship.com for hours of operation, to purchase tickets and to learn more about the history of the vessel and volunteer opportunities.
Ship Location: Pier One, 2000 South Clinton Street, Baltimore, MD
Phone: 410-558-0646

About the Author
David Gibbons is Maritime Division Manager with Victaulic, a leading producer of mechanical pipe-joining and fire protection systems. Victaulic develops products for a full range of industrial, commercial and institutional applications. For more information, visit www.victaulic.com. 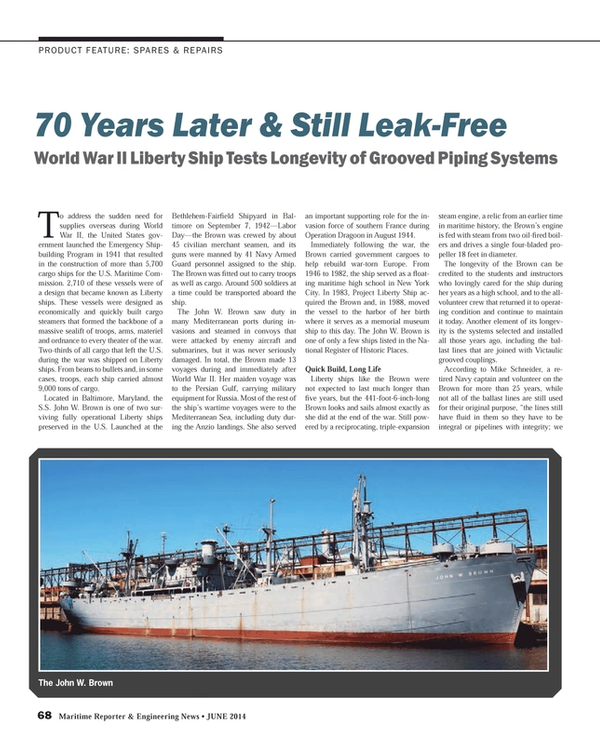