As the government of India strives to raise India’s share of the global seafaring community from 7 to 15 percent by 2020, at the same time, it struggles with the reality of an escalating death rate attributed to accidents and suicides among Indian mariners. According to the casualty figures released by the Directorate General of Shipping, government of India (the Indian administration) there were 25 accidental deaths, 2 cases of suicide and 8 sailors reported missing during 2012. Year to date data in 2013 suggests a similar and perhaps even slightly elevated pattern.
Since human factors are said to account for 80 percent of marine accidents, one of the administration’s many motivations for reversing the trend is that the inherent dangers are a deterrent to youth who might otherwise want to enter the seafaring profession. According to Gautam Chatterjee, the Director General of Shipping (DGS), who heads the Indian Maritime Administration, much depends on competence of the seafarer for reducing accidents. In his address on the National Maritime Day he also insisted, “For competence, one needs knowledge, skill (that is hands-on proficiency) and attitude. So in order to reduce accidents at sea, all these three aspects need to be targeted.”

Causes & Remedies
The faster turnaround of ships resulting in very short port stays and reduced opportunities to undertake maintenance of deck and machinery has, over time, brought tremendous pressure on seafarers. As seafarers hurry to complete work within a limited time frame, they also often end up getting injured. A new system, put into place for curtailing accidents, begins at the time of selection itself, wherein only the right candidate is allowed to register for training. The DGS has fixed norms for eligibility for candidates, including but not limited to minimum qualifications and psychometric tests. Beyond this, Behavior Based Safety Courses are being conducted for both pre sea and post sea levels.
“In order to reduce accidents, Anglo Eastern conducts various value-added courses to address knowledge and skill,” said Captain Kersi N. Deboo, Director & Principal of the Anglo-Eastern Maritime Training Center, a well-regarded India-based maritime training institute offering a large number of pre-sea and post-sea curriculum. He added, “Courses must be current, up-to-date, topical and with practical hands-on training. Because statistics indicate that 80 percent of accidents happen due to human error, we have introduced a number of courses to address the attitude and the behavioral aspects of error management / preventing accidents. We have a set of safety related courses which address occupational hazards, risk assessment and incident investigation. Further, we have a number of courses that address the behavioral aspects of behavior-based safety, maritime resource management, leadership and team work.”
He also points out that all these courses are incorporated in the recent revision of STCW 2010 where additional elements have been included at all levels of resource management, leadership and team work. After recognizing that attitude and behavior play a dominant role in reducing the cause of accidents, Anglo Eastern became the first training institute in India to introduce these requirements, well prior STCW 2010 coming into force. The 2010 amendment has made it part of the competency syllabus and are more of soft skill training.
“We conduct the courses at various levels,” says Capt Deboo. “We have occupational hazards, risk assessment, safety inspections and also maritime resource management and behavioral based safety at all levels. Besides, incident investigation and leadership for the senior level officers there are number of workshops based on case studies, experience sharing, role play and simulation exercise.”

Turning Knowledge into Policy – and everyday practice
Anglo Eastern says it all boils down to how much of the learning that takes place ashore is adapted on board. Shipping companies therefore need to develop a mechanism to monitor activities on board the ship, while also making senior officers accountable for developing a professional safety culture on board. This involves adequate preparations for every possible scenario. For example, port calls entail pre-arrival work, the inward passage, followed by cargo activities, port state inspections, agents, vetting, and a dozen more necessary tasks. Separately, ship’s engineroom staff has to perform maintenance on the power plant – all within a very narrow time frame. In other words: a stressful time where a large percentage of accidents are known to occur.
“Working under stress, seafarers are often pushed to work quickly,” says Captain Deboo. “Doing things fast without adequate rest leads to seafarers taking shortcuts or bypassing certain functions. This ultimately leads to mistakes. A thorough understanding all the equipment and the skill to do the job is of course necessary. So, too, is the right attitude, particularly the “buddy factor” – that is everybody working as a team; sharing the work load or warning somebody about any imminent danger or action that will lead them to harm.”

Human Error vs. Seafarer Error
Captain Yashoverman Sharma, Head of Training, International Maritime Training Center (Wilhelmsen Maritime Services), takes a holistic view. “It is wrong to assume that human error, which is associated with 80 percent of accidents at sea, is the same as ‘seafarer’ error,” he contends. “In fact, in my assessment, human error is 99.9 percent of the cause of accidents. Typically, losses suffered in any accidents at sea are considered in ‘dollar terms’ and human lives hardly factored into the equation. This is sad. On the contrary, everything else should be sacrificed to save human lives. In reality, this is rarely the case.”
Sharma insists that by assuming ‘human error’ being solely ‘seafarer error’ has led to the incorrect assumption that training (alone) can put an end to accidents. “But, I am sorry to say that it is not so,” he emphasizes. “They have identified human error as the critical issue and training programs are being revised to help the operators to reduce accidents. I am not saying this is not useful. It is very good. But I want to point out that eventually, the circumstances of the conditions under which such incidents take place involves more people than just the seafarer on the spot. These people are the ‘behind-the-scene’ operators.”
But then what is human error, he asks. Sharma points out that it is humans who make rules. If it happens that the port state control and flag state don’t do their duty well, then that too becomes human error. If the engine fails, leading to loss of life or property then that too becomes human error as the engine was designed by humans.  “Why should we equate human error to seafarer error alone?” he asks. “If I say the seafarer was fatigued and therefore his judgment was impaired leading to a collision or injury to himself, I would say that instead of falsely implicating the seafarer one must ask, ‘What about the people who put the seafarer in that position where he ends up getting fatigued?’ Shall we say that it is the company which should have seen that there were more hands on board or the administration that should have brought into place necessary preventive regulations? Or is it possible that the ship board management was responsible? There are so many possibilities.”
Sharma contends that very few accidents are really solely attributable to the lack of knowledge or skills. Furthermore, he says, every seafarer is under the threat of being blamed for the ship being delayed or the owner facing losses or the ship machinery or equipment gets damaged. So, he says, with the best of intentions people are driven to cause accidents.  According to Sharma, in any incident, before one assigns blame, it is necessary to see what created that accident. Under what conditions was the vessel being operated? Often the conditions under which seafarers have to work are not entirely under their control. Was it lack of spare parts, improper machinery and no money from the owner?
“I am not saying that the shipowners who spend all the money on training and maintenance of the ship do not experience accidents; there are accidents still happening,” Captain Sharma says, “The best of companies have faced marine disasters. It is a matter of reducing risks that is important. It does not end only with issuing instructions to the ship. There needs to be support as well. I say one must delegate more powers. If proper responsibility is given and conditions created for operating the ship safely, then accidents will reduce.”
Sharma had more to say. “Accidents which are assigned to the human element cannot in my opinion be attributed to seafarers alone. It also involves the operators and working environment they have created on the ship, the designers of the ship, the naval architects, etc. Unfortunately, ship designers don’t typically sail on the ships that they design. It is found that many accidents resulting in injury or death to seafarers could have been avoided if care had been taken to integrate safety measures while designing the ship. Even in the administration, accountability is lacking. People survey ships and make it pass all safety tests. Should I say the surveyor did his job in the case of MOL Comfort?  Did he ensure that it would not break into two?”

Safety: Everyone’s Business
The takeaways from the foregoing discussions are clear. Of course, competence, knowledge, skills and attitude are primary ingredients of a safe and productive merchant seafarer.
At the same time, all of that can count for little if the mariner is placed into poorly designed physical surroundings, impossible situational scenarios, and with inadequate engagement from above and ashore.
It turns out that safety does come from the top: from the superior officer(s) on board, ship’s management ashore, the ship’s design team, the flag state and the classification society, too. The introduction of STCW and its many amendments is just one piece of the puzzle. Likewise, training alone will not prevent accidents from happening. And, until that reality is embraced by the full chain of personnel involved with today’s intermodal transportation chain, the inevitable accident will remain the rule, rather than the exception. 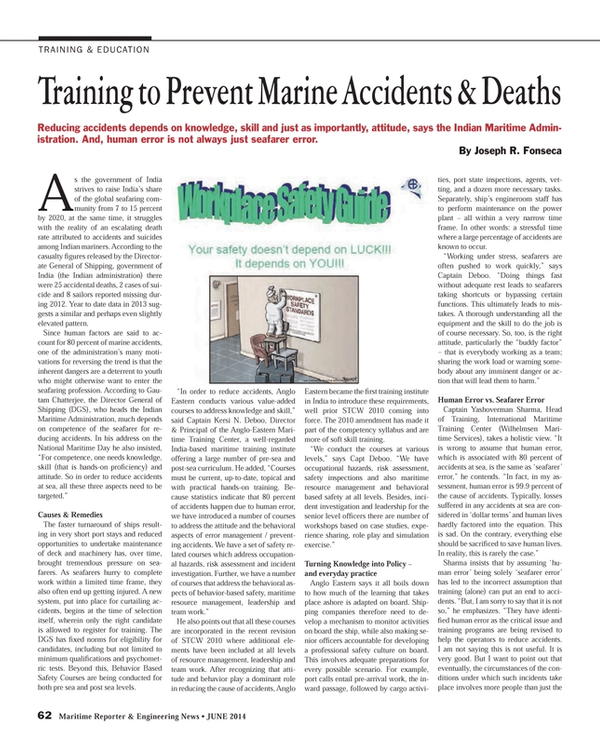