The new STAIMO software for Speed/Power Trial analysis and reporting on board was released last January for use by the worldwide maritime industry free of charge. MARIN, which assisted the STA-Group in these efforts, also offers a dedicated course (June 16- 20) for EEDI Verifiers and other stakeholders to allow them to get fully conversant with model tests, Speed/Power trials and the use of STAIMO.
Available via a dedicated website www.staimo.org, the STAIMO software package is the result of the implementation of the new ITTC Guidelines for Speed/Power Trials, which have been approved by the IMO’s MEPC for evaluating the ship speed for the Energy Efficiency Design Index (EEDI), which is now effective for most newbuild ships.
STAIMO has been developed by the STA-Group, comprising 38 leading ship owners, operators, yards, class and institutes, which have been cooperating in this field since 2002. With dedicated research on subjects such as measurements, analysis, wind and wave corrections and the conversion of results from trials on ballast draught to design draught, this group led the way to a new industry STA standard introduced in 2006.
Over the last two years the STA-Group has cooperated with the International Towing Tank Conference (ITTC) to develop this method and the underlying approach and models were scrutinized by the world’s leading hydrodynamic experts. The resulting ITTC Guidelines for Speed/Power Trials have been accepted by the IMO as the method to conduct and process speed trials in line with the EEDI rules. Subsequently, the STA-Group decided to develop the STAIMO software and release this as freeware in order to harmonize the EEDI and speed trial procedures worldwide. For use on board, the software, which has been certified by ABS, carries out analyses & reports can be downloaded from www.staimo.org. The Speed Trial Report produced by the STAIMO software can be verified by anyone via an Internet authenticity check. 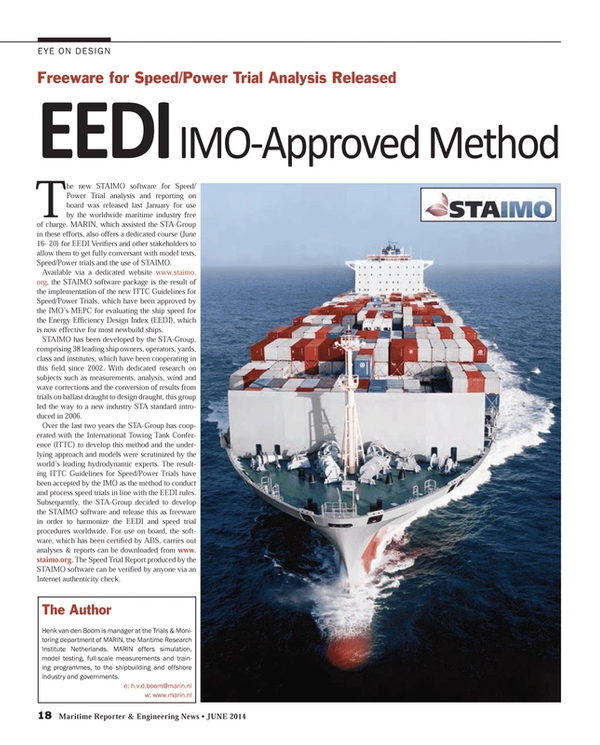