The maritime industry is at a crossroads, with a dearth of next-generation talent willing and available for a life at sea, yet increasing demands for efficiency and clarity of operations. At this crossroads lies modern communication technology, the connective tissue that can help to cure many of the industry’s ills, as Frank Coles, President of Inmarsat Maritime, contends.

Commercial shipping will always remain a pivotal link in the global transport chain, but the very nature of the industry is changing rapidly as the current group of mariners age and there is a decided lack of ample replacements available. Quite simply, the “millennials” are a generation more enamored with the computer screen than the operation and management of ships at sea.

While technology is part of the problem, it also is potentially a part of the solution, as increasingly ship owners – whether they like it or not – are providing mariners on commercial ships and boats a more dynamic and robust internet connectivity, allowing for an experience closer to shore side solutions and providing mariners the means to stay in touch with friends and family, as well as broadening entertainment options.

“When I go out and talk to seafarers and ship owners, what I hear is ‘we don’t want to give them internet because they will use it when they are on watch. We don’t want to give them movies because they’ll watch them into the middle of the night.’
So they (ship owners) put controls around it or they restrict it all together,” said Frank Coles, President of Inmarsat Maritime. Obviously it is in the best interest of Inmarsat and Coles … and for that matter all high-end suppliers of maritime communication solutions … that those attitudes change.
“First, don’t put internet access on the bridge. Second, if you give them access to the internet, and you give them tools and treat them like grown adults, then they will behave like grown adults. The moment you try to restrict it, they will abuse it.”

Coles is determined that Inmarsat stay on the forefront of connectivity matters for mariners, and was a driving force in the in the creation and recent introduction of Fleet Media, a new service to debut in July 2014.

Fleet Media will allow the latest films, as well as television programming, sport and news, to be viewable by the world’s shipping fleet. A globally-exclusive, five-year agreement allows for the content’s digital distribution via Inmarsat FleetBroadband.
A selection of movie and television packages will be offered every month, beamed directly to participating vessels over the Inmarsat network for ‘offline’ viewing on PCs, laptops and tablets.

Fleet Media will be available to all Inmarsat broadband service subscribers and content will be securely downloaded and stored on the vessel’s Inmarsat iFusion box. The service is transferable with any upgrade from one Inmarsat service to the next – such as FleetBroadband to XpressLink.

Market Drivers
While new rules such as the Maritime Labor Convention 2016 (MLC 2006) are touted to help the mariner, Coles is skeptical of its impact.

“The Maritime Labor Convention (MLC) requires ship owners to supply some internet connectivity,” said Coles. “Because the convention is so loosely drafted though, just giving access to internet, or just giving access to email, it does not quantify the cost or quantify the quality of the connection.
So you see everything from the (ship owners who are) leaders and innovators that are providing a (communications) pipe that is high quality, to the other end where it is a very poor connection, worse than dial up. But they have the check box.”

“The new generation (of mariners) are internet natives, they take the communications part of all of this for granted; they don’t think about how the internet gets into your house, they just expect it to be there,” said Coles. “The trick with the ship owner is to just expect the comms to be there. They do expect it to be there, they just don’t want to pay for the cost of a $400m satellite. But as we provide this new communications pipe, the crew benefits and the price will come down as well.”

Apart from crew connectivity, Coles sees the increasing flow of data, specifically data to and from onboard machinery and systems, as the second big driver in the maritime communications market. “CISCO estimates that by 2020 there will be 50 billion ‘things’ connected to the internet, all providing information. There’s already 12 billion,” Coles said.

While ‘the automated ship’ has long been theorized and debated, Coles said increasing the level of automation starts in the shipyard. “Hyundai and other yards are building ships with equipment that is all sensored” Coles said. “Hyundai themselves are selling ships on the basis that you buy the ship and you can buy a contract so once the ship has sailed it will continue to monitor, maintain and look after the ship.

Clarksons Research have estimated that by 2020 the convergence between IT and shipbuilding will be worth $35 billion. The convergence between sensors and things that are connected to deliver data and creating a smarter way of operating will be put on ships.”
In Coles estimation the remote monitoring is the bigger piece, citing research from ESRG that estimates that just looking at  today’s fleet, there is $20B of value that can be created by remotely monitoring and putting sensors on ships.

“That means pulling the cylinder before it fails, arriving to port on time, it means that just getting all of this information and running your ship smartly from shore,” said Coles. “They (ESRG) think you can save up to $1m per ship per year if you input remote monitoring of a smart ship with sensors and analytics, and using algorithms to come out with smarter business decisions. None of this is possible in shipping without a robust, industrial grade communications platform.” 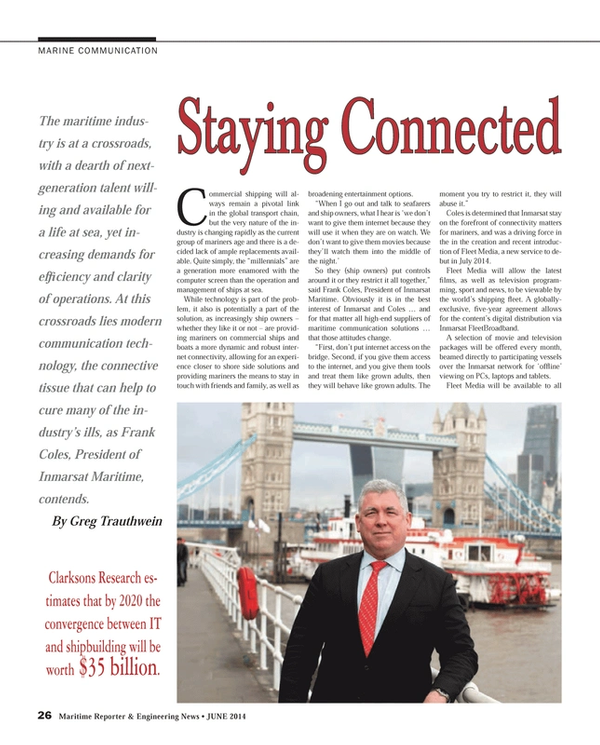