No Middle Ground for Environmental Lobby

When dealing with the environmental lobby, there’s really only one thing you need to know.

The nautical definition of middle ground is a length of comparatively shallow water having channels on both sides. In everyday language, we might call it a position of compromise between two opposing views or parties. That’s typically what reasonable folks try to achieve when resolving disputes or disagreements.
For some in the environmental lobby, however, there’s no such thing as middle ground. And, there never will be. The sooner the maritime industry and its oil & gas cousins wake up to this reality, the better.
I must admit that I am increasingly not a fan of the environmental lobby. That’s not to say I don’t support some of its collective goals and missions. I do. I’m just not a fan of their increasingly militant and dangerous methods. Just this week, oil major Statoil is reporting that Greenpeace activists had boarded the Transocean Spitsbergen, a drilling rig positioned about 300 kilometers offshore in the North Sea. The appalling photos of protesters dangling via ropes and wires off the side of structure left me wondering who and what they might have endangered as they “peacefully” boarded the rig.
This high profile event follows another attempt to disrupt the marine delivery of Russian oil in the port of Rotterdam, where, in this case, they were eventually foiled by local authorities. And, of course, there is the heavily reported case of the ‘Arctic 30’ which involves a group of Greenpeace protesters that were charged with piracy after their ship, Arctic Sunrise, was seized by security forces after a protest at a Russian oil rig.
Reasonable people can sit down and discuss a particular issue and come to a reasonable agreement about what should be done. In the case of the typical environmental activist, however, there will never be enough done by their corporate ‘opponents,’ no improvement in performance will ever suffice and nothing short of complete capitulation of anyone and everyone in their collective way will be tolerated. And, if along the way, this brings peril to those which they target for protest, well, that’s just the way it is.
The irony of the three incidents chronicled above is that in each case, it wouldn’t have taken much to have created a casualty that would have resulted in far more serious environmental or safety consequences than the protesters themselves hope that their actions will avoid. That a casualty did not occur is a tribute to the professionalism of all of the rig and tanker crews involved. In the ongoing case of the drilling rig Transocean Spitsbergen, Statoil reports that about one-half of the activists have now given up and left the rig voluntarily. As of this morning, Statoil was literally bending over backwards to be gracious in their treatment of the seven activists remaining on the rig, while also expressing great concern for the safety of the rig and all on board. It’s unfortunate that they cannot expect the same in return for their uninvited ‘guests.’
In a prepared statement, Statoil said, “We are pleased that some of the activists have given up and have chosen to leave the rig voluntarily, but we are still concerned for the safety of those remaining on the rig. Greenpeace has gained the attention they generally seek, and we have encouraged them not to challenge safety any longer. Statoil respects the right for legal protests and believes it is important with a democratic debate on the oil industry. Statoil has had a dialogue with Greenpeace over the last few months. We have informed about our exploration plans in the Barents Sea and the emergency response setup for the operations on several occasions, and Greenpeace has been given the opportunity to explain their views and ask questions.”
The statement went on to say, “For Statoil the safety of people and the environment is the first priority, and we do not want activity that can increase the risk level. Greenpeace has been explained the risk associated with actions against a rig in open waters. When they still use this form of protest we believe they act irresponsibly and illegally.” And, while Statoil has followed all of the legal steps necessary to carry out their business, it is clear that the protesters have not.
Closer to home, other activists often point to the poor performance of a domestic oil and maritime industry, while conveniently forgetting that this same business sector has improved its environmental footprint measurably, with oil spill volumes from tank vessels into US waters reduced by 99% since the early 1970s. In the last decade alone, spillage has been reduced by 76%. All sectors of the marine and oil & gas sectors continue even today to improve on that enviable performance. Not good enough, the activists will say.
A good bargain can be defined as one in which both parties come away from the table, each a little bit unsatisfied. That doesn’t mean the perfect solution can’t be a part of that equation. It’s just very unlikely when we are talking about the realities of modern commerce, logistics and the requirements of a demanding global society. In a perfect world, engines would put out no emissions whatsoever and not even a single drop of oil would ever be spilled. But, even protesters have to burn fossil fuel on their way to work.
Statoil’s actions and statements in the wake of the latest attack on their operations are admirable, responsible and measured in their delivery. Taking the high road, they’re also firmly anchored in the ideal position of compromise. In this case, however – and I suppose that they already know this – there’s no middle ground to be had. And, there never will be. From my chair, it is futile to negotiate as long as that’s the case. Beyond this, negotiating with someone who routinely puts your people, assets – and yes, the environment itself – into grave danger, is out of the question.


Excerpted from a May 28, 2014 post by Joseph Keefe on
MaritimeProfessional.com 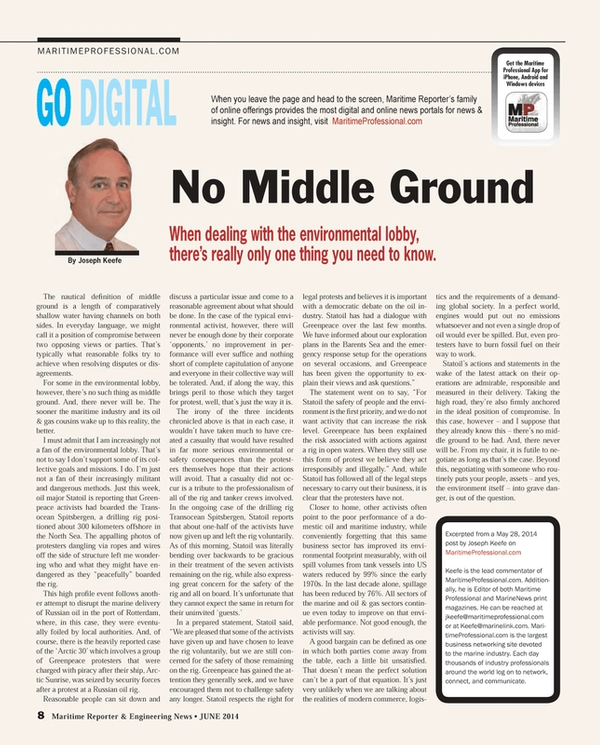