An offshore installation method that is more than three decades old is generating renewed interest from many operators who are challenged with designing heavy-lift crane installations. Float-over installation has become a cost-effective alternative to lift installation for offshore construction, as ever-increasing size and weight of decks constantly exceed the lifting capacity of floating cranes.
Exploration of oil and gas in more remote offshore fields is driving the increasing demand for larger offshore units along with float-over installations. In the coming four years, an estimated 660 offshore production platforms are expected to be constructed worldwide of which 180 weigh more than 12,000 tons.
Dockwise has a track record transporting and installing 15 topsides and with five in the backlog. The SHWE topside installation in 2012 was one of the world’s largest and heaviest topsides transported to date, weighting 30,000 tons (including the deck support frame–DSF) and transported for more than 4,000 nautical miles over a period of 23 days.

Float-over Strengths
Float-over installations have innate benefits due to the installation approach. One of the key strengths of the float-over is the lack of rendezvous risk, which is the schedule risk resulting from the need to have the crane and vessel in the field at the same time. In principle, float-over installations do not have a weight limitation as today’s heavy transport vessels (HTVs) are capable to transport and install mega sized topsides. In addition, integrated platform installation eliminates extensive offshore hook-up and commissioning resulting in limited overall offshore exposure.

Float-over Phases
There are several phases involved when installing a deck with a semisubmersible HTV. The first is the standby phase where the HTV is at a safe distance from the jacket but connected to the mooring system. Last minute arrangements such as preparing the vessel’s ballast system or the hydraulic jacks are under way.
The second is the docking phase where the vessel carefully enters the jacket slot, the distance between the jacket legs. Winches or tugs are used to pull the HTV carefully into position.
In the third phase, pre-mating, the vessel positions the deck directly above the jacket. Once positioned, the HTV ballasts to match the leg mating unit (LMU) with the receptors on top of the jacket legs. During this phase, it is critical that the vessel motions be limited to suit the chosen LMU geometry. No weight transfer yet occurs.
For a successful float-over operation, countless hours of preparation come down to the exact moment when the deck makes contact with the jacket. The fourth phase is the most critical point of the installation leaving no room for uncertainty in the functionality of the load transferring equipment.
In the mating phase, the deck is lowered onto the jacket by the vessel’s rapid ballasting system where large quantities of water enter the ballast tanks, which enable the HTV to submerge. During this phase, the deck’s weight is completely transferred from the vessel onto the jacket. Custom engineered elastomer is used in the design of the LMUs to dampen the friction during load transfer.
In the post-mating phase, the deck sits secure on top of the jacket and a gap is created between the deck support unit (DSU) and the HTV to ensure vessel motions will not cause contact between the two.
In the exit phase, the vessel departs from the jacket slot on its own propulsion or with assistance from tugs. These five phases may slightly differ depending on equipment and installation approach.

Float-over Requirements
There are three essential specifications required for an HTV to perform a float-over. The first is the HTV’s width being the right size. The vessel must be narrow enough to fit inside the jacket slot. Secondly, the vessel must be designed with an open stern and equipped with movable casings. The open stern enables the HTV to exit the jacket slot during the last phase of an installation. To ensure the deck is perfectly positioned onboard the vessel, casings, which facilitate balance and ballasting, can be moved to best accommodate the cargo. Lastly, HTVs must have sufficient strength and stability to carry and transport heavy decks. 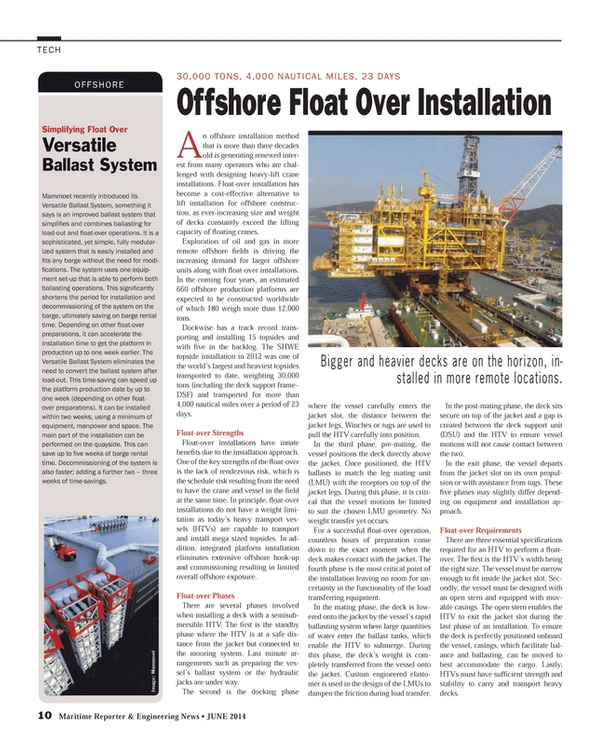