With innovation in its Norwegian DNA, Uksnoy Shipping took a chemical tanker and made it into an Offshore Service Vessel with an innovative propulsion system.


The conversion of a Turkish-made chemical tanker and its retrofitting with a promising new energy-saving propulsion system in 2013 suggested Uksnoy Shipping might not be like other owner-managers of offshore service vessels (OSV).
The ship, the 90-foot Rig Adromeda and its permanent-magnet propulsion from Inpower have made it possible for Uksnoy to ply the more remote offshore support markets — the domain of seismic vessels operating in virgin offshore acreage — with a special offer for survey outfits and oil companies paying for surveys and an OSV presence.
Uksnoy chief exec Oystein Uksnoy can now tell oil companies and geophysics surveyors that he’s compliant with upcoming energy efficiency rules for vessels; that the larger tanks in his converted fleet have made it cheaper to keep other OSVs on hand, and that he has a lower carbon footprint because of the Inpower retrofit of his vessel.
“We would like to have oil companies as partners, to have closer dialogue with them, for sure,” said Uksnoy, adding, “We see the market.” Yet, both he and his chairman tell us the goal is “to operate like other OSVs.”
The market is the huge new Barents Sea arctic oil province north of Norway as well as East Africa’s giant, untapped Rovuma Basin off Tanzania and Mozambique. Compatriot oil company Statoil — a giant local contact and charterer extraordinaire of high-spec Norway-based OSVs — is active in the Barents and soon to be very active off Tanzania. Anadarko, another oil major in Mozambique, is already an Uksnoy customer in the Rovuma, where other big oil companies have recently installed themselves. In these prohibitively remote areas, it can be several days steam between oilfield and depot, and today’s deepwater provinces are increasingly distant. OSVs must keep up with the newest high-spec rigs, the larger deck space of which enable prolonged drilling operations in need of prolonged supply. In the Barents and Tanzania, slow-moving survey vessels covering upwards of 10,000 sq. km. in a shoot are the perfect match for Uksnoy’s support vessels, especially the Adromeda, with its quiet, permanent-magnet motors.
“We have the quality they’re asking for, the vessel sizes and the capacities,” he said. Some of that quality is sure to be reflected in contract clauses that recognize what the Andromeda brings.
“The devil is in the (contract) details,” for a ship-owner/manager, said Uksnoy. The devil might be who pays for fuel, designates shipyards, supply routes, performance milestones or the day rates in a time charter. Uksnoy’s recent contract with Dolphin Geophysical off West Africa shows a contract can include crew transfers and fuel savings passed on.
The Inpower engine’s clear fuel-savings edge (a year on and still said to be up to 30 percent) means a smaller environmental footprint, increasingly a “binding” attribute under International Maritime Organization strictures. An industry source close to vessel deals confirmed for Maritime Reporter & Engineering News that “proximity” to an operational area and the corresponding fuel use and footprint are still, however, what wins contracts.
“NOx, carbon, (an ability to safely carry) urea are taken into consideration, but if you need a vessel at Port A instead of one staying at Base B, they’ll take the closer one,” the source said. The 12-knot Adromeda’s efficient engine, which can gear down, and its large refuel tank size could trump those winning conditions. Uksnoy ensured the supply tank on his 3,500 dwt conversion — largest vessel among the fewer than 100 support vessel types in the world, with most around 1,000 dwt — was also the largest of its kind at 2,800 cu. m., or three-times as much as rival support vessels. The Andromeda’s 166 cu. m. for its own steam means it can get to the 4,000-odd OSVs worldwide even if Uksnoy is only targeting the “low-spec” market.
“We’re in the volume market, the 2,000 (generally older types). We’re below the typical market for the brokers,” said Uksnoy, a former Farstad ship’s captain, while pointing to a map of Tanzania. Africa supplies 90 percent of his earnings.

Good Signs
Mr. Uksnoy’s core activity of “following seismic vessels globally” is part of a business that earned $18.1m in revenues in 2013. This year, he says, looks like a banner year at $20.6m, and one of his Barents clients has just secured arctic survey contracts with a trio of Norway-based oil companies.
The Rig Andromeda is in the second year of a contract supporting the operations of Dolphin Geophysical and Anadarko offshore East Africa.
The rest of the Uksnoy fleet comprises survey support vessels and the Geo Barents, an eight-streamer seismic vessel understood to be taking a pause in Aalesund, Norway after serving a major, multi-client seismic geophysical survey in the Barents Sea. A majority of Norwegian parliamentarians still support controversial Arctic exploration, so future surveys ought to continue well beyond next year’s expected bottoming out of seismic fortunes.
Any downtime after a contract is cause for some degree of nerves for any vessel owner, so wanting to trade “like other OSVs” likely indicates, our source says, “a desire to keep utilization up through the course of year, to be less seasonal and to have less downtime after periods of high activity.”
In the meantime, the Tanux I, Tanux II and Tanux III — Rig Adromeda’s “sister” ships — are all on charter, and this grandson of the Uksnoy who in ’33 started a family fishing business  has also kept alive his father’s 1970’s drive into the offshore market.
Mr. Uksnoy has taken the company into remote East African operations, where Statoil and other charterers have found some of the world’s largest deepwater gas fields. Maturing these discoveries into oilfields requires more seismic support.
“We know the market outlook for next year isn’t bright, but we expect to have a good year. We’re optimistic,” Uksnoy said. 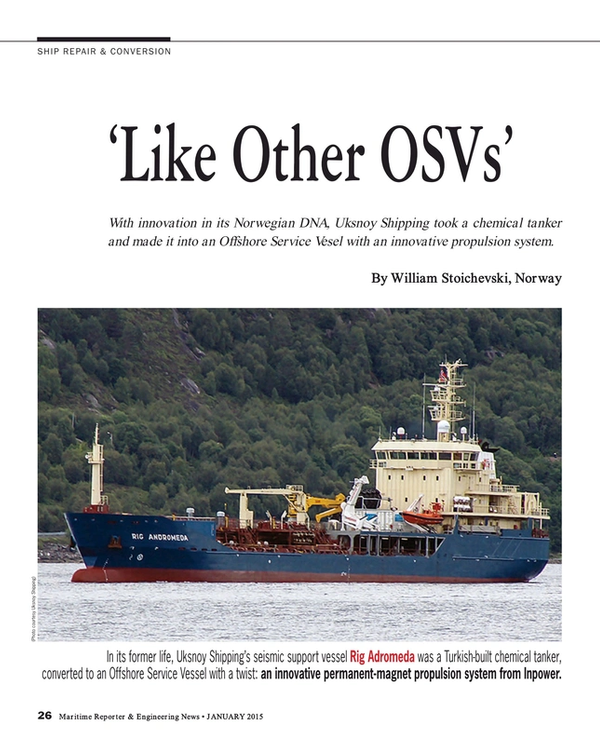