Editorial: BWTS. Like it or Not, Here it Comes

With age comes perspective, and in my 20 plus years reporting on this industry I have seen my fair share of regulation that has served to ‘raise the hackles’ of ship owners. It is quite simple really; new regulation often means new procedure, new design, new equipment and new costs. With the possible exception of the new rules in the wake of the Exxon Valdez which mandated double hulls on tankers, the Ballast Water Management System issue is the most acrimonious debate I have witnessed.
While ship owners understand the environmental need for a solution to the invasive species problem, the acrimony centers on uncertainty; uncertainty that comes when melding political agenda, technological development and market reality. While equipment manufacturers have been working furiously to develop, test and gain approval for their systems, deadlines for compliance and the threat of fines for ship owners are approaching rapidly. The overriding concern among ship owners is two-fold: fitting a system onto a ship, a system to procure and install that may cost millions, that ultimately might not be approved by the U.S. Coast Guard; and the shipyard backlog to get a system installed and operational in a timely manner.
Digging into the topic this month is Patricia Keefe who spoke with a long list of representatives of nearly every side of the topic, including vessel owners, ship yards and the U.S. Coast Guard. Disdain of the BWT issue among ship owners is no state’s secret, but perhaps the most telling quote comes from Graham Westgarth, COO of GasLog Logistics and a former Intertanko Chairman when he said:

“This legislation was pushed before the technology was ready, and it has led to a massive amount of uncertainty and a massive financial burden on the industry.  When you look at the amount of money that must be spent on this, it’s really something of a tragedy.”

Patrica’s story is the centerpiece of our Ship Repair coverage and starts on page 34.
Another recurring topic in our pages has been the migration of shipbuilding and ship equipment technology production from the U.S. & Europe to the Far East, specifically China, Korea and Japan. This month reporting from Germany is Peter Pospiech who delivers an insightful piece on MMG, a German manufacturer of some of the world’s largest ship propellers. Propeller technology is one of this industry’s great ‘secret sauces,’ and depending on the vessel type, area of operation and mission, propellers vary wildly. Pospiech recently visited with MMG CEO Manfred Urban, who shares with Maritime Reporter the art and science behind his company’s ongoing success in building and shipping from Germany to the Far East some of the world’s largest propellers. 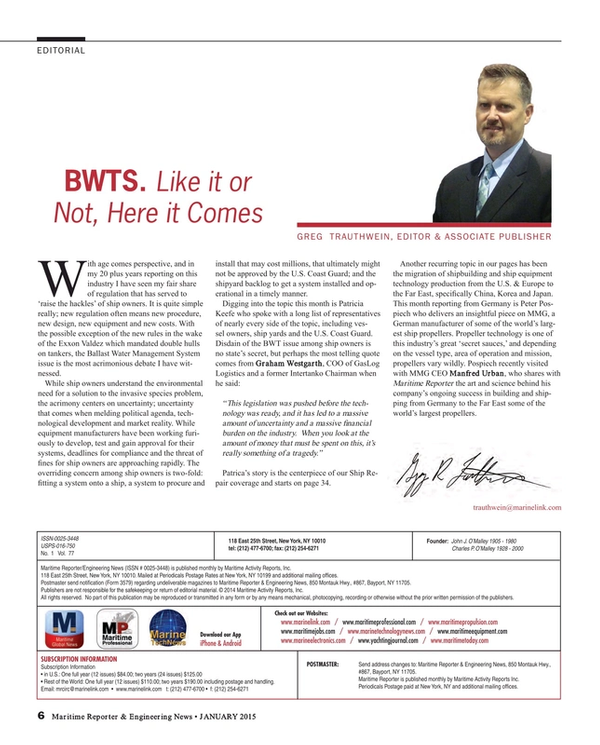 Read Editorial: BWTS. Like it or Not, Here it Comes in Pdf, Flash or Html5 edition of January 2015 Maritime Reporter