For decades the maritime industry has long-theorized of emulating the “airline model” in uniformity and technical capability of its own ship and boat integrated bridge platform. But the term “integrated bridge” itself is somewhat of a question, as there are as many definitions as there are current ‘solutions.’
Enter Rolls-Royce and the VTT Technical Research Center of Finland which together have launched a ship intelligence system that it believes could be the next major transition for the shipping, able to gather, process and reasonably present increasing amounts of complex and high-level data from onboard systems to manage propulsion, navigation and potentially lead .to autonomous vessels.
The latest vision of Ship Intelligence – a futuristic ship’s bridge concept – could become reality by 2025.
Rolls-Royce worked with VTT’s researchers and Aalto University to develop the new bridge, known as the Future Operator Experience Concept or ‘oX’ for short. It offers the crew smart workstations that automatically recognize individuals when they walk into the bridge, and adjust to their own preferences.
The windows of the bridge serve as augmented reality displays of the vessel’s surroundings, including visualization of potential hazards that would otherwise be invisible to the human eye. The system can, for example, pinpoint sea ice or tug boats and other craft that may not be visible to the crew, especially given limited sight lines on the world’s largest containerships, for example.
“We are entering a truly exciting period in the history of shipping, where technology, and in particular the smart use of Big Data is going to drive the next generation of ships,” said Mikael Makinen, President of Rolls-Royce – Marine. “Over the next 10 to 20 years we believe ship intelligence is going to be the driving force that will determine the future of our industry, the type of ships at sea, and the competence levels required from tomorrow’s seafarers.”
“With the demands of environmental legislation and rising operating costs, ships are going to become more complex. Add to that the fact that skilled crews are already in short supply, then we see a distinct gap opening up between the complexity of ships and the competency of the people who will crew them. That will cause real problems for the industry, and we believe it is ship intelligence, that will fill that gap.”
The oX concept, has been developed by studying user experience on ships today, and will transform the operating environment for crews on board large cargo ships and platform supply vessels. Using advanced 3D animation to illustrate just what could be achieved in the next decade, the new concept will use the latest digital techniques to create a safer and more energy efficient ship operations.
Rolls-Royce’s Unified Bridge system recently entered service on the vessel Stril Luna, representing a new ergonomic approach to all the activity required on the bridge of a ship, coordinating the operation of on-board equipment ranging from engines to propulsion and cargo handling.
The remote monitoring of equipment on board ships is also advancing, and Rolls-Royce has control centers in Alesund, Norway, and Rauma, Finland, where many ships and thrusters are already monitored in real-time in operation around the world.
“Many of the technology building blocks that will control the ships of the future are already available today, but there is still work to be done to develop marine solutions from them,” said Oskar Levander, Rolls-Royce, Vice President – Innovation – Marine. “We are investing in ship intelligence, which will be a major driver of the next transition era of shipping.” 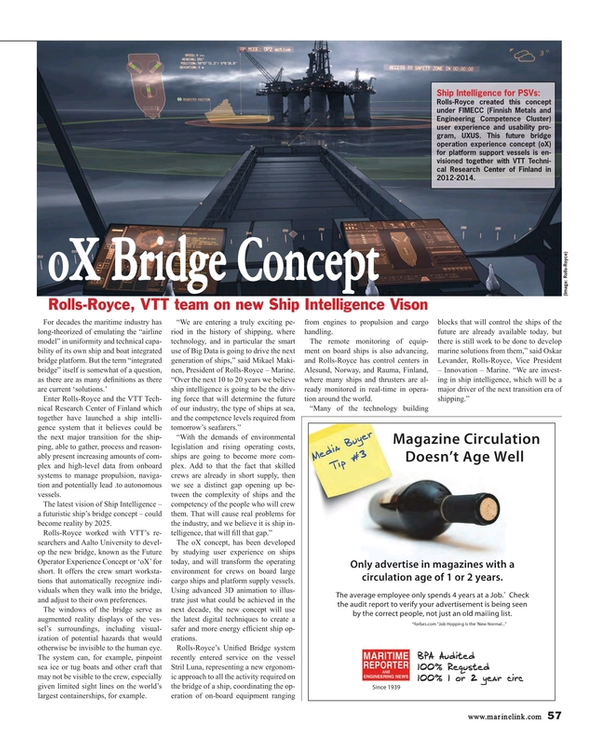