On the last day of what proved to be a busy Workboat show in New Orleans, Mikael Lindner, President, Scania North America, sat with Maritime Reporter & Engineering News to reflect on the current and future direction of the power company’s marine business in North America.
As the marine market follows in step with other transport and industrial sectors to literally clean up its collective act, marine power providers are at the tip of the spear in the quest to make commercial marine operations more environmentally benign and in line with new regulations on emissions.
Broad-based global corporate power companies such as Scania boast an advantage in this regard, able to apply lessons learned from other industries and leverage a well-funded R&D budget to ensure its lines are modern, capable and ready. “There is a buzz regarding Tier 4, even though it is still two to three years away,” said Lindner.  “I think we have a really good plan, and it is not rocket science by any means; you will likely need to have after-treatment in some form. As Scania is a global manufacturer of power for trucks, buses and many different markets, we have all of these technologies within our own company (to meet the strictest new emission regulations).”
Scania has been a face in the North American workboat market for several years now, entering a large and mature market with a history of providing power solutions across multiple industries globally. With a long-term plan to penetrate one of the world’s largest workboat markets, Scania’s patience is starting to pay dividends with steady growth in new installations and re-powers.
“Looking at North America, 2014 should be similar to 2013 in that we are on a constant growth pattern; 2013 was a record year for us, 2014 should be close and things look promising for 2015,” said Lindner. “Five or six year ago we started with our plan, and we’re starting to see this bear fruit now.”
According to Lindner, the success of the company in North America starts and ends with the quality of its engine family. “We have a very solid line-up of products, a very solid platform, that we continuously work on developing further in terms of power and performance,” said Lindner.  We concluded the introduction of the current platform two to three years ago with the addition of the new 16 and we introduced our Tier III engine line-up last year. Many customers have installed this platform now, and they are proving themselves: that’s a big driver, the product is installed and proven. “With our 16 you get power, performance and durability in a comparatively smaller and lighter package,” said Lindner. “The challenge is convincing the customer that they don’t need that much iron to power their vessel.”
This year was significant for Scania in North America as it continued to strengthen its dealership network and entered some new markets in Canada. “Canada, thanks to our distribution, is working well for us,” said Lindner.
Looking forward Lindner said a main focus now is the emission standards coming for ECA areas and IMO III. “After that, Tier 4 is the next big challenge,” said Lindner. “Without saying too much, the IMO III solution most likely will be a solution for Tier 4.” 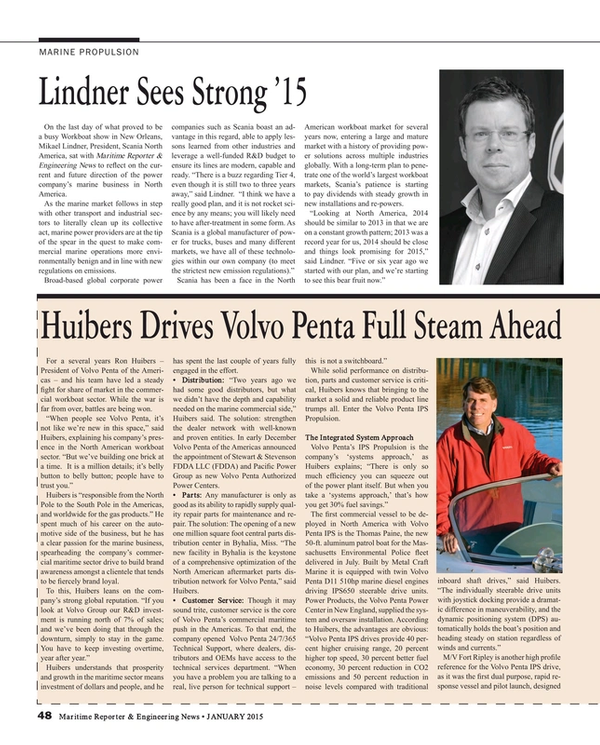