Passenger vessel safety isn’t just a third world problem. It’s a worthy challenge to take up in 2015 and at the same time, a completely sobering way to ring in the New Year.

As the clock ticks down on yet another year, I couldn’t help but take note of the new cruise ship passenger drill requirements, effective from 1 January. These rules involve heightened requirements for mustering of newly embarked passengers prior to or immediately upon departure. Appropriately, the amended regulation in the International Convention for the Safety of Life at Sea was adopted in 2013 in the wake of the Costa Concordia incident. This is intended to ensure that passengers undergo safety drills, including mustering at the lifeboat stations, before the ship departs or immediately on departure. And, not a moment too soon; apparently.
Previously, the rule called for the mustering of passengers to take place within 24 hours of their embarkation. Beyond this, an amendment to SOLAS regulation III/19, on emergency training and drills, makes mandatory the carrying out of enclosed-space entry and rescue drills, which will require crew members with enclosed-space entry or rescue responsibilities to participate in an enclosed-space entry and rescue drill at least once every two months.

High Profile Tragedies
The end of the year also brings my attention – as well it should yours – to the latest high profile ferry incident; in this case, an Italian-flagged ferry carrying 466 passengers and crew which caught fire and resulted in the deaths of at least 11 while sailing from Greece to Italy recently. Before that, a South Korean ferry capsized in April, killing 304 passengers. And, who could forget the Costa Concordia?
All three cases are particularly disturbing, not only because of the tragic loss of so many, but also because these incidents occurred in, and around (and the vessels operated by) so-called first world maritime nations. On this side of the pond, North American operators are hardly immune to the dangers of mishaps, with more than a few casualties occurring in the not-too-distant past, as well. That’s not to say U.S. and Canadian operators don’t have very good safety records – they do. The U.S. Coast Guard agrees. That said; the NTSB has its own opinions on the matter.

Are Domestic Passenger Vessels Safe?
The National Transportation Safety Board (NTSB) also released its annual “Top 10 Most Wanted List” of Transportation Improvements for 2014. New this year was the issue of passenger vessel safety. Between 2000 and 2010, several accidents involving passenger vessels occurred. Additionally, NTSB investigations “revealed in numerous cases that the cause of an accident was not the failure of the vessel but the lack of good safety practices that led to the loss of life and injuries.” Notably, the U.S.-based Passenger Vessel Association (PVA) earlier this year took vigorous exception to the NTSB attention, and our examination of the data backs up that position.
The domestic passenger vessel industry is highly regulated. Safety regulations for small passenger vessels took effect starting in 1996 for new construction, with phased implementation for existing vessels to be completed no later than March 2006. These regulations substantially upgraded small passenger vessel lifesaving equipment requirements. Since then, the defined weight of passengers on these vessels has been adjusted to 185 pounds, fully 25 pounds more than the previous benchmark of 160 pounds. Myriad other regulations also apply.

By the Numbers
I’m currently fully switched on to the world of ferries and passenger vessels, having just completed our annual Ferry and Passenger Vessel edition of MarineNews magazine. Yes, I edit that one, as well. We covered the world of passenger vessels from stem to stern, inside and out and when it was all ‘done and dusted,’ we also dug up some interesting – but thoroughly depressing – statistics about this vital sector. Consider the following (global) facts:
•    162 ferry accidents have occurred around the world from January 2000 to December 2014.
•    17,098 people died in these accidents.
•    Accidents occurred in 40 countries around the world
•    4 countries – Bangladesh, Indonesia, the Philippines, and China – account for > 50% of accidents.
•    95% of accidents occurred in developing world countries.
•    Bangladesh is far and away the most dangerous place to board a ferry.
•    Adverse weather is implicated in over 50% of accidents
•    Overloading is implicated in 34% of all cases.
•    Human error is implicated in 77% of accidents.
•    Human error is implicated in 87% of fatalities.
(*) Statistics courtesy of
Roberta Weisbrod and the Worldwide Ferry Safety Association.

As noted above – Bangladesh, Indonesia, the Philippines and China – account for the lion’s share of all accidents, with Bangladesh a clear leader in safety issues. But, as we all found out this year, you don’t have to be in Bangladesh in order to lose your life on a ferry. That could happen in Greek, Italian, or South Korean waters, and a hundred other places in between. And, it can happen whether or not your crew is STCW certified, or not.

Looking Ahead
It is easy enough to write about such issues, but another thing altogether to propose what might be done to mitigate the dangers fraught with boarding the world’s sometimes motley fleet of passenger conveyances. I don’t pretend that I am that person. Within the last couple of years, however, and as a licensed mariner, I took and passed two such training courses intended to do just that. In my case, I did it in an on-line format. The courses – Crisis Management (RO-RO/Passenger STCW), 2009 and Crowd Management (RO-RO/Passenger STCW), 2009 – are both Coast Guard approved curricula intended to satisfy STCW requirements, and are given by a reputable U.S.-based training institution. Both courses involved proctored final examinations.
As a general statement, and for those who haven’t had the opportunity or need to take such a class, the courses convey valuable information to the prospective passenger vessel employee. You don’t need to be a rocket scientist to get through them, however.
Combined with the other required regulatory training that seafarers everywhere must master in order to become certified for the tasks at hand, they may or may not be enough to avert the kind of tragedies which, unfortunately, have become altogether too familiar in the recent past.
What else can be done? For starters, it is clear – at least to me – that training and competency protocols represented by the International Convention on Standards of Training, Certification and Watchkeeping for Seafarers (or STCW) have, as a minimum, fallen short of their intended goals. Others, including the current President of the Massachusetts Maritime Academy, RADM Richard Gurnon, take the position a step further. For his part, Gurnon insists that STCW has done nothing to make mariners safer in today’s commercial merchant marine. He may be right. But, that leaves open the question of what else can be done. I don’t have the answer.
What we do know as a tumultuous 2014 comes to a close is that passenger vessel safety remains as a hot topic, an unresolved challenge and one which crosses all boundaries; financial or otherwise. We can pretend that it is, by and large, a third world problem. The people of South Korea, Italy and Greece might just disagree. As you launch into the New Year, add the challenge of making passenger vessels safer, no matter where they might operate, to your considerable workload. 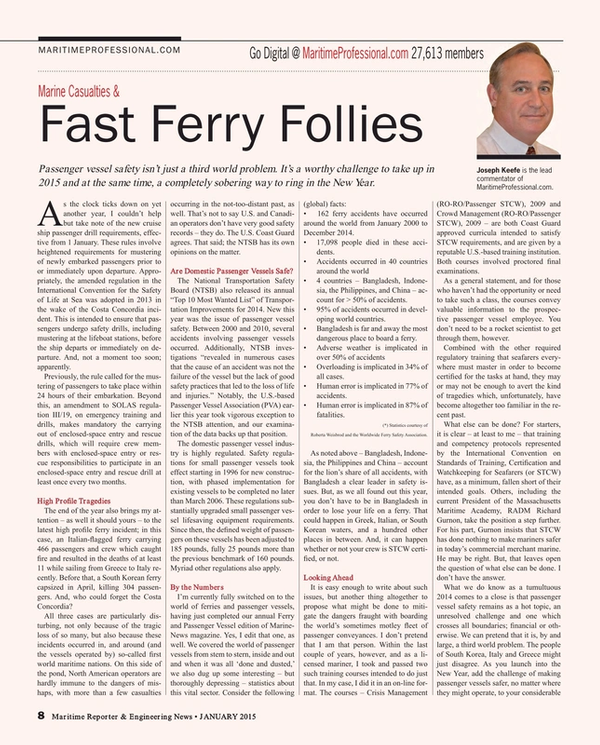