During the past 15 to 20 years, the s h i p b u i l d i n g industry has placed increasing demands upon the manufacturers of main steam propulsion machinery to produce equipment of increasing reliability and efficiency. During this time period, the plant power requirements have steadily increased, machinery space available has steadily decreased, cycle conditions have become more extreme, bunkering fuels have been gradually deteriorating in quality and, with the emergency of the energy crunch a few years ago, a renewed emphasis has been placed upon high e f f i c i e n c i e s .

These requirements have placed an increasing burden on the already harsh environment typical of the firesides and watersides of marine steam propulsion boilers.

To investigate the phenomena which affect boiler reliability, the Maritime Administration in early 1975 funded the first phase of a program entitled "Improved Marine Boiler Reliability." The objective of this initial effort was to investigate the main problem areas encountered in the design and operation of a marine boiler and, through an investigation of recent technical papers, ships' operating records, boiler design parameters, and fuel-oil analyses, to identify and research certain basic concepts and parameters and to explore their effect upon boiler reliability. This phase was completed in April 1976.

As a result of the investigations carried out in the initial phase, several items relating to specific areas of marine boiler reliability were chosen for laboratory- type testing both on board ship and in land-based facilities.

This second phase also was funded by the Maritime Administration and began in July 1976 and will continue until early 1978. Items under investigation in this second phase include high- and low-temperature corrosion rates of various superheater and economizer heat-transfer surfaces, investigation of superheater steam flow patterns, and analysis of marine boiler stack gas.

Superheater The primary cause of superheater tubing failure is hightemperature corrosion which is preceded by the formation of complex vanadium-based slags on tubing surfaces.

Consideration of the factors contributing to high-temperature slag corrosion of superheaters allows several recommendations to increase marine boiler superheater reliability. The objective for ships presently in service is to minimize the problems within the boiler operating and design constraints, whereas the objective for future installations could include design features, material selections and component configurations which may minimize the causes of the problem. There is no single optimum solution to the high-temperature slag corrosion problem; however, the first steps must include the specification of the superheater tubing environment and reliability requirements by the boiler purchaser. The environment is specified by the quality of fuel available in the ship's operating area and the excess air level, both of which are shipowner inputs and superheater configuration and material selections by the boiler manufacturer to suit reliability requirements.

Particular attention should be given to the maintenance of excess air level in accordance with the operation and design requirements of marine boilers presently in service. Design and testing programs in the area of low excess air combustion equipment should continue and boiler designs should i n c o r p o r a t e this equipment.

Superheater tubing material selection should be determined by the environment and reliability requirements of the purchaser.

Although the use of more exotic materials enhances superheater reliability, their use may not be cost effective due to significant higher initial costs and generally longer material and fabrication lead times.

Superheater reliability also can be improved through configuration modifications or "over design." Configuration modifications include the installation of additional screen rows and the selection of multistage superheaters. The first alternative reduces the radiant heat input to the superheater and results in minor reductions of maximum tube metal temperatures ; selection of this alternative might be warranted if the use of very poor quality fuels is anticipated and if the boiler envelope will tolerate the coincident increase in superheater size. The orientation of the superheater elements themselves has a significant effect on superheater reliability.

Vertically oriented superheaters have been proven to be less susceptible to slagging and therefore are affected to a lesser degree by high-temperature corrosion than a horizontally configured arrangement. Superheater slagging also is directly affected by soot blower orientation, and in this regard it is important to have soot blower lance configured in a perpendicular fashion to the axis of the superheater elements.

The utilization of fuel-oil additives is the one remaining choice to be considered for superheater reliability improvement. Although the use of fuel-oil additives has been shown to be effective in reducing the formation of highly corrosive slags and, hence, in reducing high-temperature corrosion, an important consideration prior to their widespread acceptance and application is that of fireside cleanliness. Experience has shown that the use of fueloil additives greatly increases the solids burden of the flue gases.

It is recommended that sufficient sootblowing capacity be proved through testing prior to the endorsement of the fuel-oil additive technique to reduce high-temperature corrosion. Additionally, it is recommended that chemical additives be tested to determine which ones of those presently available and advertised commercially are the most beneficial.

At the present time, the authors' company is designing and constructing a superheater airflow model. The model will be tested to provide quantitative data on s u p e r h e a t e r steam-side flow distribution for various modeled steaming loads and superheater configurations. The major variables include location of the saturated- steam inlet, superheater pass size, desuperheater location and model flow rates.

Results of the testing program will be used to formulate a computer-based mathematical flow model whose validity will be checked by flow model testing.

Stack Gas Testing In order to define more clearly a typical corrosion environment for cold-end heat exchangers, a program of stack-gas analysis was undertaken on an operating LASH vessel. The major thrust of this investigation was to obtain sufficient information to permit the calculation of sulfuricacid dewpoints at various boiler loadings and excess-air levels. In order to accomplish this, tests for sulfur dioxide, sulfur trioxide, oxygen, and water-vapor concentration in the stack gas were conducted over a wide range of boiler loadings and excess-air levels. The boiler used for the test was a Combustion Engineering V2M8 welded-wall boiler equipped with two downward-firing steam-atomizing marine oil burners, a steam air heater, and an economizer.

Over the course of five days, extensive testing and shipboard analyses were conducted at a variety of boiler loads and excess air levels, including a series of tests during minimum load conditions in port. Two representatives from Combustion Engineering's Field Testing and Performance Results Group performed the highly specialized gas analysis tests. A third technical representative coordinated the test program with the ship's engineering staff and maintained boiler performance records.

While the dewpoint temperature of sulfuric acid vapor may be an important parameter in determining the temperature below which condensation of acid is expected to occur, the most significant factor determining the service life of heat-recovery equipment is the rate of corrosion of the heat-exchanger surface.

There are, however, no accepted methods for predicting by calcu- lation the lifetime of particular materials in corrosive flue-gas atmosphere.

Information of this nature can be derived only by experience with the particular material within an environment which closely approximates actual operating conditions. This portion of the R&D effort involved first investigating published data dealing with the corrosion of various Built-in abrasion resistance enables Samson Dura-Plex Braid to stand up to chafing, scraping, and rubbing longer than any other barge line you can use.

Dura-Plex has the guts because it's a 12-strand braid with each strand having a tough polyester jacket over a polypropylene center. These "composite" strands are then braided together using Samson's exclusive patented Parallay™ construction.

Result: Dura-Plex is an exmaterials in an industrial or utility boiler environment. In the second phase, corrosion rates are currently being investigated on an actual operating marine boiler in order to obtain data to compare with current published information.

Design Considerations Unlike the other portions of our boiler reliability investigations, this area of consideration represents a survey of present and past practices associated with tremely durable and strong rope. Stronger, size for size, than 3-strand Manila, polypropylene, or other synthetic blends, Dura-Plex can handle significantly higher working loads.

Samson Dura-Plex also provides four other important features for barge lines. It has lower stretch than other ropes, which means low snapback.

Firm, round construction holds better on bitts and cleats.

Torque-free and non-kinking the design of fuel-oil burners and a s s o c i a t e d combustion-chamber characteristics. Adherence to general guidelines, supplemented by certain analytical procedures and tests, has been the design approach utilized when dealing with an area as technically complex as oil-burner performance and furnace design.

The design of burners and their component parts has been a product of theoretical studies, empirical testing and operating results.

It is generally difficult to predict how a newly designed burner will operate and only testing and actual use of the burner can prove its merits. Since a burner is basically a combination of three major components — the fuel atomizer, the diffuser, and the burner throat — the design of each must be given careful consideration.

The configuration of marineboiler furnaces has changed over the years from a refractory-lined box, used with the earliest coalfired watertube boilers, to furnaces which are virtually all water cooled.

Bunker C Fuels The bunker C fuel used in marine boilers is a nonspecification fuel composed primarily of residuum, a substance left from various refinery processes and distillate to obtain a blend reasonably similar in characteristics to No. 6 specification fuel. Because bunker C fuels are made up from the residue of refining processes, they are inherently varied in chemical makeup due not only to the geographic sources of the crudes from which they are derived but also to the cracking process used.

There is a paucity of published information on sulfur and trace metals content of bunker C fuels available in bunkering ports. Although ships collect fuel samples during bunkering, very few samples are tested unless a serious problem occurs. Consideration of the need for this information in boiler reliability predictions of superheater and cold-end heatrecovery equipment resulted in a bunker C fuel sample collection and analysis program.

It is recommended that ship operators and the marine industry monitor fuel quality so that suitable equipment procurements may be made to accommodate this condition.

Summary The objective of this paper has been to examine several parameters dealing with boiler design, materials selection and operating environment which have a significant effect on overall marine boiler reliability and to present the R&D effort that is currently underway. The ultimate aim of this effort is to present information which will allow the purchaser of steam generating equipment to specify certain design and material features in a marine boiler which should enable the boiler operator to obtain a higher degree of boiler reliability, thereby reducing unscheduled outages and decreasing maintenance costs.

The ongoing shipboard and laboratory testing described should produce information of the same type and caliber which deals specifically with marine components and operating environment as is available to shoreside operators.

Results of these investigations will be made available periodically during the next two years through the Maritime Administration. 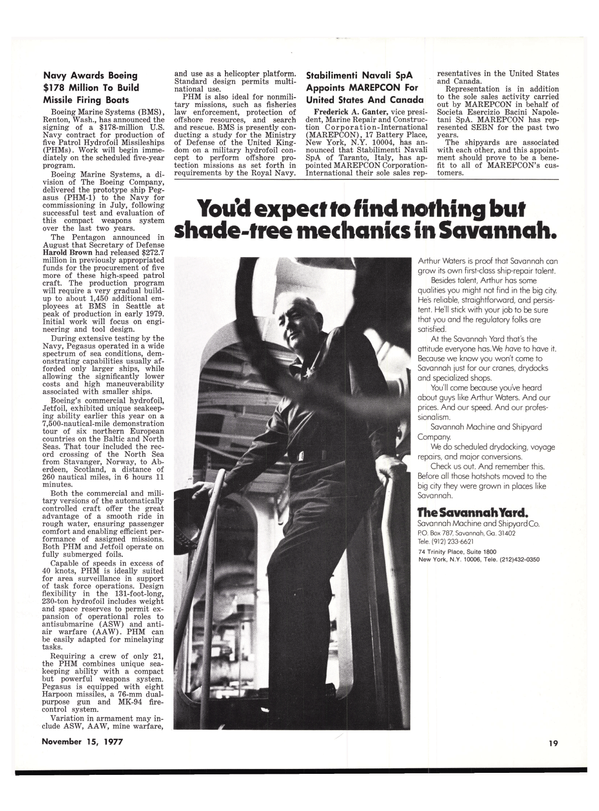