Following on Ocean's announcement of an order for three 20,000-dwt cargoliners to be built at Scott Lithgow's yard on the Clyde, Ocean Transport & Trading Limited, India Buildings, Liverpool L2 ORB, England, recently announced further details of its retonnaging program for the liner trades.

Two multipurpose ro/ro ships are being ordered from Mitsubishi Heavy Industries (MHI) of Nagasaki, Japan, for delivery in early 1979.

In addition, three semicontainer/multipurpose cargoliners are being purchased from the West German shipowner and shipbroker H. Schuldt of Hamburg, for delivery in late 1978 and early 1979.

Speaking about the ro/ro ships, C.D.

Lenox-Conyngham, Ocean's executive director responsible for liner trades, said: "It is likely that we will use them in the Barber Blue Sea Line Service. This is a trade which increasingly is being served by larger and more sophisticated ships, and therefore it was important to obtain early delivery dates for these vessels. Mitsubishi was able to offer us competitively priced ships for prompt delivery, since the shipyard was already building a series of vessels of similar design." Barber Blue Sea currently operates services between the United States, Canada, South America, Panama and the Far East.

The three semicontainer/multipurpose 12,000-dwt cargoliners being purchased from H. Schuldt are likely to operate primarily in Elder Dempster's West African trades. The ships are similar in design to the two "S"-Class cargoliners Shonga and Sherbro, which have been operated very successfully by Elder Dempster in the UKWAL Express Service from London/Liverpool to Lagos in Nigeria, since their entry into service in 1974.

The ships are being built in the Szczecin Shipyard in Poland for H. Schuldt.

Technical Details Of The Multipurpose Ro/Ro Vessels The multipurpose ro/ro vessels will have a slow-speed diesel main engine with a maximum power rating of 30,150 bhp. The engine room will be designed for unattended operation with Lloyd's Register UMS classification.

A hoistable cardeck will be installed under the main deck. Deck access will be mainly by fixed ramps, and movable ramp covers will be fitted in order to make maximum use of the deck area.

The accommodation will be raised above the weather deck so that underneath there will be room for two tiers of containers.

The ships will be fitted with a deck crane with a lifting capacity of 40 tons, which is being installed to facilitate the handling of 40-foot containers.

The stern ramp will be the largest of its type currently constructed. It will be approximately 164 feet long and have a minimum clear width of about 39 feet.

Technical Details Of The Multipurpose Cargoliners The semicontainer / multipurpose cargoliners will be capable of carrying up to 410 twenty-foot containers, or a combination of containers and general cargo.

They will be 12,000-dwt vessels fitted with a Sulzer main engine developing 9,900 bhp, and giving a service speed of about 18 knots.

A bow thrust unit will be fitted together with a variable pitch propeller, which is operated from the bridge. A flume tank stabilization system will be fitted.

The new ships will have uprated derricks compared with Shonga and Sherbro. They will be fitted with six 36-ton derricks.

The hatch arrangement on these ships has also been modified to allow them to carry a larger number of 40-foot containers. 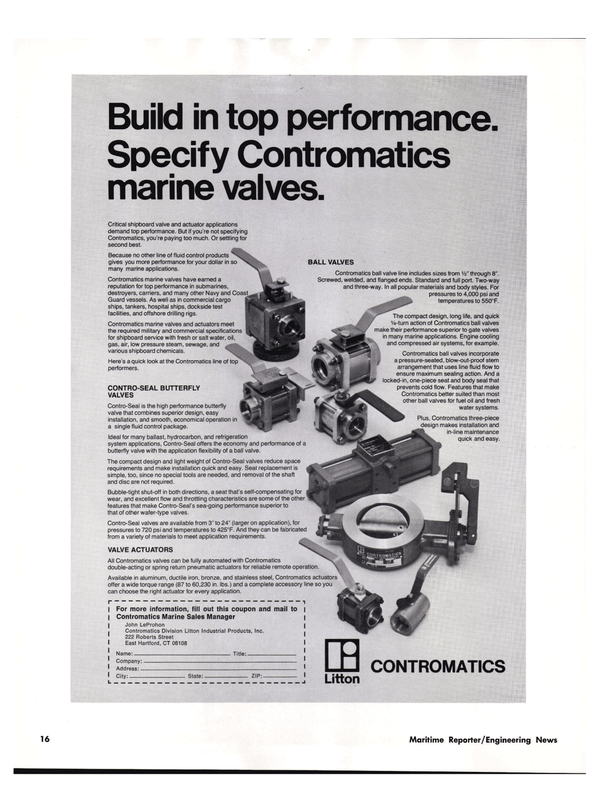