Sun Shipbuilding and Dry Dock Co., Chester, Pa., has consolidated all its marketing activities into a single Marketing Department under Joseph J. Kleschick, vice president-marketing. This move brings together in one department all the marketing activities formerly associated with the shipyard's General Cargo Ship and Bulk Ship Product Groups, as well as the Ship Repair Sales and Industrial Products Sales Programs.

Mr. Orth has been named general sales manager of the shipyard's Sales Department, with responsibility for Sun Ship's sales efforts in the New Ship, Ship Repair and Industrial Products areas.

Mr. Winstead has been named technical director for the Product Engineering Department and is responsible for the naval architecture and marine engineering for vessel concept and definition, construction specification, propo- sition engineering and customer technical liaison.

Mr. Hunt has been named manager of the Business Development Department, with responsibility for market research and competitive analysis.

Mr. Orth is a 1960 graduate of the University of Delaware with a B.S. degree in mechanical engineering.

He worked for Wiley Manufacturing of Port Deposit, Md., from June 1965 to January 1975, with his last post being general sales manager.

He joined Sun Shipbuilding in February 1975 as marketing manager for the General Cargo Ship Product Group, with responsibility for the Group's transportation research, product service and financial analysis function.

Mr. Orth is a member of The Society of Naval Architects and Marine Engineers.

Mr. Winstead graduated from the University of Virginia in 1950 with a B.S. degree in mechanical engineering and attended the University of Michigan, Graduate School of Business Administration, Executive Development Program.

He joined Sun Shipbuilding in June 1975 as engineering manager for the Tanker Group, with responsibility for all the Group's engineering activity, including preliminary and contract design.

Mr. Winstead is a member of The Society of Naval Architects and Marine Engineers and The Propeller Club of the United States.

Mr. Hunt served as an engineering officer in the U.S. Navy from December 1952 to February 1954.

Following the service, he was employed by General Electric, where he had various assignments in design, testing, marketing and installation, as well as experience with marine equipment, large steam turbines, nuclear nuclear propulsion and heat recovery steam generators. He was also the project manager for the development of the MST 14 Reheat Propulsion System. His last post with GE was manager of Quality Control and Test Facilities for the Marine Turbines and Gear Department at the General Electric plant in Lynn, Mass.

Mr. Hunt joined Sun in August 1975 as manager of Machinery Sciences, and was responsible for scientific and technological developments in ship design, shipbuilding and vessel operation in the areas of powerplant technology, automation, instrumentation and communications. 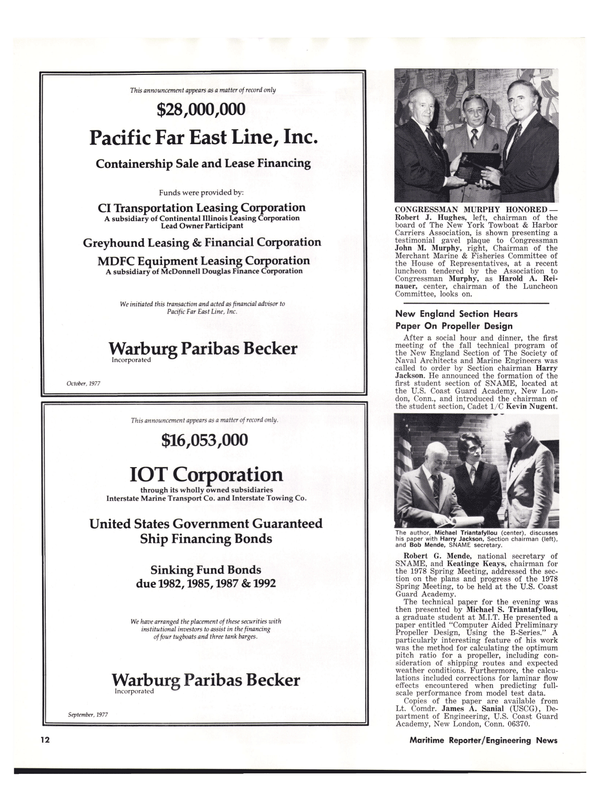