Three of the shipbuilding firm's departmental managers have been appointed directors also.

Carrington Slipways' founder-chairman J.F. Laverick, who was the third member of the original board, died in April.

D. Laverick said the appointment of new directors was aimed at widening the expertise of the board.

The firm would remain a family company.

There were no plans to make it a public company.

Mr. Dalby is the senior partner of N.L.

Dalby & Co., a Newcastle firm of chartered accountants. He is consultant to Touche Ross and Co., an international firm of accountants, and a director of several Newcastle companies.

He has been auditor and financial adviser to Carrington Slipways for more than 20 years, and an accountant in Newcastle for more than 40 years.

He was appointed commercial manager in 1975, and is responsible for the company's financial operations, including evaluation of prospective capital expenditur Mr. Higgins has been with Carrington Slipways for 14 years, starting as a boilermaker at the former Carrington yard. He became shipyard manager in 1974, and controls all production activities.

Mr. Moir joined Carrington Slipways in 1969, with responsibility for estimating and planning. Six years ago, he became contracts manager and supervises all tendering, contract negotiations and contract details through to a ship's delivery.

He started in the shipbuilding industry as an apprentice shipwright in a naval shipyard at Rosyth in Scotland, coming to Australia in 1966. Before joining Carrington Slipways, he was assistant manager of Bundeng Shipyard at Bundaberg. 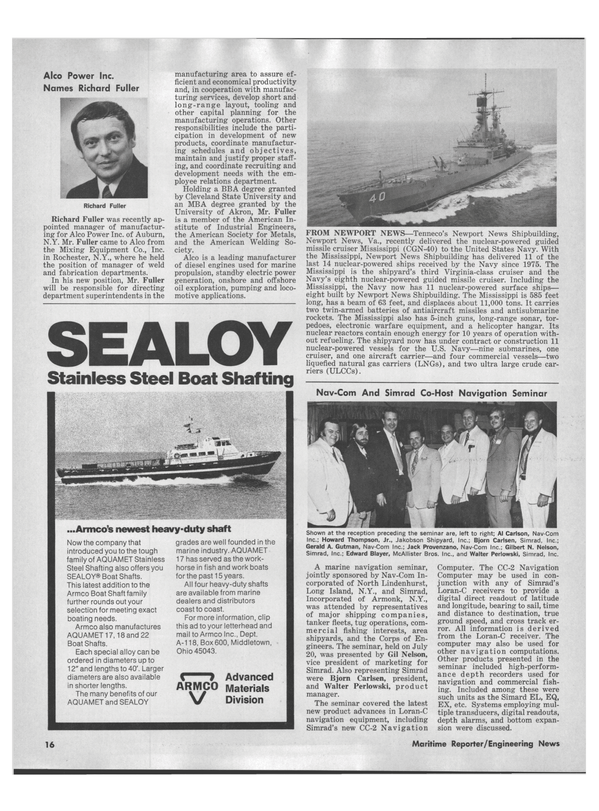