Proving that the sum of the parts is greater than the whole is by no means an easy task. Yet this challenge was successfully undertaken during a two day private seminar recently sponsored by Nav- Com Incorporated in Washington, D.C.

The premise which served as the basis for most of the presentations was that a combination of equipment and/or data, when properly integrated and displayed, would yield more accurate and usable information . . . faster. This new information would, in turn, have a very positive effect on vessel operating efficiency and hence profitability.

COMNET: INTEGRATING INTERNAL & EXTERNAL COMMUNICATIONS While shoreside managers have long recognized the need for fast, versatile communications inside the office and around the world, ships officers continue to survive with only a collection of marginal communication tools.

For many vessels, internal communications needs are served by sound powered telephones, handheld radios, perhaps a few hailing/ paging stations, possibly a watch alarm system and on some ships, the old voice tube. Not exactly state-of-the-art. More importantly, not very effective. It is hard to imagine that even today, using the ship's look-out to call the next watch is common practice!

Unfortunately, even though the services of the Marisat system have been absorbed and greatly expanded by today's Inmarsat organization, full advantage hasn't been made of the system's total capability.

The Comnet system introduced by Nav-Com during EXPOSHIP NORTH AMERICA last March provides a complete integration of internal and external communications devices. In its most comprehensive configuration, COMNET includes an electronic telephone system to suit any required number of extensions and outside trunks, a call logger, digital facsimile transceiver, hailing/paging system, Displayphones, MX-211A Inmarsat terminal, and a BUSISHIP vessel management work station. COMNET allows all outgoing and incoming SATCOM calls, as well as inter-vessel calls, to be routed automatically without operator intervention.

Attendees were able to observe data flow from shore-to-ship and ship-to-shore by watching an IBM PC adjacent to the BUSISHIP work station which served as the "office station". A variety of "In-House" developed application software was also exhibited. The combination of all the hardware and software elements integrated into one system by Nav-Com and supported by the world-wide network of Magnavox Service Representatives provided a "one stop" solution to the communications problems troubling many of the attendees.

Circle 2 on Reader Service Card In addition to their own integrated systems, several of Nav- Com's major principals were invited to give similar technical presentations.

Though not presently accepted by the FCC for maritime use, AUTOLINK is currently available for a variety of applications including point-to-point communication systems, tactical HF network broadcasts and computer-controlled frequency management systems.

Circle 3 on Reader Service Card COLOR GRAPHIC DISPLAYS Furuno's name has become synonomous with excellence in the marine electronics industry. For the last seven years, the National Marine Electronics Association has consistently bestowed Furuno products with honors. Their qualifications made them an excellent choice to address the advent of color graphic displays in marine electronics. Furuno offers a full line of color radars, sounders, current indicators, sonars and plotters.

Furuno's GD-2000 color video plotter attracted a great deal of on-lookers during the demonstration portion of the program. The unit features all the benefits of active color radar and Loran/Sat- Nav or Omega navigation systems combined on a single, high brightness 14 inch CRT. On one screen you can see a radar picture where the colors indicate returned echo strength, plus an electronic video plot of your navigation system input.

In keeping with the program's concentration on the usefulness of integrated systems, Furuno was quick to reiterate their company's commitment to providing as much information as possible on compact, easy-to-read displays. All of their navigation aids are designed to facilitate easy interface with one another.

Also on display from the Furuno product line was the FCV-121 color video sounder. This unit permits split-screen display of dual frequencies, normal and expanded scales, outputs from up to five other sounders or sonars, plus ship's speed and Sat-Nav or Loran position.

Comprehensive information displayed at a single, centralized location, and in a format that is easier to use.

As an added inducement, attendees were advised that many Furuno products are offered on the G.S.A. schedule (contract number GS00K8401S0401) which provides "most favored customer" pricing to the Government sector.

Circle 4 on Reader Service Card INTEGRATED CARGO LOADING & BALLAST CONTROL Kockumation of Malmo, Sweden is one of the world's leading innovators and producers in the field of automated marine equipment.

Systems solutions are a key concept at Kockumation.

The presentation given by Kockumation at the Nav-Com Seminar centered around the NLM 200 level-gauging system. The NLM 200 provides the flexibility to choose the best sensor for each application.

There is virtually no limit to the different types of sensors that may be required. A tailor- made, automated system is developed for each type of ship.

Level-gauging in cargo tanks is highly specialized. Sensors vary widely with the commodities being carried. For example, aboard chemical tankers, sensors in contact with cargoes are made of stainless steel. Performance must be independent of viscosity, temperature, foaming surfaces and reflectivity to provide maximum safety. Aboard crude oil or product carriers, Kockumation offers a Magnetic Float Gauge. This new technique is rugged enough to operate during tank washing and at sea without being damaged. In the miscellaneous vessel service tanks, a variety of pressure transmitters are used to sense levels of fuel oil, lube oil, freshwater and ballast.

The NLM 200 video display units are compact for easy positioning at various points aboard ship. The clearly laid out panels provide continuous analogue information at up to 100 levels, along with alpha- numerical information on alarm levels, temperatures, weights, volumes and other vital data. All indicated levels can be corrected for trim and list at the push of a button.

For maximum safety and convenience, all tank levels can be transmitted to the Loadmaster B24 for on-line calculation of the vessel's stress and stability. By incorporating control of valves and pumps, the system can be extended to an integrated Cargo Handling System.

For those vessel operators wishing to employ Kockumation's expertise in calculating stress and stability but not wanting to purchase a dedicated loading instrument, Kockumation is now offering software for use with Nav- Com's BUSISHIP work station.

The combination of two major marine electronics companies strengths provides a versatile, multi-purpose vessel management system which can be supported around the world!

Circle 5 on Reader Service Card BOWDITCH NAVIGATOR Introduced as one of the most significant advances in navigation, this automatic visual positioning aid does offer some unique capabilities. The Bowditch Navigator provides the bridge team with a continuous automatic display of the vessel's position on a standard nautical chart. As an integrated navigation system, the watch officer can select an operating mode of Loran, Satellite, Omega, Decca or Dead Reckoning and the vessel's position will be updated by that mode's incoming data.

The visual display of ship's position on the nautical chart is derived from an optical projection of a "microchart" onto the unit's viewing screen. An extremely precise XY mechanism positions the microchart behind a cross hair on the view screen which represents the "own ship" position. These microcharts are permanently mounted in durable cassettes and are selected for a specific coverage area and scale in the same manner as a corresponding paper chart.

Passage planning features include manual entry of bearing fixes, waypoint sailing, and navigational hazard markings. If desired, course to steer information can be provided to an autopilot.

Circle 6 on Reader Service Card SUMMARY OF CURRENT SYSTEMS PROJECTS As a summary to the technical session, Nav-Com re-emphasized the benefits of integrated systems by describing several projects for which their engineering services had been contracted. Their most recent project involved the most sophisticated yacht ever built in the United States. Reading from an equipment list five pages long, nearly every element discussed during the seminar was included onboard the motor yacht "Grand Cru". In addition, a vessel monitoring system will check over 260 points throughout the vessel.

Jack Provenzano, Nav-Com's executive vice president and director of engineering, stated that the vessel could be operated, safely and efficiently by a crew of one. 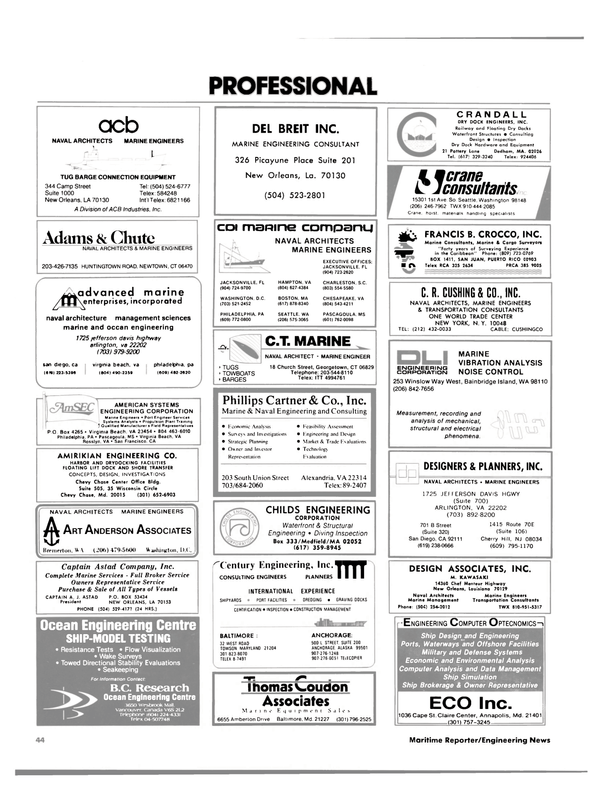