of Hamburg, the West German shipping company that operates worldwide services. Christened Humboldt Express and Cordillera Express, they each have a capacity of 1,938 TEUs in six cellular cargo holds and on deck. These sophisticated vessels were designed and built under the rules of Germanischer Lloyd, and are classed + 100A4, E, MC, AUT, Multi-purpose Container Vessel.

These ships are diesel-propelled, single-screw cellular containerships of 34,000 dwt. A traveling gantry crane is installed on the main deck for self-loading/unloading of boxes and breakbulk cargoes, making them independent of shoreside cranes. With a con-air ducting system installed, they can carry up to 262 TEUs of reefer containers in the hold, and up to 100 TEUs of integral reefer boxes as deck cargo.

The ship has an overall length of 675.14 feet, beam of 105.64 feet, depth to main deck of 61.68 feet, and design draft of 30 feet. Accommodations are provided for a crew of 33, all in private cabins that were installed as prefabricated units.

Humboldt Express is propelled by a low-speed Hyundai/B&W 5L90GBE diesel engine with a maximum continuous rating of 19,800 bhp at 97 rpm, direct-connected to a five-bladed, highly skewed Ostermann propeller via Kobe Steel shafting. Operating at 85 percent of mcr, service speed on a draft of about 30 feet is 18.4 knots. Cruising range at the service speed is 20,000 nautical miles.

The main propulsion engine is designed to burn heavy fuel oil at a rate of 46.5 metric tons per day.

The most -unique feature of these new Hapag-Lloyd ships is the asymmetric afterbody hull form, newly developed by Ernst A. Nonnecke of Hamburg in cooperation with the Hamburg Ship Model Basin. Though it looks unconventional below the waterline, the new stern has already proven its advantage in cutting fuel costs by up to 10 percent.

The ships now being built with the asymmetric stern are all destined for German owners. In addition to the Hapag-Lloyd ships, nine vessels are being built in Brazil for three different German owners, all with a capacity of 700 TEU. The first vessel built with this unique afterbody was a 502- TEU containership constructed at the Heinrich Brand Shipyard in Oldenburg, West Germany. An ice class cargoliner is being built at the same shipyard, and several other vessels that will have the asymmetric stern are now being constructed or programmed for German owners.

Though the asymmetric stern is slightly more complex and therefore a little more expensive to construct, the extra cost of the ship is recovered rapidly in fuel savings.

As international shipowners become increasingly aware of the German development, the asymmetric stern may well become as common as the bulbous bow is today.

Development work on the new stern design has taken place at the Hamburg model basin over the past 10 years, but it is only the recent steep rise in fuel costs that has brought its advantages home to German shipowners.

Electric power for the Hapag- Lloyd ships is provided by Fuji equipment—two 1,500-kw diesel generators, one 2,200-kw generator, and one 115-kw emergency generator. Steam generation is by an Aalborg oil-fired boiler and an exhaust gas boiler. Two ballast pumps each have a capacity of 600 cubic meters per hour. 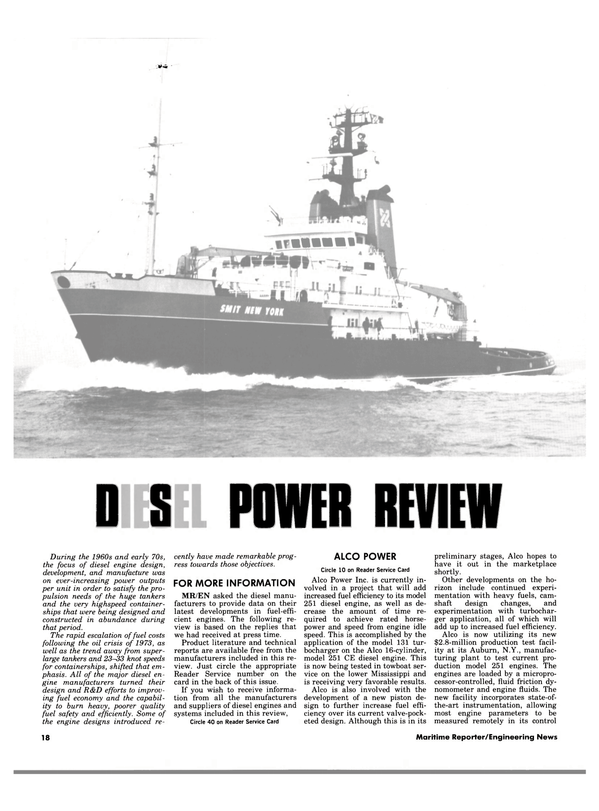