Held biennially on the grounds of the Hamburg Messe, SMM, or the Hamburg Show as it is commonly referred to, is expected to draw more than 500 international exhibitors, a large percentage of which will be from the shipbuilding industry.

Combined with the numerous equipment manufacturers in attendance, the shipyards will display not only their building programs, but also the latest innovations and advances in the fields of marine and offshore technology.

With a strong and wide-ranging spectrum of exhibits, SMM has to be considered one of the leading international maritime market shows.

This year a parallel series of lectures, presented as part of the 2nd German Hydrographies Conference 1990, will be held in conjunction with the congress. The theme of the lectures will be "Hydrographies and Environmental Protection." The first day of the conference will deal with the challenge faced by biological oceanography in the light of the changes to the environment and also present a comparison of the problems of the North Sea and the Baltic. In addition, there will be a report on the Seas Environment Data Bank.

The second day of the conference will address the implementation of practical measures, such as remote exploration of the seas using radar techniques and a hydrographic measuring system for coastal waters that is operated from and processed aboard helicopters. An additional topic will be marine environmental protection from the perspective of industry. Numeric models will be presented as a possible way of simulating the spread of pollutants in the sea.

The observation of oil slicks in the North and Baltic Seas and their control from the air, as well as Naval cooperation in such measures, are other subjects that will be handled by the Hydrographies Conference.

One talk at the conference will address questions of environmental protection and the surveying of the "National Park," an extensive sea and coastal area stretching from the Danish to Dutch border. This area contains a great variety of bird sanctuary islands and protected mud flats'.

The series of lectures closes with a talk on "Principles for Assessing the Need for Cleaning the Seas." The location of the 2nd German Hydrographies Conference is the SAS Plaza Hotel Hamburg, which is situated next to the Fairground.

The SMM Congress, which is being managed by Prof. Fritz Sandmann, will discuss, "Technical Progress—Environment-Efficiency: A Challenge for Marine Technologies." Over 30 well-known speakers from the shipping ship construction industries will hold lectures.

The congress topics will focus on ship technology, operational technology, offshore and port technology, and will cover all of the latest developments in these fields. Particular emphasis will be on safetyrelated and environmental technology.

The congress will try to demonstrate that the new standards being developed as a result of increasing levels of environmental pollution need not stand in the way of economic efficiency. Technical developments aim to achieve, in the near future, the required levels of safety and environmental protection despite reduced manning levels on ships and platforms.

As the global platform for shipbuilding, SMM will include a major presentation by German shipyards and equipment manufacturers. The exhibition will not only include West German yards and manufacturers, but also their East German counterparts.

Jurgen Begemann, directorgeneral of the state-owned Ship- building Combine, referred to the fact that the DDR was participating at SMM for the fourth time since 1982. It was, he said, an important forum for the East German shipbuilding industry (which became an associate member of the German Association of Shipbuilding and Marine Technology this year), and the country's maritime transport and port sectors.

In addition, the DDR will be offering ship's equipment, rationalization concepts, a software package and lifesaving gear. At a press conference, Helmut F.H. Hansen, chairman of the Port of Hamburg marketing and public relations board and of the SMM exhibitors' advisory council, noted that this 30- year-old exhibition has grown into an event of international significance.

Dr. Norbert Henke, chairman of the German Association of Shipbuilding and Marine Technology, expressed his hope that there would be only one German shipbuilding industry in the future.

At the same press conference, Dr.

Norbert Kliemann, managing director of C. Plath Navigation-Automation and a member of the board of the working group for the Marine and Offshore Equipment Industries in the German Machinery and Plant Manufacturers Association, pointed out that equipment manufacturers accounted for up to 70 percent of the value of a ship. Furthermore, the economic efficiency of ship's operations was largely dependent on the quality of the equipment manufactuers' technical concepts.

Besides an extensive display of shipbuilding and marine equipment, the congress will focus on the production and transportation of raw materials from an environmental standpoint.

A top international attendance is expected to be at the congress.

For information on and registration for the 2nd German Hydrographies Conference, contact: DHYGGeschaftsstelle C/O Hans-Fr. 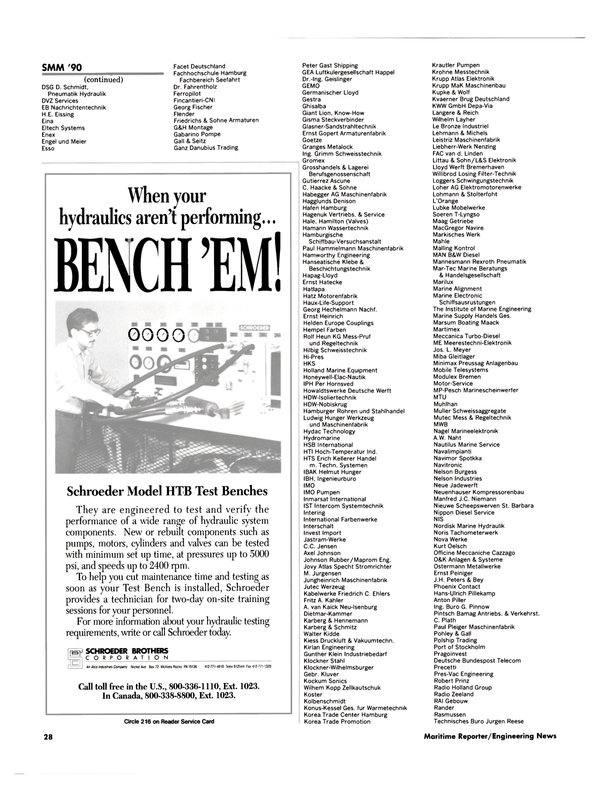